House and Plantation of a Chief of the Island of Otaheite, 1773 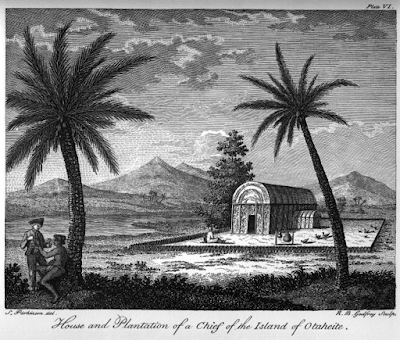 "House and Plantation of a chief of the Island of Otaheite," drawn in 1769 by Sydney Parkinson, engraved in 1773 for A Journal of a Voyage to the South Seas, in His Majesty's Ship, the Endeavour by R. B. Godfrey, National Library of Australia. 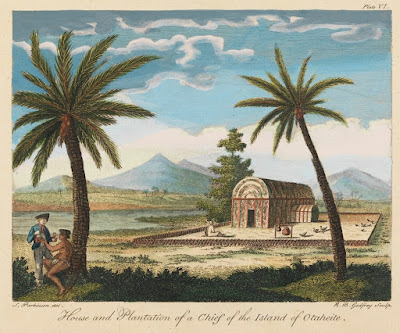 "House and Plantation of a chief of the Island of Otaheite," drawn in 1769 by Sydney Parkinson, engraved in 1773 for A Journal of a Voyage to the South Seas, in His Majesty's Ship, the Endeavour by R. B. Godfrey, State Library of New South Wales.

A quick shout out to The 18th Century Material Culture Resource Center. It was through the recent slideshow on Captain James Cook and his first exploration expedition that I stumbled across this image. Be sure to swing by there for a lot more.

Holding a bottle to his chest and a glass in his hand, a sailor converses with a Tahitian man who reclines against a palm tree. They are remarkably dissimilar in appearance: the sailor in his slop clothes and the Tahitian in his cloth. 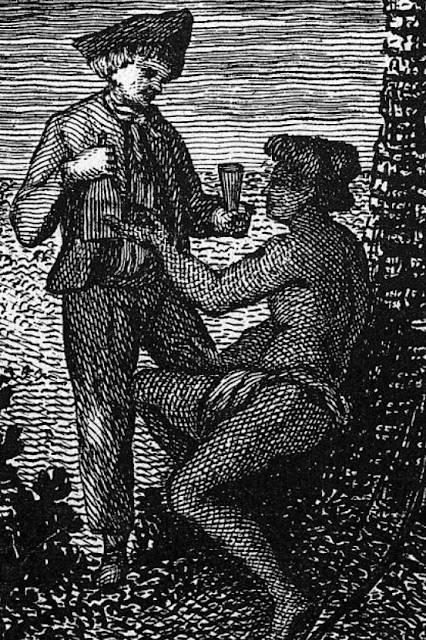 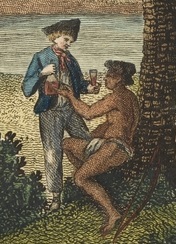 The sailor wears a blue short jacket that is not illustrated with buttons, pockets, or distinct cuffs. His black cocked hat is pointed forward and sits back a bit on his short blond hair. Our mariner is without a waistcoat, but wears a plain red neckcloth over his shirt. Jack's plain white trousers end about the bottom of the calf, revealing white stockings.
Posted by Kyle Dalton at 8:29 AM No comments: 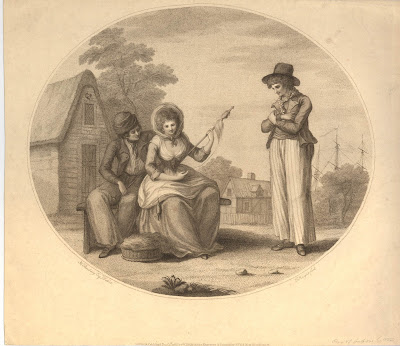 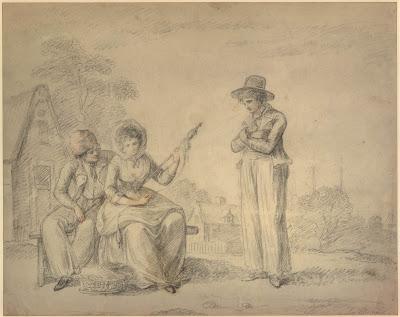 William Henry Bunbury gives us a pleasant domestic scene of two sailors and a handsome young woman. She spins while they pay her their attentions. The tar on the left wears a happy expression, the personification of love. The standing mariner looks a bit perturbed, and thus represents jealousy. 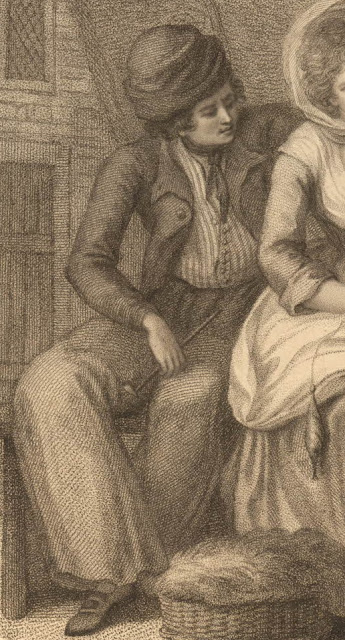 What I find interesting about the sketch and the engraving is how little difference there is between the two. Love wears a linen cap and short curly hair. Around his neck is a tightly tied black linen neckcloth that hangs over a single breasted horizontally striped waistcoat that is tucked into his plain trousers. Love's double breasted jacket fits closer around the wrist, but the legs of his trousers are remarkably wide, hanging over his pointed toe shoes with rectangular buckles. In his right hand he holds a long pipe.

Once again, there is little or no real difference between the sketch and the finished engraving. Jealousy wears a round hat with narrow brim and tall cylindrical crown. His hair is as short as that of Love, and he wears a striped neckcloth. Like his mate, Jealousy wears a jacket that fits right around the wrists, but I cannot be sure if it is single or double breasted (I am inclined toward the former). It appears he may be wearing a sash, something more common among French mariners than English, and (it is worth noting) also appears in Bunbury's "From a Sketch Taken at Portsmouth," printed the year before. He wears a pair of long trousers that hand just above the ankle, and bear narrow vertical stripes. Jealousy's shoes match those of Love.
Posted by Kyle Dalton at 9:19 AM No comments: