The Sailor's Hornpipe is arguably the most recognizable maritime tune in popular culture. Whether you've heard it at the Last Night at the Proms or at the very beginning of a Popeye the Sailor cartoon, you probably know the tune by heart. Given how prevalent the song is, and how dominant nineteenth century maritime music is today, I was surprised to learn that the tune dates to my period of study. 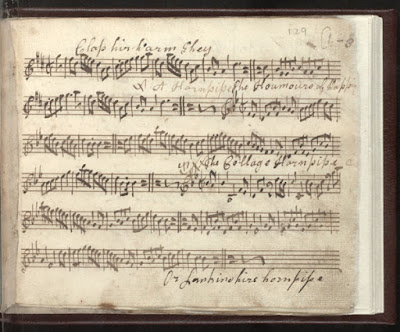 The above image is a scan of William Vickers' 1770 songbook, containing the original tune, from the Folk Archive Resource North East database.[1]

Follower and champion Scottish fiddler David Gardner was kind enough to record his performance of this page, including the first two tunes: 'Clap hir Warm They,' and 'The Humours of Wapping.' In David's performance you can hear a few differences between this original manuscript and the tune as we know it today, but it is undeniably the same song.

At the time it was called the College Hornpipe or Lancashire Hornpipe. Why, then, do we now refer to this tune as The Sailor's Hornpipe? Because sailors and hornpipes became inseparable in the eighteenth century.

A hornpipe is a dance typically performed by a single dancer in hard shoes. It has been suggested that the dense and crowded footsteps of the hornpipe lent itself well to shipboard performances due to the confined space afloat, though I can't say for certain if that is true. The term 'hornpipe' may also refer to the music that accompanied the dance, as is the case with the song above. Several secondary sources state that the hornpipe was not associated with sailors until 1740 when a hornpipe was performed 'in the character of a Jack Tar' at Drury Lane during the second act of The Committee, or, The Faithful Irishman.[2] 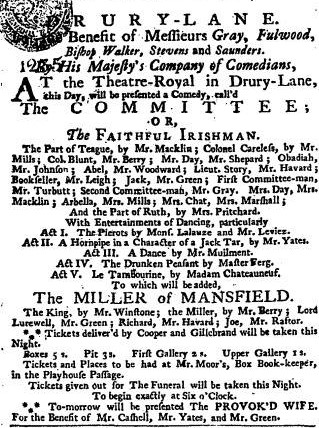 The play was well over a century old by 1740, and from all the editions I've skimmed through, I've found no mention of Jack Tar as a character. Even a much later version of the same play lacks that character. This is not wholly surprising. Eighteenth century theatrical performances often had dances between the acts, or to open and close a performance, that were unrelated to the narrative as a way of adding variety. So why was Jack Tar suddenly dancing the hornpipe in 1740?

Probably because the character of Jack Tar was gaining prominence in the popular consciousness. I asked collector and historian Casey Hill, who runs the War of Jenkins' Ear Facebook page, about why Jack Tar was becoming popular in 1740: 'I think a lot of it had to do with Admiral Vernon's victory at Porto Bello in 1739. That really boosted national pride specifically within the Royal Navy.'[3] His argument largely echoes that made by Paul Gilje in his To Swear Like a Sailor: Maritime Culture in America, 1750-1850. In Gilje's eyes, the association of the sailor and the hornpipe is one event in the rise of the character of Jack Tar.[4]

The association between mariners and the hornpipe was also present in art. The caption to the 1743 print of Humours of a Wapping Landlady declares that 'Tom Gunter bids the Fidler strike up a hornpipe which he fools about with such agility.' It is possible that this print, and more importantly the painting it was based on, were derived from The Humours of Wapping recorded on the very same page as The College Hornpipe in the 1770 manuscript by William Vickers above, further cementing the sailors to hornpipes. 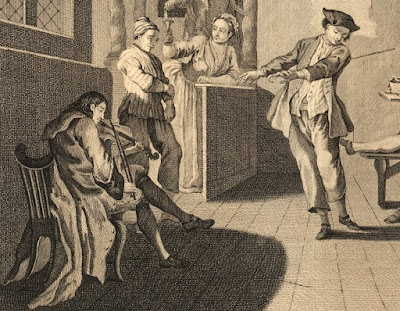 The association of the hornpipe with sailors became stronger as the eighteenth century progressed. In the fictional 1762 exchange below, one gentleman expresses surprise that women would dance the hornpipe, 'appropriated to the rough sailor only.'[5] 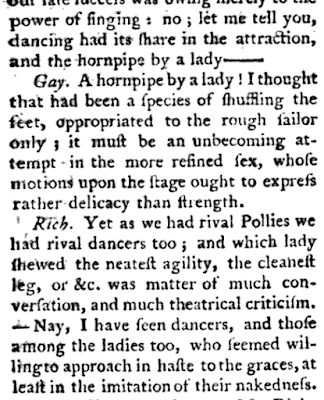 In the 1760 cartoon by Matthew Darly below, an unnamed sailor lives up to that 'rough sailor' stereotype. Boldly approaching a woman at a sermon with the ever-present stick under his arm, the tar turns his back to the famous reverend George Whitefield. The sailor declares 'I wish Nancy I had him in the Round top Id make him Dance a Hornpipe to my whistle.' Darly created a sailor who embodied the national idea of Jack Tar's character: a womanizer, violent, and irreligious. Included in that package of the cartoonish sailor is the hornpipe.

During a 1761 theatrical performance penned by the famous playwright David Garrick, an actor spoke to the diverse audience and directly affiliated hornpipes and 'hearts-of-oak,' referring to the famous song extolling the virtues of British sailors.[6] Again the character of common sailors comes to the fore: Garrick was speaking directly to the association of sailors, hornpipes, and the nation.

While often characters in plays, actual sailors were not always welcome in the theater. According to a (probably fictional) story in a 1760 edition of The Derby Mercury, a sailor and his several 'temporary Wives' attempted to enter a theater and occupy a box well above his station. When informed the performance would be 'based on scripture,' the unnamed tar declared 'we'll sheer off to Wapping, get a fiddle, drink flip, and dance Hornpipes.'[7] 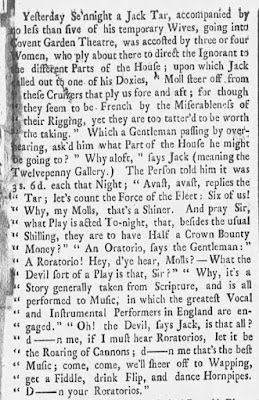 The character of Jack Tar was both something to be lauded through song and dance, and to be avoided as an ill disciplined ruffian.

Given that it was sailors who connected and protected the far flung British empire, it is no surprise that sailors' hornpipes were also performed on stage in the American colonies. Closing out the many performances being advertised in The New-York Mercury as part of a show in 1753 was 'a hornpipe in the character of a sailor by Mr. Dugee.'[8] 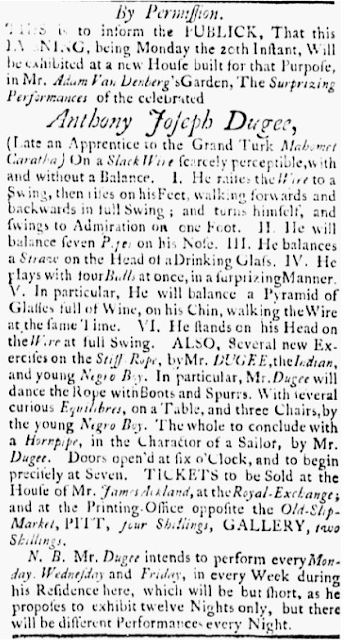 Interestingly, despite the hornpipe's affiliation with sailors, it was still performed by the higher classes. When advertising his services in Philadelphia as a dancing master in 1772, Alexander Russell promised 'Those gentlemen who choose to learn high dancing will be taught the sailor's hornpipe,' among others.[9] 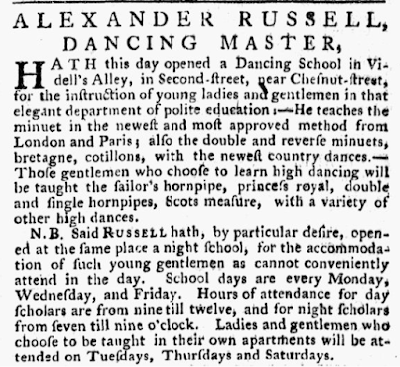 In fiction, art, and theater (both on stage and off) the hornpipe was affiliated with sailors in my period of study. Of course, popular perceptions of sailors and their behavior do not always reflect the truth. But in this case it appears that sailors did indeed dance the hornpipe.

When Janet Schaw sailed from Scotland to the New World in 1774, she kept a journal in which she described the passengers and sailors at leisure: 'We play at cards and backgammon on deck; the sailors dance horn pipes and Jigs from morning to night.'[10]

Captain Cook's sailors danced the hornpipe for the entertainment of a Pacific monarch. In August of 1773, the seamen of the Resolution performed a dance to bagpipes for the King of Tahiti and his retinue. Among the Tahitians, Cook noted a few could imitate the sailor's dances, 'both in country-dances and hornpipes.'[11]

An Irish gunner's mate aboard the Resolution named John Marra, also wrote about the entertainment for the King of Tahiti, and the delight with which the Tahitians enjoyed the hornpipe:


They were entertained and amused...particularly with music and dancing in a grotesque taste, which gave them infinite pleasure, as among other humorous performances a hornpipe was introduced, at which they could scarce contain themselves.[12]

Mary Ellen Snodgrass, in The Encyclopedia of World Folk Dance, states that Cook sometimes ordered his men to dance hornpipes for their health.[13] She also states that one of Cook's protégés, William Bligh, adopted this practice on the notorious 1787-1789 voyage. This fact borne out in this snippet from Bligh's log quoted by Caroline Alexander in her book The Bounty: The True Story of the Mutiny on the Bounty:


I have always directed the Evenings from 5 to 8 O'Clock to be spent dancing & that every Man should be Obliged to dance as I considered it conducive to their Health.[14]

Whether for work or pleasure, for themselves or royalty, sailors of the eighteenth century did indeed dance the hornpipes we are familiar with today.