Color Your Own Historic Sailor 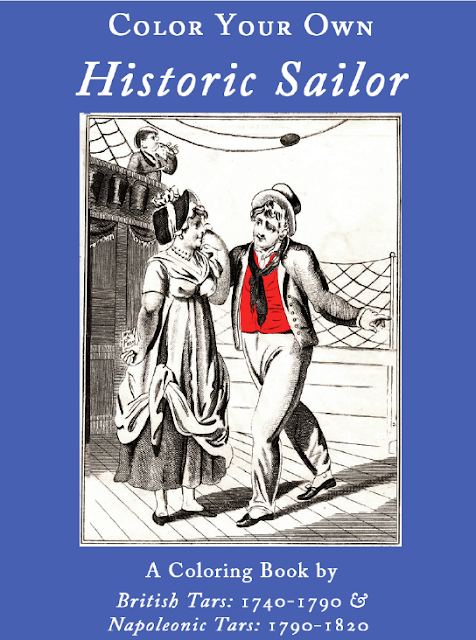 The reaction was so positive that Ben decided to make it a real thing and asked for my help. To celebrate the Glorious First of June, we are releasing this coloring book for free as a PDF. Just follow the link here to get your copy.
Included are eight black and white or decolorized original images of sailors stretching from the 1740's through the 1810's, documenting the change in mariners' fashions over that tumultuous period.
Download and print your copy, break out your preferred coloring instruments, and spend some time with us to Color Your Own Historic Sailor!
Posted by Kyle Dalton at 9:27 AM 2 comments:

Origin of a Myth: The Last Stitch

Follower Justin Anderson e-mailed me a short time ago with a specific request:


I'm curious if you have any insights into the origins of the idea that burial shrouds had a final stitch which passed through the nose? I see you mention it briefly in a post, but I can't find anywhere else where this is being discussed online with any real knowledge or academic care.[1]

It's a very prevalent tale, often shared in fiction. Both the Aubrey-Maturin and Hornblower books included it, as do their film and TV adaptations. Outlander includes a poignant scene with the same scenario.

Fiction follows the lead, in this instance, of non-fiction. The Royal Australian Navy regards the last stitch as fact. The same is true of Cdr. Connell and Vice Adm. Mack's treatment of burial at sea in Naval Ceremonies, Customs, and Traditions:


According to a very old custom in preparing a body for burial at sea, the sailmaker, when sewing the canvas shroud, takes the last stitch through the nose of the deceased.[2]

The most common version of the story goes that dead sailors were stitched up in their hammocks, weighted down with shot to drag them to the bottom (all of which is true). The last stitch of the canvas would go through the nose, supposedly because the pain would awake the sailor in case someone screwed up and he wasn't actually dead.
Certainly some sailors must have been sewn up and thrown over before they were fully dead. Evidence of this can be found in the recollections of Carl Peter Thunberg, who later remembered such an incident during a voyage to Angola in the 1770's:

Five men had been reported dead, all of them had been sewed up in their hammocks, and two had already been thrown overboard, when the third, the instant he was put on the plank, called out, 'Master Boatswain, I am alive still!' to which the Boatswain with unreasonable jocularity replied,-'You alive, indeed! what, do you pretend to know better than the surgeon?[3]

At a practical level, sewing through the nose seems odd to me. Does the sailmaker stop sewing when they reach the nose, leaving the forehead bare? Does he go back after sewing to and along the top, and then pinch around the canvas until he finds the nose so he can sew through it? Also, if a sailor suffers so much trauma as to pass into unconsciousness that was mistaken for death, it seems unlikely the pinch of a needle would revive him.

There is no evidence for putting the last stitch through the nose in the eighteenth century.

I've found no sources that mention this practice at all through the entirety of my period of study.

This reminds me of a seeming non-sequitur (that I swear is relevant; bear with me).
A historian of Eastern Asia (whose name escapes me) was talking about our popular understanding of samurai, especially the strict and reverential treatment to an unbending and universally agreed upon Bushido. That understanding is really only true for the tail end of the history of the samurai, when there was a relative peace throughout the empire and the samurai didn't have as fighting much to do. That, and after the Meiji Restoration, they emphasized 'traditional' practices (some of which they had invented) in order to preserve their quickly dissolving subculture. Because this was the period in which those practices were most likely to be recorded, documented and saved, and the period that is closest in time to ours, and especially because the samurai themselves were projecting these practices back in time and casting them as immemorial, they were accepted by historians and society as a whole as timeless.

This is also true of sailors. Most myths and misunderstandings about common sailors are backward projections by Victorian sailors. The advent of steam was rapidly eclipsing sail, and so sailors clung to what they believed to be immemorial practices that were actually quite recent. Superstition, canvas hats, the belief that women are bad luck, bell bottomed trousers, sea shanties, tattoos, an impermeable barrier between officers and crew, and all the rest were far more common in the nineteenth century than the eighteenth, and some didn't apply at all to that earlier era. By contrast, practices that were common among eighteenth century sailors fell out of favor by or through the nineteenth: frying watches, carrying sticks, short cut hair, carved or stamped leather buttons, and others.

So it's possible this was a Victorian practice, rather than a Georgian one. Where does the story come from? Was it actually a myth?

There was a good discussion of this a few years ago on the Authentic Pirate Living History 1690-1730 Facebook group, which is a surprisingly academic font of knowledge, frequented by some great maritime historians. I've also found a reference or two to the last stitch through the nose in the nineteenth century. All of the sources found by both that group and myself lean toward the fictional, and below you'll find a mix of their discoveries and mine.

It later appeared in Herman Melville's 1850 semi-autobiographical novel White-Jacket; or, The World in a Man-of-War, where he has an entire chapter titled 'The Last Stitch.': 'Small thanks I gets for my pains; and every one of 'em looks so 'proachful-like, with a sail-maker's needle through his nose.' There follows a discussion about whether or not to actually do the last stitch through the nose, with the author standing against it. The sail-maker is staunchly for it, citing 'no innowations' and 'it's a good old fashion.'[6] Again, the earliest mention yet found is from only 19 years before this novel was published.

It is possible that the practice was in place earlier than recorded, but we cannot project that without evidence. Among the many recollections by passengers, captains, and seamen of burial at sea, none mention the stitch through the nose in the eighteenth century.
In the 1881 The Boys' & Girls' Book of Travel and Adventure, an unnamed author wrote:


The thing that the sailmaker had wanted to do, was the old custom of his trade afloat, namely to take the last stitch of yarn through the nose. Without that, it used to be firmly believed that those who were buried at sea could never rest, but some time or somewhere must come up again from the deepest water.[7]

It is not clear to me if this is intended as a fictional account.

In 1894 the Journal of American Folk-Lore published a paper (but didn't cite the author) titled 'Burial Custom Formerly Observed in the Naval Service.' The very title suggests that this was not currently being practiced, and the author claims to have heard this story from a patient at an asylum. In the introduction the author was already starting to note inconsistencies in the tale. Nonetheless, he took it at face value: 'The sailmaker's mate, who performed this office, was well aware of the necessity for taking the last stitch through the tip of the patient's nose; without this precaution the body would not "stay down," however waited with shot, but would shake off the trammels of its sailor shroud, and reappear as a ghost to its former shipmates.' Even the author of this piece admits 'allusions to [this practice] in print are not very frequent.'[8]

Notably, Melville and the authors of Journal of American Folk-Lore and The Boys' & Girls' Book specifically state that the purpose of the last stitch is to prevent the ghost of the sailor from haunting the ship, rather than checking to see if he is alive. Chemier gives no stated motivation. None of these accounts claim to be an eyewitness to the practice, and Chemier is explicitly incredulous.

The only reliable account I've found of this in actual practice is from Cyril Corbet's journal, in which he wrote on March 21, 1874:


The ship's steward, a man named Frederick Garrett, was found dead in his hammock this morning...I never knew before to-day, that in sewing a dead man up in his hammock, before chucking him overboard, they put the last stitch through his nose; at least, Smith-Dorrien tells me so,-he is my authority.[9]

Even in this, which seems pretty likely to be a real story, Corbet is incredulous.
The last reference I have found to the practice is the 1960's. In a 1996 letter to the editor of The Independent, a merchant mariner stated that he watched a bosun push 'the large triangular-shaped needle right through the nose. I winced, and he looked up at me and said "That's the law of the sea, the last stitch through the nose, if that don't wake him up I know he's dead."'[10]

I do not mean to diminish the value of stories. The myths and legends of the sea do have real meaning to the sailors of the present. As a historian, it is nonetheless my responsibility to explore the realities of life in the past. Death has always been significant in the lives of sailors, and how we have dealt with mortality has changed over time.

The last stitch was not practiced in the eighteenth century, was never widespread in the nineteenth century, was always portrayed as an immemorial practice from the time of its invention, and was explicitly about ghosts until the twentieth century.