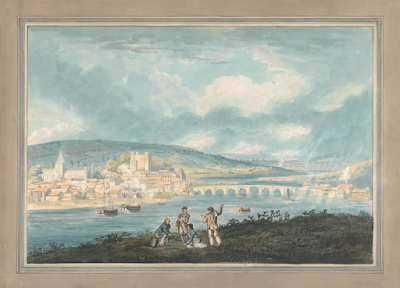 I am reluctant to include this piece. Thomas Girtin was a wonderful watercolorist who helped to elevate the medium to profound respect. At the ripe age of 19 he exhibited at the Royal Academy. As a boy, Girtin apprenticed to Edward Dayes, who was about ten years his senior. This gives a narrow window into which this piece could fit within the dates explored in this blog. The curators at the Yale Center for British Art give this piece an approximate date of 1790. Girtin was most active from 1790-1810. If "Rochester, Kent: From the North" dates to 1790, it is one of Girtin's earliest pieces. Rochester is an ancient city, with settlement dating to as early as the Neolithic period. Near the center of the frame, we see Rochester Castle which was originally constructed in the 12th century. To the left is Rochester Cathedral, which is even older, with construction beginning about 1080. Beside these medieval structures are the trades of the 18th century. Behind the trees between Rochester Castle and Rochester Cathedral are a pair of windwills. Down at the waterfront is the skeleton of a large vessel. 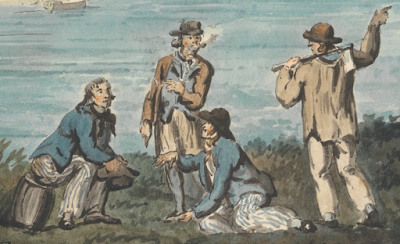 Where there are ships, there are sailors. These tars rest, smoke, and chat by the Thames. Three of them gather in a semicircle, while a fourth man (perhaps a farmer) gestures to the right. 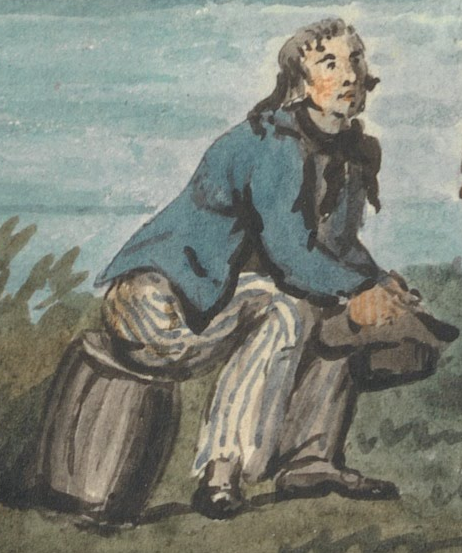 Sitting atop short gray barrel, our first jack wears a short blue jacket without cuffs. A black neckcloth fits about his neck, and his gray hair lays about should length. In his hand is a round hat with a conical crown. He also wears white trousers with narrow blue vertical stripes, gray or white stockings, and pointed toe shoes with oval buckles. 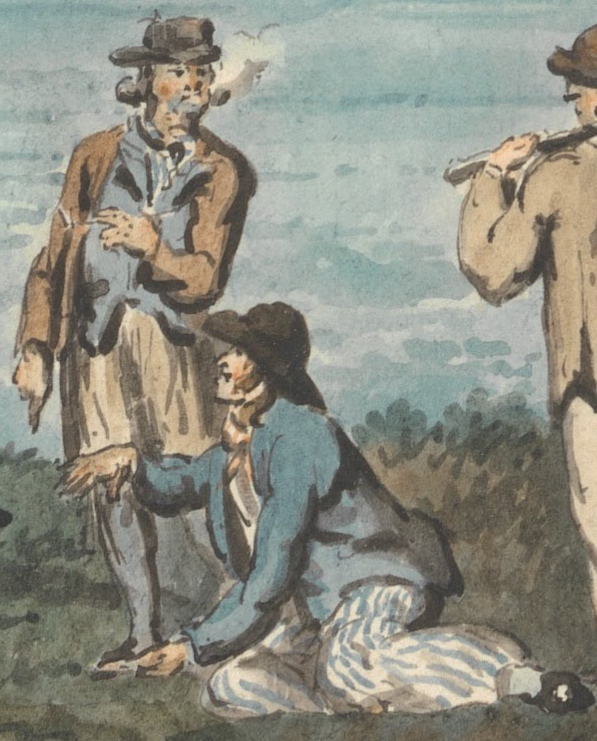 At center, a sailor stands tall with a long clay pipe between his fingers. His jacket is brown, resting over a blue waistcoat with significant cutaway. There is a black neckcloth tied against a blue and white shirt. Whether the shirt is check or striped is unclear. His black round hat is rather rumpled, but appears to have a roughly conical crown. Slops/petticoat trousers hand down to his knees, where we see blue stockings and black pointed toe shoes.

Sitting beside him and gesturing in his conversation is our third jack. He wears a wide brimmed round hat with a rounded crown. His blue jacket, striped trousers, and shoes all match those of his mate. At his neck is an orange and white striped neckcloth. 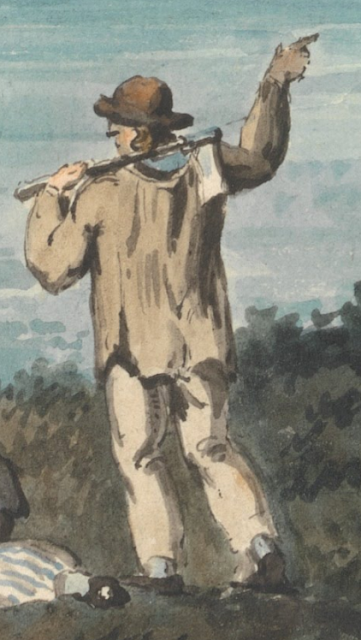 The fourth figure is a bit enigmatic. He wears a short brimmed brown round hat with a rounded crown, a blue neckcloth or shirt, a plain smock, and plain trousers. The stick over his shoulder appears to be a tool of some sort; perhaps a hoe or axe. It might be a sailor's stick, but the way he holds it is quite different from any posture I've seen sailors use. At that, he appears to be outside the conversation of the three sailors, and only just now striding up to them. It may be that he is an agricultural laborer. Or, I could be entirely wrong and he could indeed be a sailor. His clothes are not unlike those of a central figure in "Watson and the Shark."
Posted by Kyle Dalton at 6:35 AM