Shipping at Anchor in the Thames Estuary, Date Unknown 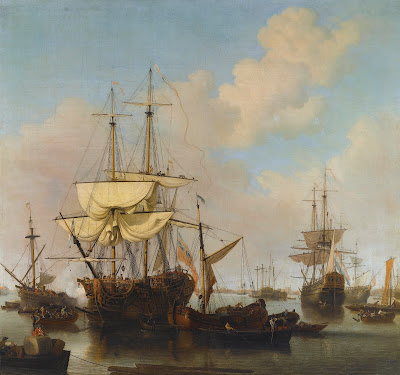 "When one goes into Wapping or Rotherhithe, which places are chiefly inhabited by sailors," wrote the author Sir John Fielding, "but that somewhat of the same language is spoken, a man would be apt to suspect himself in another country. Their manner of living, speaking, acting, dressing and behaving are so peculiar to themselves. Yet with all, they are perhaps the bravest and boldest fellows in all the world."[1]

British sailors living in and visiting Wapping were well aware of the paradoxical nature of a mariner's life. Both the revelry of a shore bound life and the constancy of death were on full display. If a seaman were to look past the gin shops and gibbeted bodies partially afloat at full tide, he would see the forest of masts and yards that Samuel Scott has so ably illustrated here. 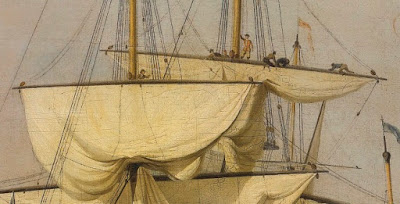 Aloft on the ship at the center of the piece are some of those "bravest and boldest fellows in all the world." They wear brown and blue jackets with white and blue trousers. On the foretopsail a sailor wears a round hat with a narrow brim, At the main topsail the sailors wear caps, with the fellow standing by the mainmast wearing a cocked hat. 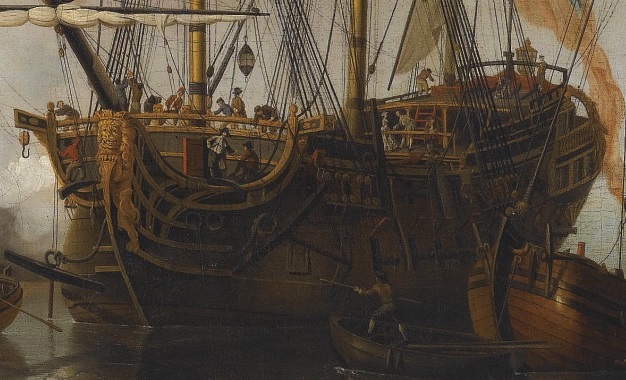 On deck are a variety of sailors wearing the full range of sailor's garments. Petticoat trousers/slops, trousers, blue, brown and red jackets, round hats, cocked hats, and caps. Standing by the wheel and ladder is a fancy man bowing to a lady in a fine dress, and interesting parallel to the labor being done by the sailors on the forecastle. 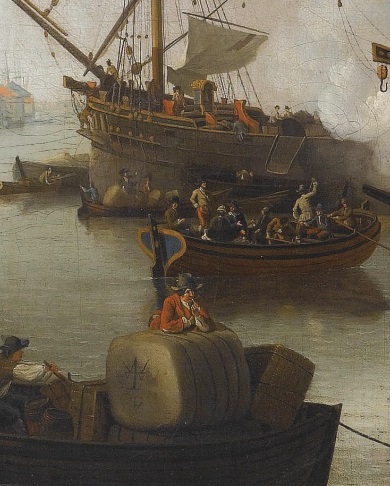 The ship's crew fires a salute to starboard, clouding the nearby brig in smoke. Rowing into that smoke is a longboat with a blue painted stern. Her coxswain and oarsmen wear jackets without waistcoats and round hats. One of the oarsmen has a pair of red breeches.

In the foreground, a sailor contents himself with his pipe while his mate pulls away on his oar. The smoking tar has a black round hat with a taller crown and narrow brim. His jacket has slash cuffs which are rolled back on his left arm, the same that supports his pipe. The oarsman appears to be wearing his sleeves rolled up as well, and is without a waistcoat. 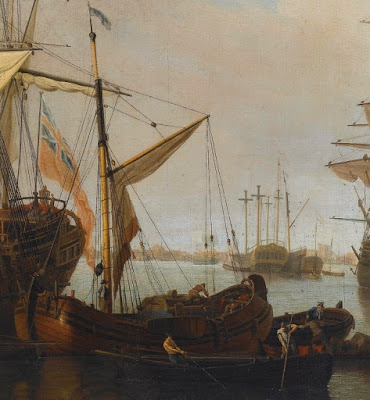 The sloop to larboard has but three sailors aboard, who appear to be largely at their leisure. The man leaning against the mast appears to be smoking, as his mate might be further aft. They wear brown and blue jackets with brown slops/petticoat trousers and black caps, with the exception of the smoking man further forward who wears a round hat. 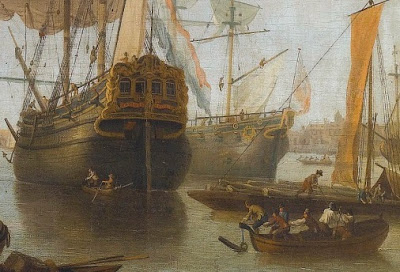 Astern of the large Dutchman is a barge of watermen moving lumber, and a boat of men hauling in an anchor. They wear yellow, red, brown, and blue jackets with caps. One fellow further forward wears a pair of brown or red breeches and a brown waistcoat with a black cocked hat.