Today's post comes to us special from Buzz Mooney. Buzz is a longtime reenactor, maritime history enthusiast, and personal friend.

Straps in Training:
Wearing Shoes "Sailor Fashion" in the Age of Sail

In Bill Sullivan’s recent article on MakingHistory.com, I found this intriguing little gem:  “Sailors wore their shoes 'sailor fashion,' swaggering around with one buckle strap flapping out of the buckle and tugged to the front; others in the backcountry and German-speaking areas turned both buckle straps outward to flap up and down like mule ears, tying them with a string—kind of like wearing your cap backwards or loose-lacing your Timberland work boots.”

I decided to see what I could find, to illustrate or verify the notion of shoes worn “sailor fashion”. Were there period sources that mentioned this, and was it shown in period illustrations? When did sailors wear their shoes in this manner, if at all? The article didn’t cite any sources, so I had to explore this notion on my own, as best I could.

I posted an inquiry on Facebook, to see if any of my naval re-enacting friends could shed some light. Fortunately for me, my list of friends includes the authors of two respected blogs on the subject of period Sailor attire; Kyle Dalton, of British Tars; 1740-1790 and Ben Bartgis of the related Napoleonic Tars; 1790-1820, as well as some of the best naval re-enacting units in the US, including HMS Acasta and Ship’s Company.

Tom Apple told me that the cordwainer at Colonial Williamsburg had told him that this practice was called “training the strap”, and both he and Steve Rayner directed me to Bennett Cuthbertson’s A System for the Complete Interior Management and Oeconomy of a Battalion of Infantry... (London, 1768:135)


"XVI. It should be particularly observed, that the Men do not wear their Shoes, on the same feet, but that they change them day about, to prevent their running crooked; nor should they be permitted to have their Shoe straps pulled toward the toe, like Sailors: but are to be accustomed to tuck the ends of them, under the rim of the buckle.”

So here was a direct, period reference to the style, with a description that told me what to look for. The next step was to see what illustrations I could find, to show this “in action”, and, I hoped, to give me an idea whether this was a brief fad, or a long-running fashion. My particular hope was to show whether it ran throughout the periods cited in Dalton and Bartgis’s blogs, which cover the range of periods I re-enact, as a Sailor. I was pleased to find that artists of the period often showed some variation of “training.”

The Cuthbertson book told me the style was commonly recognized as a sailors’ fashion in 1768, which suggests that it had been common for some years, so that at least gave me a fairly early confirmation, and the images I found showed that the style continued into the 19th century.

Before showing the illustrations, and photos of my own shoe “trained”, I’ll give the terminology I’ll be using, with the assistance of an illustration from American Duchess’s website, showing the parts of a shoe buckle. The buckled shoe of the eighteenth and early nineteenth century has the same sort of tongue, common today, and requires no elaboration, but the straps which buckle across the instep of the foot are no longer common. For the purpose of this article, I’ll call the strap by which the buckle is usually attached, the “chape strap”, and the strap which is then buckled to secure the shoe on the foot, as the “tongue strap”. This illustration of a buckle may help to make it clear why I use these terms: 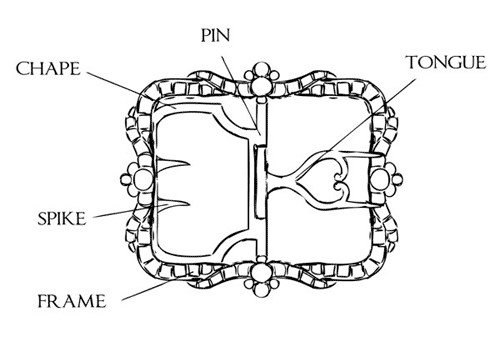 Normally, the chape strap would be passed under the frame, but over the chape, and then passed down through the chape, (to the left of the center bar) and either folded back and tucked under, or laid against the foot, under the tongue strap. The tongue strap is then passed upward through the frame, (to the right of the center bar) and is drawn snug, with the forked tongue of the buckle passed through holes in the chape strap. In the “trained” fashion, some illustrations seem to show the tongue chape simply allowed to hang loose, without being tucked under the left end of the frame, but others  seem to show both straps drawn forward, with the tongue strap either loose, above the frame, or passed through under it, and drawn forward. Other illustrations seem to suggest, however, that the buckle may be installed in an unusual fashion, with the tongue strap buckled first, then the chape strap passed upward through both chape and frame. Ben Bartgis suggested the possibility that training might serve to speed up the process of putting on the shoes, and this method seems to me to be particularly suited for that.

Before showing my experiments with my own shoe, I’ll show the illustrations which I felt showed both the variety of approaches, and the duration of the fashion, as I’ve been able to trace it, thus far.

I’ll start with John Singleton Copley’s evocative "Watson and the Shark" (1778). There is only one shoe visible, but it’s painted with fine detail. Here’s the close-up: 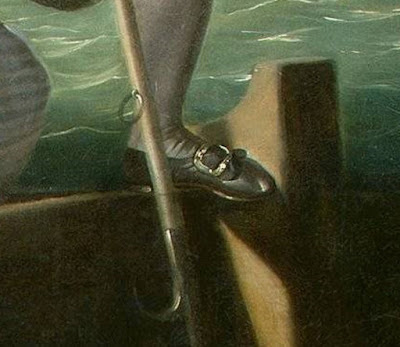 It appears both straps are trained forward, with both passed under the frame. I’ve found this to be a somewhat challenging style to mimic, but also the one most likely to keep the shoe securely buckled to the foot. 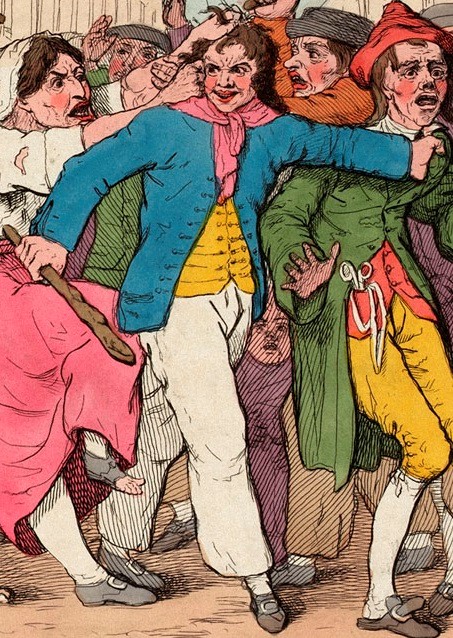 In this detail from Gillray’s "The Liberty of the Subject" (National Maritime Museum, 1779), we see a sailor with one strap (presumably the tongue strap , as I find it’s easier to buckle the shoes with the tongue strap to the outside) trained forward under the frame. Note that the Tailor being pressed into naval service has a loose strap, which may be in imitation, or may simply be because he’s being roughly handled.

In Carrington Bowles’ “The True British Tar” (1785) we see a single strap hanging loose, not passed under the frame. It appears his left shoe may be styled in the same manner, but this isn’t clearly depicted. Here’s the detail: 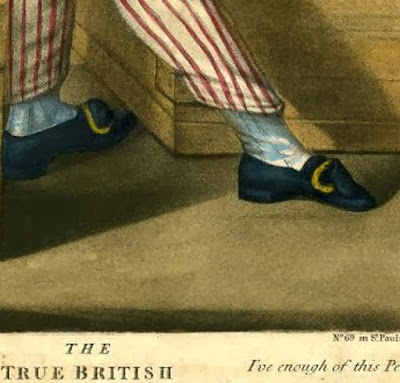 Next, we have “Poor Jack”, By Bowles and Carver (1790). In this case, we see both shoes, with one loose strap, drawn over the frame. 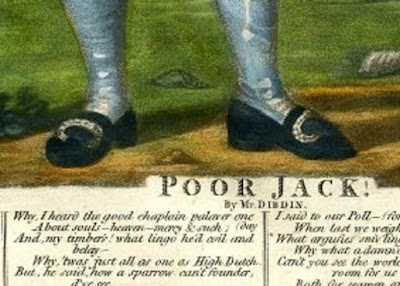 The conclusion, Part Three, can be found here.
Posted by Kyle Dalton at 7:00 AM