Buckingham on the stocks at Deptford, 1752 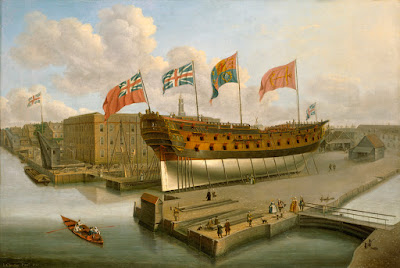 Buckingham on the stocks at Deptford, John Cleveley the Elder, 1752, National Maritime Museum.

Cleveley was a shipwright by trade, and many of his paintings depict ships on the stocks. He also populates his paintings with sailors and people. Unlike many other marine artists of the time, Cleveley never separated the image of the ship from the people who built and sailed them. A tangible reminder of the importance of the sailors and the tradesmen in creating these beautiful machines.

Astern of the landlocked Deptford is a small barge with two bargemen. They lay on their oars, but have built up enough moments for a very slight wake to follow their rudder. 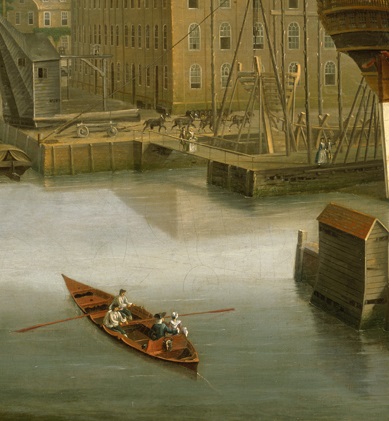 They are clad in shirtsleeves, white stockings, blue breeches, and black jockey style barge caps.
Posted by Kyle Dalton at 7:00 AM