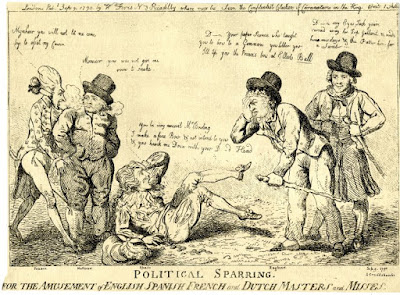 Cruikshank's political cartoon deals with a diplomatic spat in 1790 following the arrest of Captain Colnett by the Spanish. As described by the British Museum:


A satire on the affair of Nootka Sound...England had appealed to her ally the United Provinces, who (with Prussia) had admitted that Spain was the aggressor and had promised support. Spain had retaliated with an appeal to France under the Family Compact.

Cruikshank continues the political cartoon tradition of depicting Britain as a sailor: manful, strong, and violent. In this case, the sailor is referred to as "Mr. Bowling." After the success of Tobias Smollet's 1748 novel The Adventures of Roderick Random, the name Jack Tar was joined by Tom Bowling as a shorthand for British sailors. 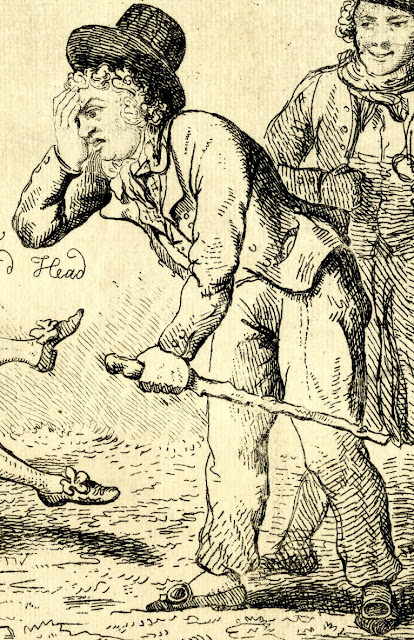 Bowling clutches his forehead from where the Spaniard gave him a smack, but given the prostrate position of Spain, it looks as though Britain gave far more than he got.

The curators at the British Museum state ''Elliot's Ball' is probably an allusion to the siege of Gibraltar,' from the American Revolutionary War, 'and possibly also to Hugh Elliot's mission to Paris to dissuade the French democrats from adhering to the Family Compact.'

Bowling wears a round hat with upturned narrow brim and tall cylindrical crown. Around his neck he wears a plain neckcloth, tucked into a single breasted waistcoat. His jacket ends just below the waist, with slit pockets. Bowling's mariners cuffs are buttoned closed and loose plain trousers run down to the ankle, where he wears pointed toe shoes with round buckles. In his left hand is a stick.

His shipmate looks on with approval, saying:


D-n my Eyes Jack, you've carried away his Top Gallant & made him mis stays & the Patter him for a Swab.

The sentence is a mishmash of nautical terms being used in a way that doesn't make a lot of sense, but is mean to mimic the common speech of sailors that, to the average Briton, was just as nonsensical as this.

Our sailors wears a round hat with a tall rounded crown and short upturned brim over what may be a bob wig. His plain neckcloth is wrapped around his neck like a scarf, draped over the collar of his single breasted jacket with its buttoned mariners cuffs. A single breasted waistcoat is short with a very narrow cutaway at the bottom, hanging over his petticoat trousers. As with Jack Bowling, this sailor carries a stick.