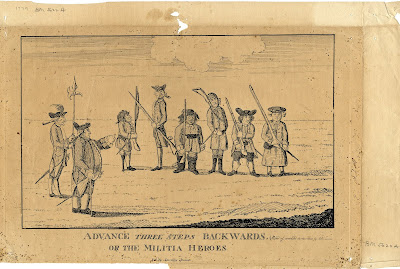 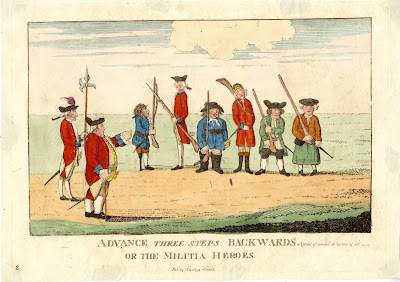 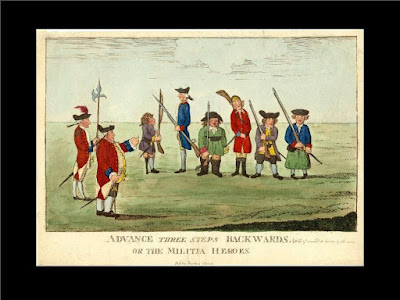 Thanks to follower Phil Hosea for bringing my attention to this print. I was unable to find the source of the third image here, so if you happen to know where it is from, please let me know!

The rebellion in the American colonies was draining the British. With the entry of the French and Spanish in 1778, the war expanded across the globe and strained the Crown's resources. Threats of invasion of Britain saw a renewed emphasis on militia companies, but it appears that the printer Matthew Darly didn't think much of them.

In this cartoon, Darly skewers the ragtag companies of British militia as inept. Muskets are angled all over the place, and the men of the company are of all sorts of sizes and shapes. The fellow on the far right is a sailor. 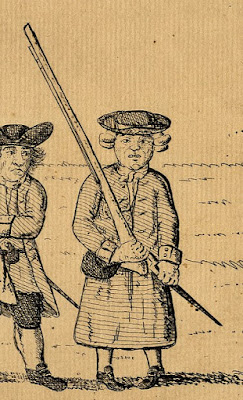 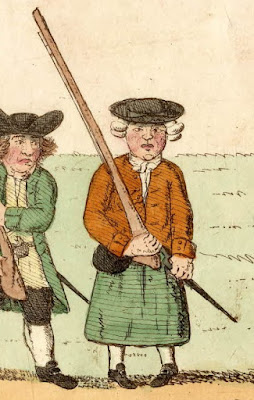 He wears a round hat with an upturned brim over a bob wig. A white neckcloth is tucked into his single breasted jacket, which is orange/brown in one coloration, and blue with red cuffs in the others. His petticoat trousers are green in both colored prints, which I don't think I've ever seen before. Perhaps it was the same colorist for both copies, but it is the only consistent coloring aside from the red uniform coats with blue facings that the soldiers in the image wear.
Posted by Kyle Dalton at 10:00 AM