Thomas Rowlandson took a tour from his studio in London to the wreck of the Royal George in 1782. He completed an album of twenty-seven images documenting his vacation. Two of these images portray the Hector, a 74 gun man of war. Rowlandson's depiction of the gun deck of a third rate as she sits idle in port is telling. The Hector has taken on the appearance of a rounded community, almost like a village ashore. Unlike the almost universally male society of a warship at sea, there are women scattered throughout the scene. In this scene we see a telltale sign of domesticity in the terrestrial mode: pet dogs. 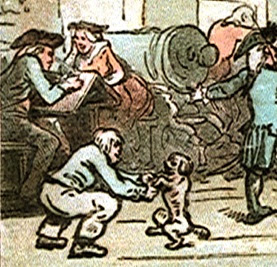 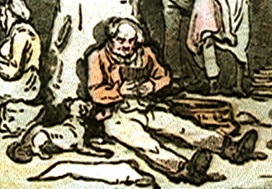 In his The Wooden World: An Anatomy of the Georgian Navy, N.A.M. Rodger states it very clearly: 'Every ship had animals of many kinds aboard.' Most common were the pests like rats, followed by livestock, and finally pets.[1] For the sake of this post, I'm defining pets as animals that provided companionship, and were not intended to be eaten.

Sailors, like their brothers ashore, kept pets. Dogs were certainly among them. During the 2005-2006 excavation of the sloop Swift, a Royal Navy vessel that went down off Argentina in 1770, archaeologists recovered an intact metal dog collar.[2]
Dogs were common enough be included in (arguably) high art. William Hogarth's painting depicting Lord George Graham in the cabin of his 24 gun Bridgewater includes two dogs: Graham's spaniel and Hogarth's pug named Trump. 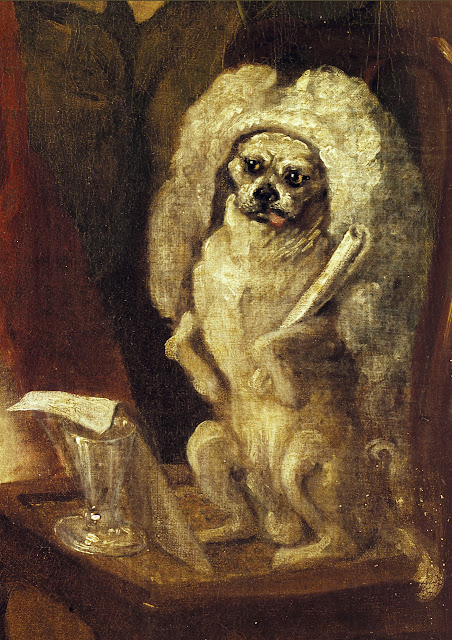 As well as being companions, dogs could also serve diplomatic purposes. When Jacob Nagle accompanied a colonizing expedition to Norfolk island in 1790, both the Europeans and Pacific Islanders exchanged gifts of dogs:


They brought two small dogs as a great present, but so vicious that they had to gag them, which was excepted of, through friendship, and in return the Dutch capt gave them a hound slut, which they seemed to adore. They tied a string round hur neck and danced round hur with great joy and led hur up to the town.[4]

Dogs could also intimidate. When the cooper John Nicol was having trouble getting work done while surrounded by Hawaiians, 'the captain, seeing from the deck my disagreeable situation, hailed me to set Neptune, our great Newfoundland dog, upon them, saying he would fear them more than fifty men.'[5]

If things got difficult, dogs could also become a food supply. In his entry for February 8, 1774, gunner's mate John Marra of Captain Cook's Resolution was matter of fact about it: 'Ships head N. by W. This day roasted the lieutenant's dog for the gun-room.'[6]

Sailors harbored an incredible affection for cats. When the American sailor Ashley Bowen took ill in 1746 as a prisoner in Hispanola, he found 'my cat was the greatest means of my recovery of my health.'[7] Henry Fielding was shocked at just how deep mariners' care for cats was during a voyage to Portugal in 1754:


While the ship was under sail, but making as will appear no great way, a kitten, one of four of the feline inhabitants of the cabin, fell from the window into the water: an alarm was immediately given to the captain, who was then upon deck, and received it with the utmost concern and many bitter oaths. He immediately gave orders to the steersman in favor of the poor thing, as he called it; the sails were instantly slackened, and all hands, as the phrase is, employed to recover the poor animal.

The cat was eventually saved by the boatswain, who stripped and swam to the stricken creature, carrying it back aboard in his mouth. Fielding wrote in his journal that some sailors were disappointed at the survival of the kitten, as 'the drowning of a cat was the very surest way of raising a favourable wind.'[8] As much as sailors' superstitions are overplayed, the belief that cats were somehow connected to the winds appears to be genuine. Samuel Kelly remembered just such a case in 1788:

Having got the pilot on board at Deal and some fresh provisions, we sailed for the river. Our pilot, seeing our cat frolicsome, who doubtless smell the land, and was running in and out on the bowsprit, became exasperated against the poor animal; he being superstitious concluded her gambols denoted a heavy gale of wind, which actually came on and we rode out the storm in Margate Roads, but I do not think the manoeuvres of the cat were in any way connected with it.[9]

Kelly appears to be wrong. Cats may indeed react to changing barometric pressure. Obviously, cats do not affect the weather, but they are affected by it. No less a literary figure than Johnathan Swift commented on this phenomenon when he published his 1710 poem 'A Description of a City Shower' in The Tatler:


Careful observers may foretell the hour
(By sure prognostics) when to dread a shower:
While rain depends, the pensive cat gives o'er
Her frolics, and pursues her tail no more.[10]

There is a key difference between the belief that Kelly's pilot held in cats predicting the weather, and Fielding's crew who believed that cats controlled the weather.

Christopher Hawkins many decades later related a fanciful and probably apocryphal tale of an unnamed British frigate captain during the Revolution that held a 'natural antipathy' to the ship's cat. While around it he was 'uneasy.' Either this captain was no lover of felines, or held to the belief around cats' control of the wind. In any event, Hawkins wrote that a sailor had been condemned to flogging by the cat-of-nine-tails, but escaped punishment by presenting the captain with this ditty: 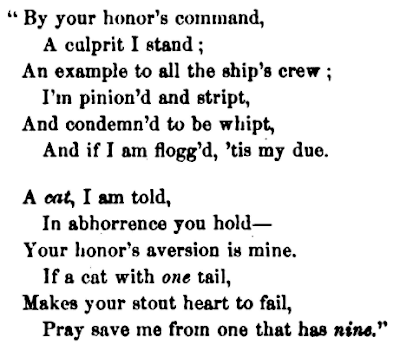 [11]
Exotic pets were also sometimes acquired, especially by sailors in tropical climes. Peter Earle, in his book Sailors: English Merchant Seamen 1650-1775 found that a sailor named 'Thomas Marshall excused his desertion in St Kitts in 1738 by claiming he had only gone ashore to search for his parrot, while the British consul in Lisbon related in 1724 that some wreckage was known to be from a ship from Brazil because of the parrots and monkeys washing ashore.'[12] When sailing from Florida in 1785, Samuel Kelly served on a vessel that was a positive menagerie. He slept near 'two small white face monkeys' named Jacko and Caesar. Among his passengers 'The Colonel had also a racoon on board and each of the young ladies had a lap dog.'[13]