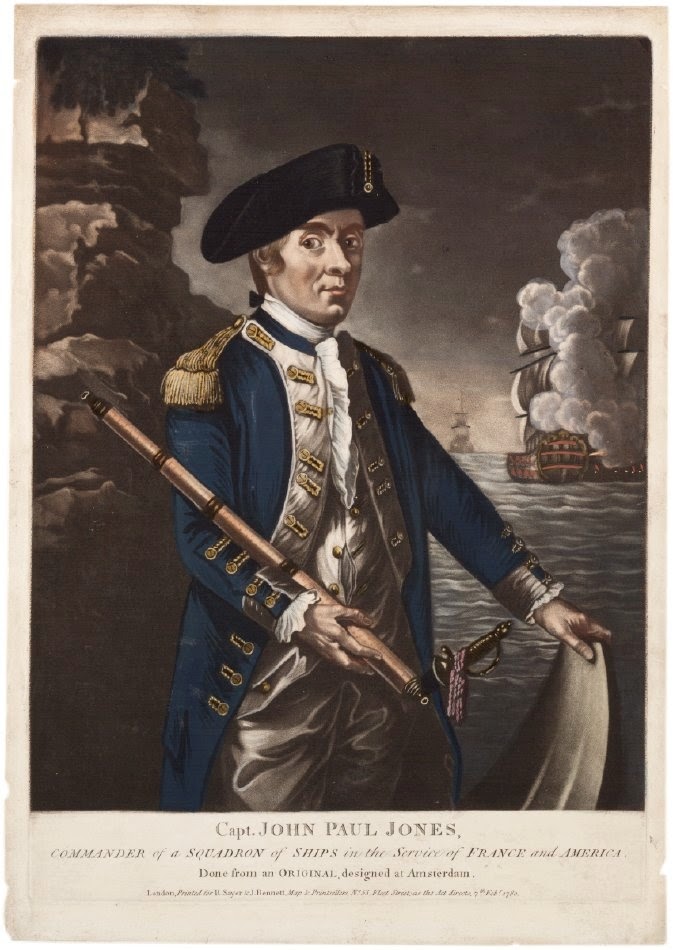 "Capt. John Paul Jones, Commander of a Squadron of Ships in the Service of France and America," printed by Sayer and Bennett, 1780, Gilder Lehrman Institute of American History.

Easily the most famous of all Continental Navy officers in the American Revolutionary War, John Paul Jones is the subject of many books (both fictional and true) and one surprisingly boring movie. His exploits are the stuff of legend, but the most famous of his victories is that of his Bonhomme Richard over the British 44 gun Serapis. With his ship almost literally sinking beneath him, Jones pounded the Serapis into submission. The famous Battle of Flamborough Head (along with the possibly mythical line "I have no yet begun to fight") have resounded through the centuries. It is presumably this battle that is depicted in the background of Jones' portrait.

Interestingly, this print was made during the war with America, and printed by Sayer and Bennett: two very successful printers in London. One has to wonder what their audience thought of the dashing figure that had confounded their Royal Navy in home waters.

Aside from Jones' skills as a mariner and courage as a fighter, it can be also said that he was a clothes horse. This uniform does not conform to Continental Navy regulations. On September 5, 1776, the Marine Committee declared that officers should wear blue breeches, a blue coat with red facings, with a red waistcoat.

In February of the following year, Jones and other captains offered an alternative uniform of white small clothes and a blue coat with white facings. This recommendation was adopted by committee, but not by Congress.

Jones went on wearing his own uniform anyway, among several other styles. 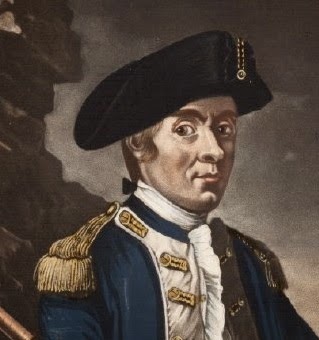 In this portrait (supposedly taken from an original painted in Amsterdam), Jones wears a black cocked hat with a large cockade bound in gold and held by a gold button. His large epaulets are also gold, matching the lace around doubled gold buttons that run down his white lapels. The buttons are each engraved with an anchor. A large white cravat peeks from between his lapels, contrasting the small black bow around his queue. 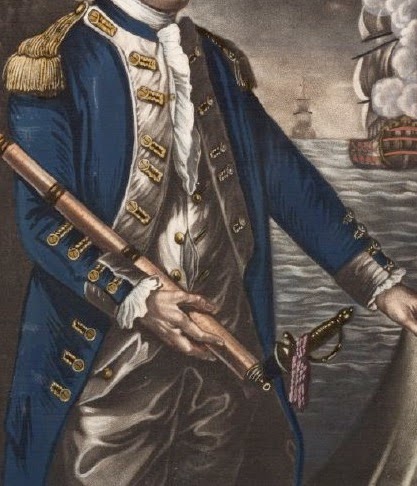 Jones' short lapels end just above the natural waist, but the buttons and lace continue below there. A long, blue scalloped cuff runs from just below the elbow to the frilled cuffs of his shirtsleeves, running over the white cuffs of his coat. Along the scalloped cuff are four buttons with lace. His small clothes appear to be white silk (judging by the shading), and are fit with smaller gold buttons which appear to be plain domed.
Posted by Kyle Dalton at 8:00 AM