Consider this a postscript to Press Gang Week. I reached out to Dr. Land after the week had already started. Below is his response.

Dr. Isaac Land is an Associate Professor of History at Indiana State University. He received his PhD from University of Michigan Ann-Arbor in 1999 and is the author of War, Nationalism, and the British Sailor. 1750-1850. Among Dr. Land's recent projects is the Coastal History Blog, part of the Port Towns & Urban Cultures website. One of his specialties is the state of historical scholarship and debate surrounding press gangs.

I showed Dr. Land seven primary source images depicting press gangs at work, and asked him to choose the one that best captured the nature of press gangs in the eighteenth century.


I don’t think that any of these artists was trying to give us a sense of what a typical, real press gang looked like in action (a lot of impressment took place at sea, for example), though maybe the rough-and-tumble choreography and sheer physical comedy of most of your images does capture what impressment looked and felt like in a crowded port town.  The presence of concerned women in so many of the images does underscore the fact that women really did resent the practice, as it deprived them of breadwinners, and were not shy about obstructing or even fighting the gangs. 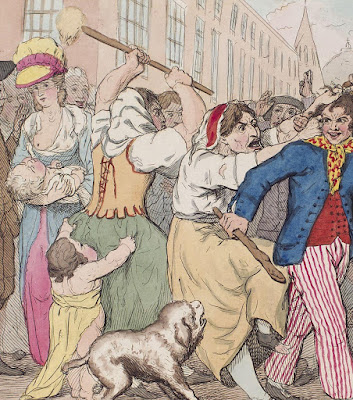 Mary Wollstonecraft remarked that impressment was a women’s issue.  Still, these images are better considered as political cartoons than as slices of life, and the pointed, sometimes abstract titles (“Liberty of the Subject”) reinforce this. 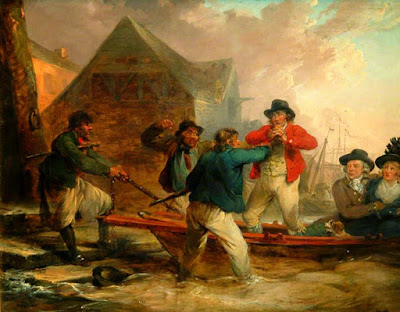 I’ll offer a contrarian choice and select the George Morland image. Morland is undergoing something of a revival or critical reappraisal at the moment, with a major exhibition in Leeds this year and a new edited volume coming out about his work. Morland’s pious sailor, with his hands clasped in prayer and his large, emotion-laden eyes turned skyward, is presented as a lamb-like victim.  As an artist, Morland is drawing on the long tradition of martyrdom portraits in Christian religious art.  (Most of your other images derive more or less directly from William Hogarth’s sly and coarse physiognomies that in turn owed much to the Dutch genre of moralizing “low life” paintings.)

Morland is also well known for his depiction of the Atlantic slave trade, actually a quieter composition but also one in which the dignity and integrity of the victim—in this case a shirtless, classically proportioned African male—is contrasted with the turmoil and injustice around him.  We can certainly quibble about the merits of the impressment – slave trade comparison, but it is a connection that many contemporaries made.  It is helpful to remember that for Voltaire, Benjamin Franklin, and quite a few ordinary people, impressment was seen as an affront to universal values, or as the naval surgeon Thomas Trotter put it in the 1790s, a violation of “civil liberties.”

Be sure to visit the Coastal History Blog to keep following the work of Dr. Isaac Land!
Posted by Kyle Dalton at 7:30 AM