Wikimedia Commons also hosts a high quality version of the National Portrait Gallery print. Due to a copyright claim on the part of the NPG against Wikimedia, I will not be hosting their copy of that version.

In this very entertaining cartoon, a group of British women try to fight off a press gang. Their victim, a hapless tailor with tape and scissors in his waistcoat pocket, is shuffled away while the gang trades blows with the women. There's a number of sailors in the gang, but we only get a good view of the two dragging away the sailor.

Gillray's print is the same in each of the above collections. What is interesting is the variation in color. Colorists were not beholden to the artist's original intentions, and projected their own expectations on the prints. Some were lazy (only the colorist on the National Portrait Gallery's
copy bothered to paint the hand grasping the poor tailor's left arm), but all of them brought their preconceived notions to the table. While there are certainly variations in the three prints, the similarities are notable. 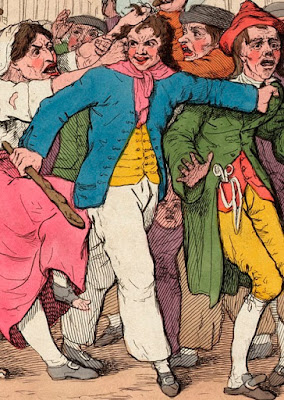 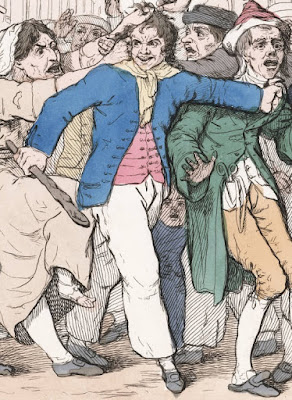 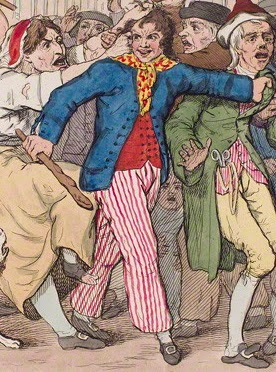 The sailor on the left has lost his hat in the fray, and despite having his short hair pulled by one of the women in the crowd, seems to be enjoying himself. His neckcloth is variously depicted as yellow with red dots, salmon colored, or pale yellow. In every iteration, his double breasted jacket is blue with cloth covered buttons both on the lapels and the short slit cuffs. The waistcoat is triple breasted with cloth covered buttons, fashioned with a short cut off, and hangs down to the waist. The National Maritime Museum's copy shows his waistcoat as yellow, but the other two are red. His loose trousers are long, all the way to the ankles, and plain, except in the National Portrait Gallery's copy, where they are decorated with narrow vertical red stripes. 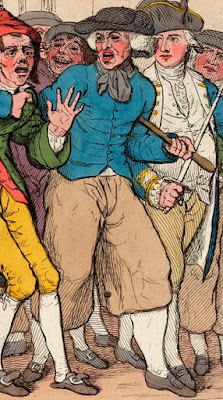 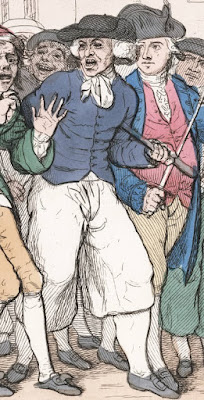 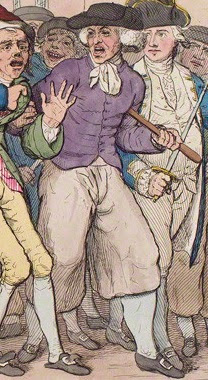 His mate to the right looks considerably more alarmed. He wears a black round hat turned up on the right side. His white hair or wig is in a bob style. The neckcloth projecting from his jacket or sleeved waistcoat is white, except in the NPG copy where it is black, and is tied in a very interesting knot that I can't quite place. His single breasted jacket is a light purple, a dark bluish purple, and blue with cloth covered buttons. His slops/petticoat trousers range in hue from white to brown. In every copy his stockings are white.

Both sailors wear shoes with gradual pointed toes and rectangular white metal buckles with rounded corners.
Posted by Kyle Dalton at 7:30 AM