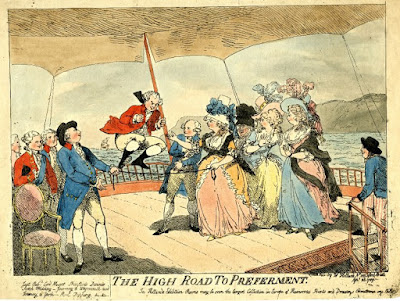 The Prince of Wales and his notorious cohort of rich gentlemen and ladies, are depicted having a lark on the poop of (presumably) a royal yacht. It is the Prince's rowdy friends that are the focus of this piece. Rather than earning their place in society and government through effort or merit, "The High Road" is how humorous they prove themselves.

While the artist is apparently disgusted at the frivolous nature of the Prince's court, the sailor on this yacht is rather entertained by the spectacle.

The jack wears a black round hat with a somewhat wider brim that appears to sag a bit on the sides. Its crown is cylindrical. Wrapped around his neck is a white neckcloth, which is draped over his blue jacket that ends below his waist and sports open mariner's cuffs with cloth covered buttons. Finally, he wears a pair of long trousers with broad vertical red stripes.
Posted by Kyle Dalton at 8:00 AM