"A view of Endeavour River, on the coast of New Holland, where the ship was laid on shore, in order to repair the damage which she received on the rock," engraved by William Byrne after Sydney Parkinson, 1773, National Maritime Museum.

It has been some time since we last visited Captain Cook!

This scene finds the Endeavour intentionally grounded in Queensland at the mouth of what they have named the Endeavour River. Cook's ship struck the four mile long Endeavour Reef, suffering damage that required serious repairs. For seven weeks Cook and his crew would patch up the vessel while the scientists scoured the surrounding area to collect and study flora and fauna. Cook also made an effort to reach out to the local Guugu Yimithirr people. 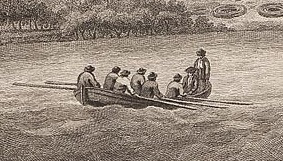 To the south of the beached Endeavour is a boat full of oarsmen who row easy. The oarsmen themselves wear round hats with narrow brims and short jackets. In the stern is an officer, possibly Cook, and a standing coxswain. The cox wears a round hat and jacket as well, and though he is standing there is too little details to say more about his slop clothes.
Posted by Kyle Dalton at 7:00 AM