A view of the Endeavour's watering place in the Bay of Good Success, 1769 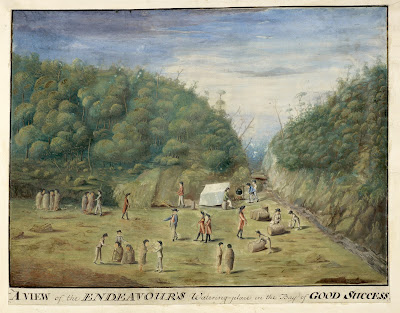 "A view of the Endeavour's watering place in the Bay of Good Success, Tierra del Furgo, with natives. January 1769," Alexander Buchan, 1769, British Library via Wikimedia Commons.

Thanks to Gregory Scott, Steve Rayner, and Adam Hodges-LeClaire for digging up this wonderful piece.

Again I return to Captain Cook's voyages. and we find him at the very bottom of the New World. Good Success Bay, here styled as "the Bay of Good Success," was a place of respite for the crew. They had weathered a storm the night before, and lost a kedge anchor in the process. The Endeavour's log for that day, January 20, 1769, reads "at 2 a.m. sent the People on shore to Wood and Water and cut Brooms, all of which we Completed this day." In this watercolor, we see "the People' at work, but also enjoying themselves. A few sailors converse with the local native people, while marines meander about. 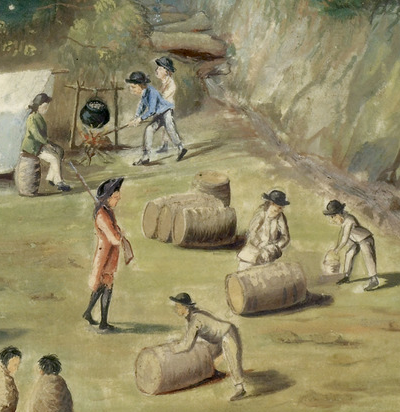 This wonderful detail shows some of the men about a campfire cooking a meal, while others use buckets to fill water casks from the nearby stream. A marine (strangely dressed in red small clothes and a red coat with no apparent facings) stands nearby with his musket.

The sailors are all dressed in a fairly similar fashion: black round hats with upturned short brims, short jackets ending below the waist, and plain trousers ending above the ankle. The jackets are variously white, blue, and green. 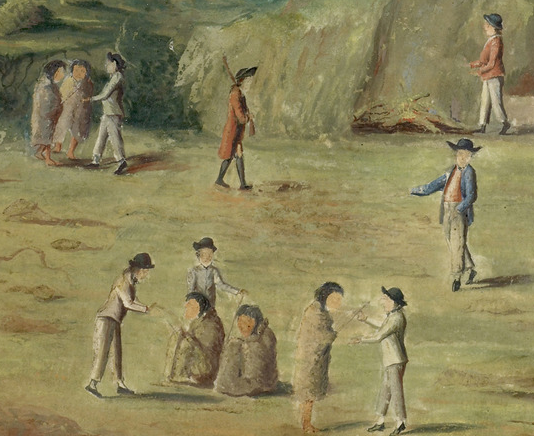 This detail show much the same slop clothes as the last, with the same style of hats, jackets, and trousers. There are two new details worth mentioning.

This dapper looking sailor has a hand that appears to be in the pocket. I hesitate to say this is positive, as the details on this resolution are not strong enough and I have yet to see a sailor's trousers with pockets placed so similar to modern jeans. Generally, the pockets of a sailor's trousers are in a straight line down the side of the leg.  He is also the only sailor who gives us a clear view of the white lining of his jacket as well as the loose upper corner lapels. He also wears a red waistcoat tucked into his trousers. 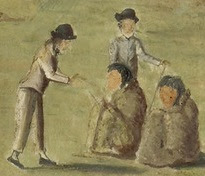 These sailors are largely unremarkable, except that the tar behind the two seated native people is holding a walking stick. Even on such a distant foreign station, sailors are joined by that symbol of their profession.
Posted by Kyle Dalton at 9:04 AM