The Life and Surprizing Adventures of James Wyatt (Part 1), 1753 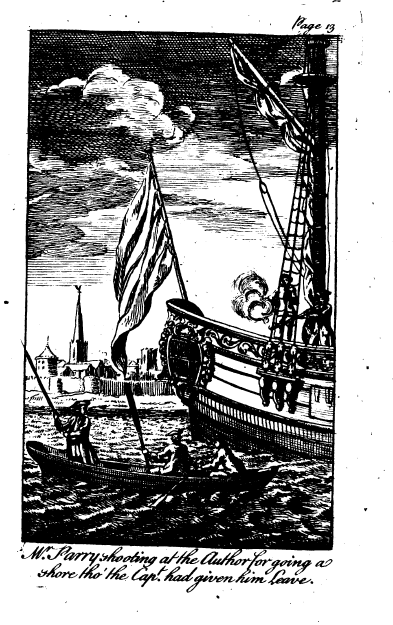 Recommended long ago by follower Justin Jolly, I have finally gotten around to the copperplate engravings contained in the 1753 memoirs of James Wyatt.

A common sailor with an uncommon career, James Wyatt served as a privateer aboard the Revenge in the opening months of the War of Austrian Succession and (if this colorful account is to be believed) was captured by the Spanish, narrowly saved from execution, escaped, captured by the Barbary Pirates, and eventually rescued.

Wyatt had been enlisted as the privateer's trumpeter and, through some unnamed dispute, came to be challenged to a duel by the Master at Arms. James Parry, a fellow musician and author of a memoir entitled The True Anti-Pamela, demanded they fight with small swords, but none were to be had, and so the duel was called off. Hours later, despite receiving permission from the captain to go ashore, Parry declared Wyatt a deserter and ordered the sentry to shoot him. When the sentry hesitated, Parry took the weapon and fired at Wyatt himself.

Wyatt is oddly okay with the attempted murder, stating that Parry was drunk and unaware of what he was doing. Even so, the story finds its place as a copperplate engraving in Wyatt's memoirs. 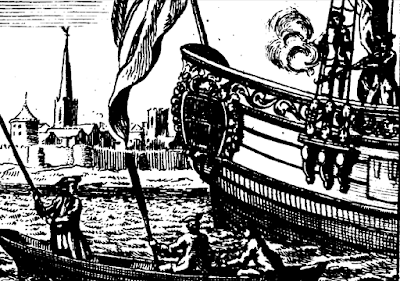 In this engraving, three men are shown in the boat. Two hold oars and presumably were the bargemen ordered by the captain to bring Wyatt ashore. They wear long jackets with cocked hats and at least one has a long waistcoat. Their hair is in the bob wig style. It is difficult to say what the figure in the stern is wearing, aside from a rather nondescript jacket. Mr. Parry wears a frock coat and cocked hat, and just astern of him is a sailor in the rigging with a cocked hat, single breasted short jacket, and trousers.