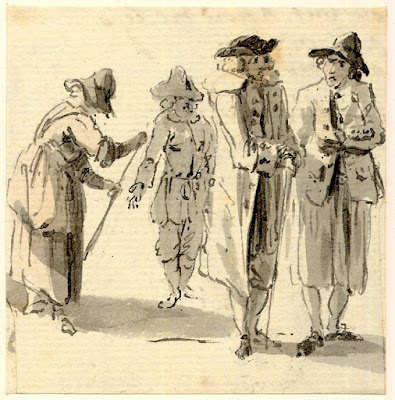 Thanks to Adam Hodges-LeClaire for pointing out this piece to me.

This drawing is one of a series done by Sandby in and around Edinburgh in the immediate wake of the Jacobite rising of 1745. Sandby's study shows a few people walking bout two, and a woman with what appears to be a broom. The British Museum's catalog states that she is a beggar woman, but I confess I'm not entirely sure why.

In the foreground, a man with a bob wig and cocked hat with short brim (possibly a sea captain) converses with a common sailor who walks beside.

Our sailor wears a hat or cap with a broad brim. At first I thought this must be a wide brimmed round hat, but Adam argues that it may be a Peter the Great cap, or a high crowned knit cap that was mean to appear like a felt hat. Obviously, a sketch is not enough to tell us whether this is a knit or felt. Atop his head and beneath the cap or hat is a bob wig.  a jacket with scalloped mariners' cuffs buttoned closed, and a pair of flap pockets at the waist. His petticoat trousers run down to just below the knee, so we can see his white stockings and pointed toe shoes.
Posted by Kyle Dalton at 9:15 AM