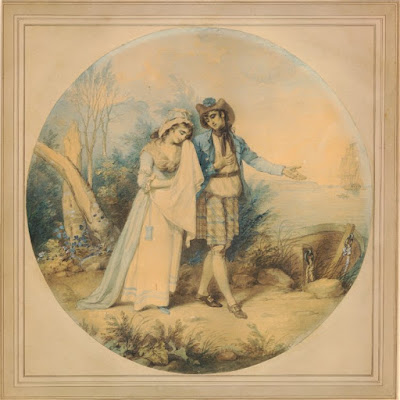 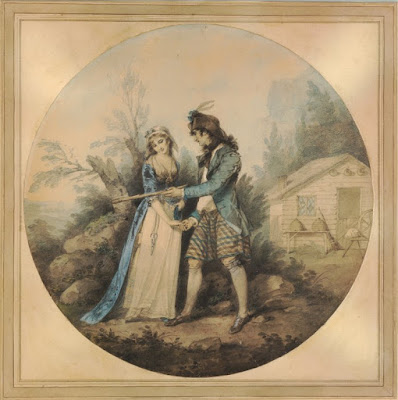 These illustrations were meant to accompany the ballad 'Auld Robin Gray,' which was originally published in 1772. The artist, John Hodges Benwell, died in 1785 at the age of 21. Benwell was first recognized as an unusually gifted artist at 16, so that restricts the dates during which these drawings could have been made to 1781-1785.


Scots are rarely addressed on this blog. This is largely because a glance at a common sailor will tell you little or nothing about their regional identity. Sailor's slop clothes served to merge them into a transatlantic (and, indeed, worldwide) clique. Clothing blurred the boundaries within the British Empire, and made all of its wearers Jack Tar.

This is also true of commanders. Even when it is Scottishness itself that an artist objects to, a sea captain like James Lowry will still look more like a sea captain than a highlander.

Figures of less renown (or notoriety) are also portrayed as indistinguishable from their fellow seafarers.


Mara Riley, of The Appin Regiment reenactment organization, pointed me to this runaway advertisement found by Dan Rosenburg. Three runaway highland sailors are mentioned as running away 'from on Board the Ship Donald...in their own Country Garb.'

Over at the blog Fishy Fashion and Maritime Modes, Adam Hodges-LeClaire mentions the occasional appearance of Scotch bonnets, a finding echoed by Matthew Brenckle. Adam dug up this piece from the early nineteenth century, in which a sailor's dress is a more subtle mix of highland style and sailor's slops.
Benwell is not the first to portray Jemmy in the Sailor's Farewell and Sailor's Return from Auld Robin Gray. The printer Robert Sayer twice portrayed Jemmy, but in neither did he include even a hint to Jemmy's Scottish heritage. 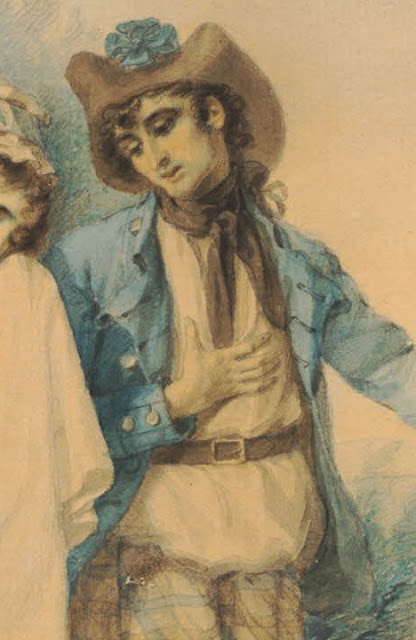 In the Farewell, Jemmy is portrayed wearing a floppy cocked hat with a blue bow. His jacket is a double breasted pale blue with white metal buttons. A black neckcloth is bound tightly, draping over his white shirt and an oddly placed brown leather belt is buckled around his waist. Jemmy sports sideburns and a queue bound in a black bow. 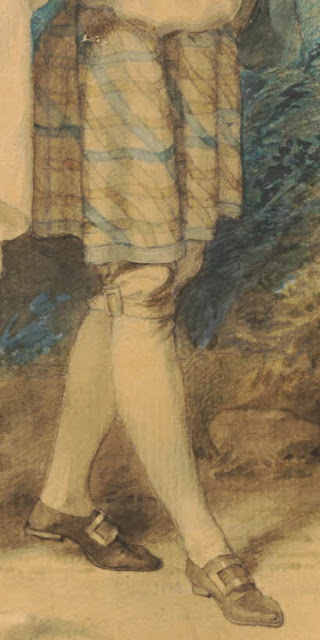 At first, I thought Jemmy was wearing a small kilt (called a fèileadh beag), which hangs down to just above the knee. Bill Johnson, more knowledgeable than I in highland dress, offered this observation:


A closer examination of the backside of the garment suggests Jemmy is in fact wearing slop or petticoat trousers, possibly made of tartan.  There does not appear to be any pleats (hand-thrown or stitched in).  Early small kilts were usually made from 3-4 yards of single-width fabric, with the pleats roughly hand-thrown as it was put on; with a light stitching to hold them in place (usually in a box pleat); or with a drawstring to bring them together.  It is not a garment easily donned in the crowded confines of a ship.

This different cut and lack of fabric suggests that these are plaid petticoat trousers. Bill continues:


Two early 18th century portraits of the Laird of Grant's piper (1714) and Champion (1715) show a colored tape being worn around the border of their respective kilts.  A tapestry on the Isle of Mull show the same type of trim, again being worn by the chief's retainers.  My question on the Benwell paintings is whether this was meant to be trimming, or an easy way for the artist to finish off the hem.

The presence of breeches is exceptional. In the eighteenth century, kilts were never worn over breeches. What were worn over breeches, as we've seen time and time again in this blog, were petticoat trousers. This is where we run into a problem with these drawings. As follower Phil Hosea points out: petticoat trousers are intended to be cheap, easily replaced, and protect the breeches beneath. None of these apply to kilts.

My best guess is that this is a nod to the combination of highland dress and slop clothes. The breeches are worn underneath the kilt-like-petticoat-trousers, and the two garments share a passing similarity in the way they are worn.

Was Benwell basing Jemmy on Scottish sailors he had actually seen or met? Or was this a fanciful imagination of the two worlds colliding? While I'm inclined toward the latter, it's impossible to say for certain without further research on Benwell himself. 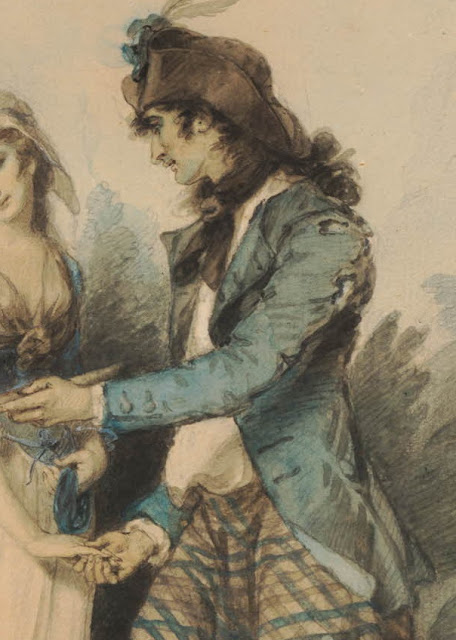 On his return, Jemmy wears the same clothes as when he bid adieu to Robin. His jacket is town and tattered, and he now has the sailor's trusty stick, but otherwise his dress is the same. We do get a better look at his ragged queue. In this image, he still wears breeches beneath his kilt, proving that their inclusion was no fluke on the part of Benwell.
Posted by Kyle Dalton at 7:00 AM