British Resentment or the French fairly Coopt at Louisbourg, 1755 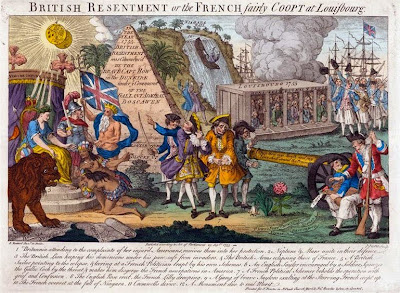 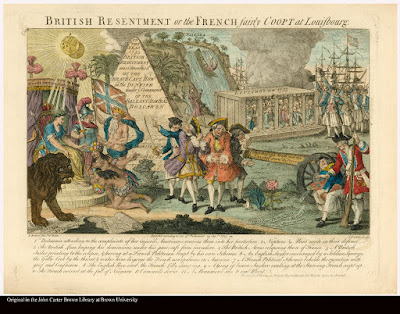 Copies of this cartoon can be found at Williamsburg, the Walpole Library, the John Carter Brown Early American Images collection, the Library of Congress, the William L. Clements Library at the University of Michigan, and other major institutions.

Louisbourg had long been a target of the British in their wars against French Canada. This political cartoon by Boitard was counting chickens before they hatched. It would be another three years of war between the American and French colonies of North America.

There are a good number of sailors in this print, so we'll get right into it! 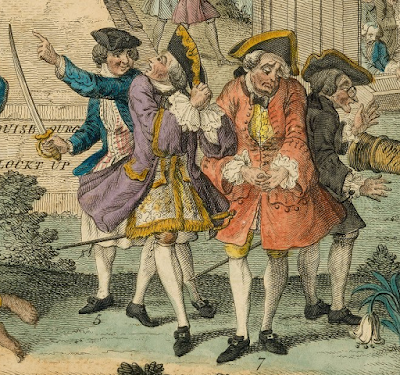 Starting from the left, there is a sailor at the base of the pyramid brandishing his curved cutlass and, in the words of Boitard, "pointing to the eclipse, & leering at a French Politician trapt by his own Schemes." This sailor wears a reversed cocked hat with narrow brim, held up by a skinny loop. His blue single breasted jacket has mariners cuffs with matching buttons. The waistcoat beneath is white with narrow vertical red stripes over a white shirt. A pair of white petticoat trousers and white stockings leading to pointed toe shoes with rectangular buckles complete his appearance. Peeking from beneath the petticoat trousers on his right leg is the tie that binds the breeches beneath. 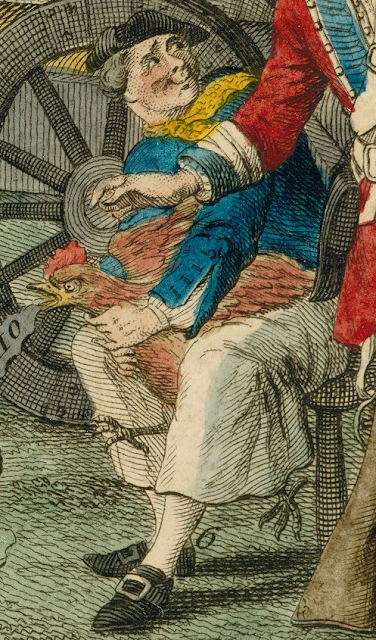 In the foreground on the far right, conversing with a soldier, another tar sits by a cannon where he "Squeezes the Gallic Cock by the throat, & makes him disgorge the French usurpations in America." He also wears a blue jacket, with its mariners' cuff open so we can see the white shirt beneath. Trousers or petticoat trousers run down to the top of his calf when he site. He wears a yellow neckcloth which is spotted, and may have red spots in the Williamsburg version, but the resolution is too low to be certain. It appears that this sailor, too, wears his cocked hat reversed. 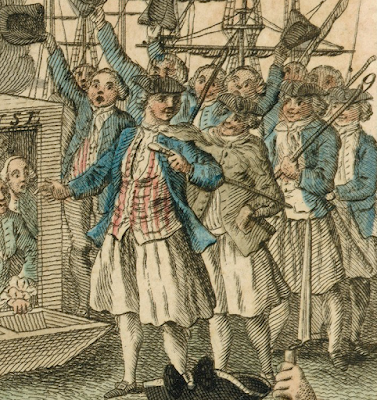 Behind the cannon "A Gang of brave Saylors [are] exulting at the Starving French coopt up." All of them wear petticoat trousers and carry or wear cocked hats, many of them bare bob wigs as they raise their hats in rejoicing. Most of them brandish long sticks. The mariner up front wears a striped waistcoat just like that of the sailor by the pyramid. Among them, the least uniform is only differentiated from his mates by the brown jacket he wears. Interestingly, most have flap pockets on their waistcoats and jackets, and at least one on his jacket.
Posted by Kyle Dalton at 7:00 AM