It has been a while since I dug into portrayals of eighteenth century common sailors in mass media. This is largely because there hasn't been much recently in the way of mass media that includes common tars. That changed last year with the third season of the Starz time-travel-costume-drama-bodice-ripper Outlander.

Based on the books by Diana Gabaldon, Outlander follows a 1940's woman in an eighteenth century world. A few episodes are drawn from Gabaldon's novel Voyager, in which the protagonists go to sea in the year 1766, sailing from Scotland to the West Indies in a merchantman. The main character, Clare Frasier, is pressed into service as a surgeon on a man of war during the passage.

One reason this flew under my radar is that Outlander is written for female audiences. I've never read the books, but many (probably most) of my female friends have. The television series has stirred up quite a lot of controversy over their costuming decisions, much of which revolves around female dress. The writers over at Frock Flicks have spent quite a lot of time sifting through the debates.

Today I'm going to look at their portrayals of maritime material culture and life among merchant sailors.

The first we see of the Wooden World is at the end of episode eight, when a young boy is kidnapped by Portuguese sailors. The sailors themselves are only seen at a distance through a spyglass, but we do get a good look at the Portuguese ship. I gotta say, they did pretty well. 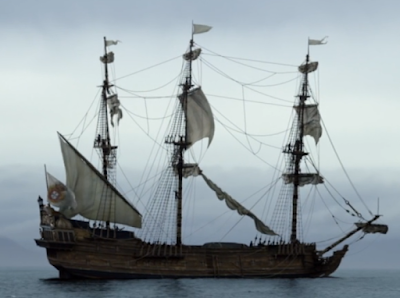 I've seen far worse. The high stern with overly ornate cabin windows gives the vessel the feel of an earlier age of shipbuilding, and the rigging hangs too loose. The ship is also remarkably drab, with brown saturating everything. It is not clear to me whether they intended the ship to be unpainted, which would be even worse. But for a prop that is on screen for a total of fourteen seconds, it's not as bad as it could be.

In episode nine, the series really puts to sea. We are introduced to the brig Artemus, and here is where the production team starts running into problems. Filming at sea is very difficult and very expensive. Steven Spielberg stated he was 'naïve' to shoot the 1977 film Jaws at sea, even though he was happy with the results. Even the most historically accurate age of sail film Master and Commander: The Far Side of the World only did a few shots at sea, and most of the shooting on sound stages and in water tanks. The crew of Outlander had to build ships with green screens to stay on schedule and in their budget.

The Artemus shows the compromises the crew made in constructing a vessel of the period. 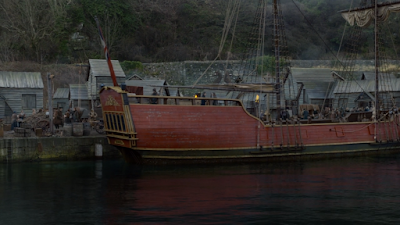 She is boxy and looks a bit like the Lego pirate ships I had as a kid. She's pierced for guns along the weather deck, but is just sheer walls of wood along the aft cabin. Her bulwarks are high for a merchantman of the period. Probably this was so that the crew could film on-deck shots without having the worry as much about the background, reducing the cost and time involved in creating a CGI seascape. 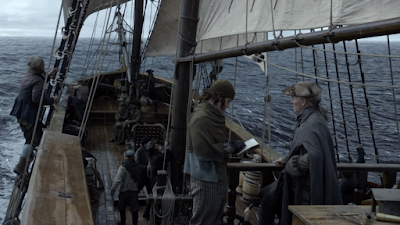 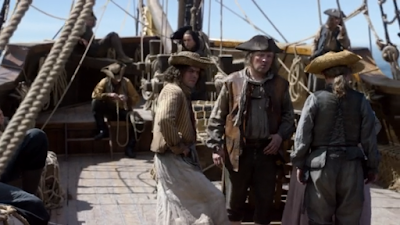 The sailors on the merchantman are less than impressive. Some wear odd shawls, there's lots of brown and beige, and almost no blue in their slop clothes. Few of them wear trousers or petticoat trousers. Most wear loose fitting breeches. Boots abound, as do cocked hats made of straw, neither of which appear on sailors of the mid-eighteenth century in sources I have found. These merchantmen look more like a costumer's compromise between Hollywood pirate films and Peter Weir's Master and Commander. Also, what's up with that leather jerkin? And why does nobody button up their damned waistcoats? 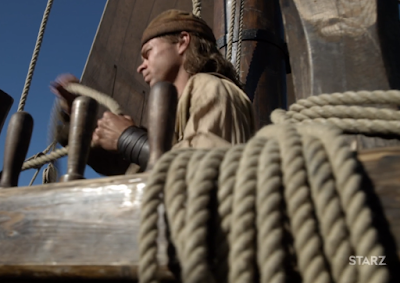 Perhaps the strangest choice was to equip a sailor in these odd leather wraps around the forearms. They don't seem to have any purpose other than looking olde-timey.

Bigger issues come with the plot. The sailors are portrayed as superstitious because someone didn't touch a horseshoe that was hastily and sloppily nailed into one of the bitts by the mainmast. The crew are so convinced that they are cursed that a riot breaks when they attempt to murder the man they believe responsible. I'll be writing soon about sailors' superstitions and religious beliefs, but I've never read anything like this for the period. A relatively secular form of superstition did exist, but its power was negligible, and it was not nearly so widespread as Hollywood would have you believe.

The sailors are portrayed as ignorant and dirty. Their clothes hang loose, and when the common sailor gets to speak, he is usually shouting some poppycock about curses. I was entirely unimpressed by their portrayal of the lower decks.

Thankfully, as we will see next time, they do a bit better with naval seamen.
Posted by Kyle Dalton at 11:50 AM