Last time, I wrote about the portrayal of merchant sailors in the Starz television series Outlander. Today I'll be looking at their portrayal of common naval sailors.

This inaccurate dichotomy is why I split the review of Outlander into two parts. Interestingly, the naval seamen are portrayed more accurately than the merchant seamen. 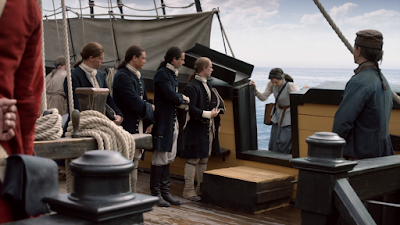 That's not to say it is without problems. As I've written before, sailors wore their hair short for most of the eighteenth century. In this series we see a lot of long hair and pigtails, and not a bob wig or bob style haircut in sight. 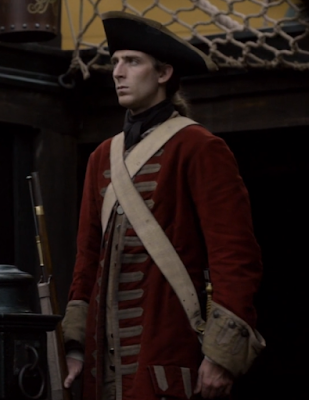 I don't usually talk about marines, but there's basically nothing about this uniform that is even remotely right, except that he's wearing red.

This guy is at least ballpark. His leather cap is just a fantasy item, but his blue jacket is decent. His sleeved waistcoat is buttoned weirdly, but bonus points for it peeking out from the cuffs of his jacket. His petticoat trousers are striped, which is not common, but also not unheard of, and the broad fall fly is correct for the period. His shirt is open and a black handkerchief hangs around his neck. Generally speaking, sailors wore their handerkchiefs over the collars of their shirts. Overall, he looks way better than most depictions of sailors from the period.

The officers are also only kind of correct. This midshipman's clothes hang like a potato sack, and he wears bizarre white canvas gaiters for some reason. The officers coats are clearly based on the original uniform in the collection of the National Maritime Museum for the 1748-67 regulations for officers uniforms, so it did come from a primary source. The problem is that this is 1766, and those long loose skirts and giant cuffs are no longer in fashion.
As a counterpoint, you can see that Vernon wears his breeches tightly fitted, the cuffs are significantly shorter, and this was still ten years before Outlander takes place. Naval uniform fashion did not freeze for a generation. At least they went to an original source.

There is a tendency in mass media to portray sailors as unchanging. Sailing traditions of the nineteenth century are projected far back through the age of sail. Such is the case with the stitch through the nose. 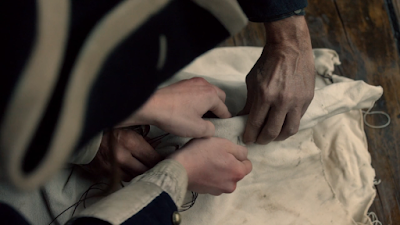 When sailors died and were sewn into their hammocks, the last stitch was supposedly passed through the nose of the dead tar just to be sure he actually was dead. I have never seen a reference to this practice in the eighteenth century.

There are bright spots. The actual burial scene was done pretty well. I really enjoy that they included a working class woman in the lower decks of the Porpoise. Not only was the presence of women aboard men of war a fact of the eighteenth century, but it undermines the tired notion that women were bad luck at sea, which does not appear to have been a belief at the time. Overall, the material world is much better than in the previous episode. 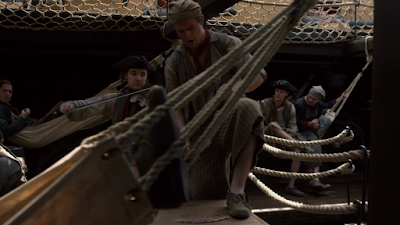 But seriously, does nobody own a pair of stockings on this ship? Sure, sometimes sailors went barefoot, but this is ridiculous.
Posted by Kyle Dalton at 8:34 AM