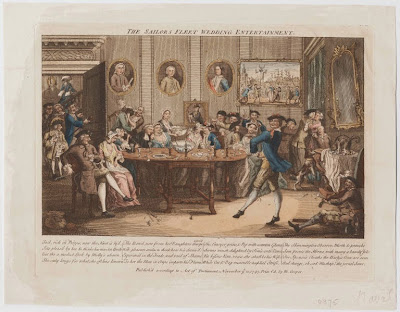 Among the most garish figures of the wedding celebration is a dandy tar who dances for the entertainment of the crowd. His cocked hat has an extremely short brim, and is decorated with a red bow on the left side. The perspective of the viewer is such that it is difficult to tell whether the hat is turned backward or merely cocked very far to the right. Either way, his neckcloth matches the color of his cockade. His blue short jacket flies up behind him as he dances around, making it impossible to tell if it is vented. We can say that it is single breasted. Beneath is a yellow waistcoat that is slightly brighter than the yellow striped breeches. The breeches are bound at the knee with both cloth covered buttons and a tie. White stockings finish off his slop clothes.

Behind him another sailor happily displays his vices: a tall glass and a long pipe. His cocked hat is reversed and his coat is (unsurprisingly) blue. 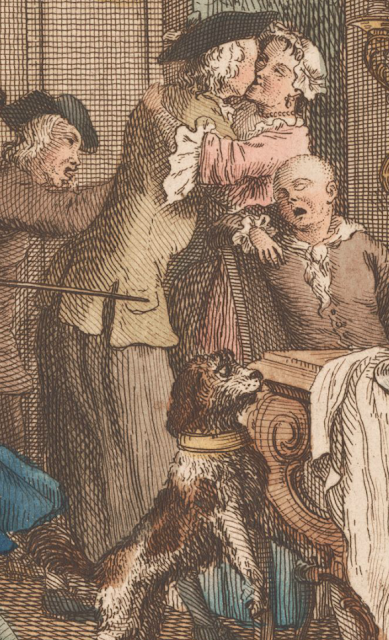 Off in the corner, a tar kisses his lass despite the shipmate losing his lunch beside them. The romantic sailor wears a reversed cocked hat, light brown short jacket with waist pocket flaps, and slops. The sick mariner wears a somewhat darker brown jacket and reversed cocked hat. Slumbering in his chair despite what is clearly a raucus party, another sailor wears a white neckcloth and single breasted brown jacket. 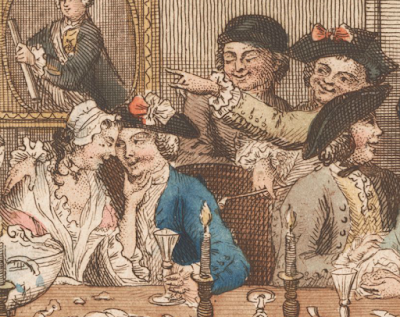 The groom holds both his wife and his glass. His cockade is the largest of the lot, and matches the color of his mates. The cocked hat is turned point forward. A blue jacket without collar, but with buttoned mariner's cuffs is the central garment of his wedding suit, though it appears he is wear a double breasted white waistcoat beneath. His cravat is also white.

Behind him and gesturing to the admiral on the wall is a shipmate carelessly clutching his pipe. Unlike the others in this scene, he wears his cockade on the right and the point on his cocked hat over his left eye. His jacket matches the hue of the sailors on the far right, and his mariner's cuffs are also buttoned. Behind him is a chap in a jockey style cap and darker brown jacket with cloth covered buttons. 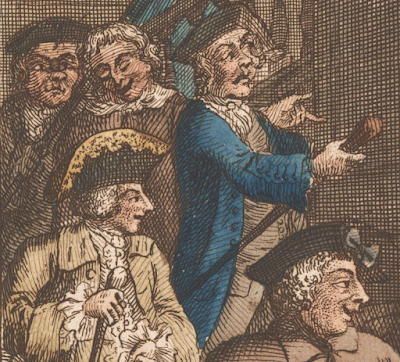 To the far left of the scene is another sailor. His cocked hat is without a cockade. A long waistcoat with pocket flaps rests beneath his unusually long jacket. The blue jacket is also with waist pocket flaps and buttoned mariner's cuffs. In his hand is the ever present stick we so often find sailors carrying.
Posted by Kyle Dalton at 8:00 AM