There are a lot of things I didn't expect when I started this website back in 2014. When studying depictions of sailors' slop clothes, I was surprised by the number of open cuffs, bob wigs, cocked hats worn reversed, and the variety of handkerchief styles. Among the most prolific accouterments of the sailor in artwork of my era is the stick.

A question arose from seeing so many representations of sailors and sticks: why? What purpose does the sailor's stick serve?

Now that I have combed through court records, memoirs, and especially period newspapers, it is my belief that the primary purpose of the sailor's stick was as a weapon.

That is not to say the sailor only ever used his stick as a weapon. Mariners are often depicted dancing with sticks.
Just as often, sailors are depicted bearing sticks in courtship. Including the very not safe for work print that accompanied a 1770 edition of the erotic novel Fanny Hill. Tame examples of sticks present in courtship are depicted below.
However, I have not yet found any written evidence of sticks being used for any purpose other than violence. This may simply be because sticks were common enough to pass without mention unless there was an exceptional circumstance that required they be mentioned, though the startling lack of any other source is stark. Further, sailors are very rarely depicted carrying sticks at sea or aboard ship, and this absence may be explained by that tool being primarily a weapon, and therefore discouraged or unnecessary afloat.

A hint of the purpose of sticks is in the memoirs of Olaudah Equiano. He faced the usual dangers that accompanied a life at sea: drowning, fire, death in battle, corporal punishment, and the like. As a black man sailing Caribbean and North American waters, Equiano was also subject to racial dangers like attempted kidnapping:


One day, while I was a little way out of the town of Savannah [Georgia], I was beset by two white men, who meant to play their usual tricks with me in the way of kidnapping. As soon as these men accosted me, one of them said to the other, 'This is the very fellow we are looking for that you lost:' and the other swore immediately that I was the identical person. On this they made up to me, and were about to handle me; but I told them to be still and keep off; for I had seen those kind of tricks played upon other free blacks, and they must not think to serve me so. At this they paused a little, and one said to the other—it will not do; and the other answered that I talked too good English. I replied, I believed I did; and I had also with me a revengeful stick equal to the occasion; and my mind was likewise good. Happily however it was not used; and, after we had talked together a little in this manner, the rogues left me. 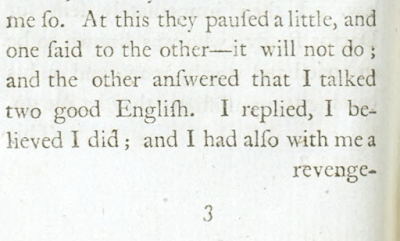 Equiano's use of the stick was for self defense, and he was far from the only one. When an unnamed sailor from the Hastings was accosted by a highwayman, the blustering tar declared 'that he expected some Broadsides before he surrendered' and later struck the highwayman 'on the Head with his Stick, which so stunned the Fellow, that he fell from his Horse.'

The use of the stick for personal defense is alluded to in a print depicting the murder of a midshipman from the Wager during the sailors' difficult time ashore after their vessel wrecked. As Captain Cheap shoots Midshipman Henry Cozens, a small group of sailors charges toward the sound of the pistol, sticks in hand.
In another case, two sailors jumped a third on the road and attempted to rob him. Both attackers resorted to striking their victim 'with a bludgeon' and 'a stick.' Despite the onslaught, 'by his Knife and Walking Stick, he defended himself so bravely, that they retreated with great precipitation, without their booty.'
In the above anecdote we see sailors using the stick both for offensive and defensive purposes, but the sources available lean heavily toward the stick as an offensive weapon. In 1758, a sailor used his stick to beat his wife for infidelity, a shocking crime for which he was incarcerated.
The use of sticks in domestic violence is echoed in a possibly apocryphal tale from 1790, a sailor saves his unfaithful wife by beating her lover with 'a large oak stick.'
This scene is repeated in the comic opera Thomas and Sally, and so depicted in this print that accompanied the score of that play.
On a larger scale, seamen would use their sticks in riots and brawls. In a trial at the Old Bailey in 1761, a number of sailors produced sticks in a tavern.
In October of 1763, a riot broke out in Shoreditch, and the sailors in the mob struck at the soldiers called to suppress them 'with their sticks.'
Sailors are also depicted as wielding sticks in the riot on the Strand in 1749.

The sailor in Philip Dawe's Bostonians Paying the Excise-Man is also armed with a stick, and is one of the most prominent figures in the American mob depicted there.

The rioting mess of shipmates who rescue the woman of ill repute from the law in John Collet's A Rescue, or Tars Triumphant also bear sticks.
At times the violence that sailors wrought with their sticks was celebrated. Increasingly during the Seven Years War and especially during the American Revolutionary War, sailors were used as personifications of Britain. And so their sticks came to have political meaning as well. When sailors forced their way onto the field in their enthusiasm to engage the French during the Battle on the Plains of Abraham, the story was repeated in several newspapers. These Georgian journalists were particularly impressed that the sailors were so eager despite 'some having cutlasses in their hands, others sticks, and some nothing at all.'
In 1781, a Mr. Churchill penned a metaphorical ballad in which the sailor's 'trusty oak stick' was used to beat down the French and those that would shelter them.

The theme of the sailor striking at personifications of Britain's enemies is quite present in cartoons of the latter half of the eighteenth century. A pair of sailors bearing sticks have struck a hard blow against a stereotypical Spaniard in Cruikshank's 1790 Political Sparring.
William Wells drew a sailor strangling a personification of the Dutch in 1783.
And in a poorly engraved cartoon by Thomas Colley, a British sailor watches over his French prisoners while brandishing his stick.
For attack and defense, the sailor carried a stick with him ashore. As a symbol of violence borne by the personification of Britain, it became an extension of Britain's might. In reality, it was used for the sort of nasty brawling that sailors were (rightly or wrongly) notorious for.
Posted by Kyle Dalton at 6:45 PM

Email ThisBlogThis!Share to TwitterShare to FacebookShare to Pinterest
Labels: stick