For as long as man has used gunpowder in warfare, he has stuffed whatever would fit into a barrel and fired it off. An unexpected find by the archaeologists working on the fabled 1718 wreck of the Queen Anne's Revenge was called to my attention by follower Adam Hodges-LeClaire and sparked my interest. Several news stories reported that a page fragment from Edward Cooke's 1712 A Voyage to the South Sea, and Round the World was found in the remnants of a cannon on Blackbeard's former ship.[1] It may have been wadding and not terribly unusual, nor perhaps even improvised, but archaeologists did find a bundle of iron rods packed in the barrel of a swivel gun.[2]

Improvised projectiles of the time were called langrage or langrel. William Falconer defined langrage in his 1780 An Universal Dictionary of the Marine:

LANGREL, or LANGRAGE, (mitrailles, Fr.) a particular kind of shot, formed of bolts, nails, bars, or other pieces of iron tied together, and forming a sort of cylinder, which corresponds with the bore of the cannon, from which it is discharged. This contrivance is particularly designed to wound or carry away the masts, or tear the sails and rigging of the adversary, so as to disable him from flight or pursuit. It is never used in royal ships, but very often by privateers and merchantmen.[3]

Most examples of improvised projectiles fit into this definition. Langrage appears to be roughly synonymous with 'canister,' a term not defined in Falconer's Dictionary of the Marine that appears less frequently in period sources than langrage.

Langrage was not improvised but deliberately manufactured. Numerous newspapers announce the amount of langrage captured from French forts, just as official requests by American naval officers during the Revolution ask magazines and state governments to provide langrage for their ships.

A notable example of a truly improvised projectile comes from the cooper John Nicol. Most days during his stint on the 28 gun frigate Surprise, he worked peacefully with his tools and anvil or 'study.' In battle he went below to help load powder. Nicol and other shipboard coopers were sometimes nicknamed 'bungs,' and it was by this name that he was hailed up from below by jovial Irish sailors during a heated battle with the American privateer Jason in 1779:

I was serving powder as busy as I could, the shot and splinters flying in all directions, when I heard the Irishmen call from one of the guns (they fought like devils, and the captain was fond of them on that account), 'Halloo, Bungs, where are you?' I looked to their gun and saw the two horns of my study across its mouth. The next moment it was through the Jason's side. The rogues thus disposed of my study, which I had been using just before the action commenced and had placed in a secure place, as I thought, out of their reach. 'Bungs for ever!' they shouted when they saw the dreadful hole it made in the Jason's side.[4]

As entertaining as Nicol's account is, the effects of langrage and improvised projectiles should not be understated. They wreaked awful devastation. Jacob Nagle recalled how he and the desperate crew of an unarmed American schooner managed to throw together a defense against loyalists in 1780:

There was about 20 odd of us on board but no arms to defend ourselves, except a short brass piece which was intended to be shiped on the capstan on the quarter deck of the privateer in case of boarding at close quarters. As luck would have it ther was cartriges sent with the 4 pounder, but no shot, as it was intended for musket balls. We lashed this piece to the bitts as secure as we could with rope, put a good charge into her; having no balls, the capt of the boat had a bag full of old nails, hooks, and thimbels, and we filled the peace to the muzzell. When they ware rounding two to come a longside, as they ware stem on, we left fly, which raked them fore and aft, not more than 8 or 10 yards distance. It came on them unexpected, like thunder. The shrieks and moaning were terible. She pulled 26 or 28 ores. Laying for a minnute in that sittuation, and the few that remained unhurt saw our deck full of men, expecting we ware well armed, we saw about 4 or 5 got out their oars and pulled away for the Jarsey shore. The gun carried away the lashing and fell over on the opposite side of the deck, however it was not wanted more.[5]

When the Continental Navy ship Trumbull fought the British letter of marque Watt in 1780, one of her sailors was struck 'by a piece of langrage, which took off the upper part of his head.'[6]

Captain Carey of the merchantman Earl of Gainsborough became separated from a convoy in 1746 and was attacked by two French vessels. He later condemned their use of improvised projectiles:

They not only fired Bullets into us, but slugs, chew'd Bullets, old Nails, Bottles, Stones, in short, every thing that the Mind of Man could devise most destructive to the Wretch that was so unlucky as to be wounded.[7]

Far more damning was the language of Captain Richard Tyrell of the 65 gun Buckingham which wrangled three French men-of-war that were guarding a convoy in 1765: 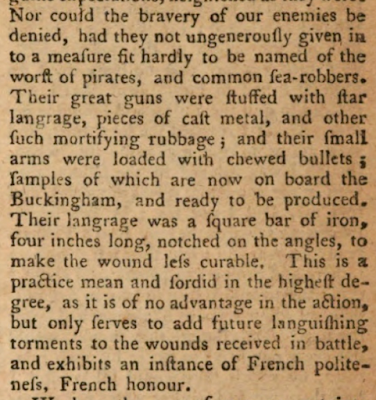 In his eyes, the French had 'given in to a measure fit hardly to be named of the worst of pirate, and common sea-robbers.' Loading langrage 'is a practice mean and sorbid in the highest degree, as it is of no advantage in the action, but only serves to add future languishing torments to the wounds received in battle, and exhibits an instance of French politeness, French honour.'[9]

Inflamed by the supposed French 'custom,' the writer of a brief notice in The Pennsylvania Gazette about the Seahorse fitting out for battle against privateers states that the use of langrage 'makes our People the more eager...to take Revenge for their Cruelty.'[10] 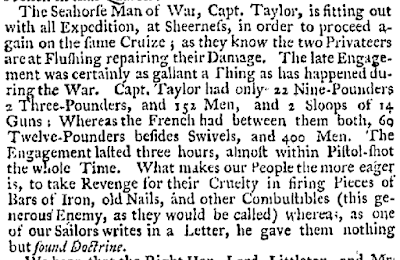 Another author, writing in The Public Advertiser, went so far as to declare the French were behaving 'contrary to the Rules of War.'[11] 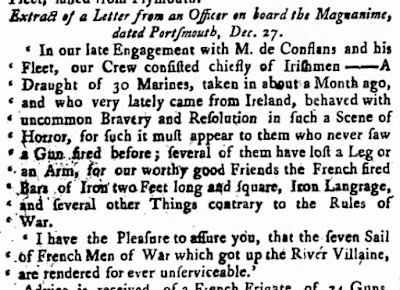 For all their shouting about the supposed violations of the 'Rules of War,' and Falconer's assertion that langrage 'is never used by royal ships,' the Royal Navy was willing to use it when they saw fit. Simeon Deane, reporting to his brother and representative of Connecticut in the Continental Congress Silas Deane in 1775, stated that the 64 gun Asia fired langrage into his ship 'which wounded one or two of our men.'[12] In a 1776 fight between an American shore battery and British armed vessels, there was an exchange 'with Ball, Langrage & Small Arms from both Sides for Several Hours.'[13] In the 1778 First Battle of Ushant, the French under Admiral Louis Guillouet, comte d'Orvilliers reported to their American allies that the Royal Navy used langrage to damage their rigging.[14]

The use of langrage was not the first nor last time that a rhetorical battle was waged over an instrument of war. When gas was brought to the battlefield in the First World War, its use was as widespread as the condemnations against it. The hypocritical shouts of armed powers have long decried the suffering and death of wounded soldiers and sailors, and ignored their own culpability. We should not forget that there were human beings down range from these horrifying weapons.

The study of arms is often impersonal and detached from the consequences wrought by their use. I think it is appropriate to end with the words of John Nicol, who gave us the humorous anecdote about the anvil on the Surprise. He wrote of his experiences in later battles:


During the action, my situation was not one of danger but most wounding to my feelings and trying to my patience. I was stationed in the after-magazine, serving powder from the screen, and could see nothing-but I could feel every shot that struck the Golia[t]h, and the cries and groans of the wounded were most distressing as there was only the thickness of the blankets of the screen between me and them...It is after the action the disagreeable part commences. The crews are wrought to the utmost of their strength. For days they have no remission of their toil, repairing the rigging and other parts injured in the action. Their spirits are broke by fatigue. They have no leisure to talk of the battle and, when the usual round of duty returns, we do not choose to revert to a disagreeable subject.[15]