Everyone's got to eat. It's as universal as death and sleep.

At meal time, sailors divided themselves into messes. Each mess generally consisted of six men, who divided a set portion of food among themselves and sometimes cooked it. In William Falconer's 1780 An Universal Dictionary of the Marine, his definition of the 'mess' is immediately followed by the definition for 'mess-mate':

MESS, a particular company of the officers or crew of a ship, who eat, drink, and associate together.
MESS-MATE, a companion or associate of the above division.[1]

In his memoirs, William Spavens gave a detailed description of life at sea and included an explanation of the mess system:


The Steward makes a fresh mess-book every month, so that the men can change their mess-mates, as often as they please; and when he serves their beef or pork, he calls forward one day and backward the next, to give them an equal chance of time to eat it.[2]

Messmates were self selecting. This meant that sailors chose which companions to spend time with, and which they could avoid. By giving sailors the opportunity to change their messmates about once a month, officers gave them the agency to reduce shipboard conflict.

For common sailors, messmates were family. Olaudah Equiano devoted pages of his Interesting Narrative to one of his closest friends. A young enslaved African held aboard the Aetna in 1760, Equiano's upbringing, education, ambitions, and beliefs were entirely different from his European shipmates. Among them, 'there was also one Daniel Queen, about forty years of age, a man very well educated, who messed with me on board this ship.' Queen taught Equiano how to shave and read, and gave him instruction in Christianity.


In short, he was like a father to me; and some even used to call me after his name; they also styled me the black Christian. Indeed I almost loved him with the affection of a son. Many things I have denied myself that he might have them; and when I used to play at marbles or any other game, and won a few halfpence, or got any little money, which I sometimes did, for shaving any one, I used to buy him a little sugar or tobacco, as far as my stock of money would go. He used to say, that he and I never should part; and that when our ship was paid off, as I was as free as himself or any other man on board, he would instruct me in his business, by which I might gain a good livelihood. This gave me new life and spirits; and my heart burned within me, while I thought the time long till I obtained my freedom.[3]

This relationship was beyond the difficult to define affinity that sailors harbored for the enslaved. The mess system enabled strong relationships that provided an emotional support network for sailors that was otherwise unattainable at sea. In her 1765 memoirs Catherine Jemmat, daughter of Rear Admiral John Yeo, related a 'humorous' tale of a sailor contemplating death:


The poor fellow begg'd to speak with his messmate, who went to him, and he told him he should soon be dead, and he would leave him his pay which was due.[4]

Jemmat's tale was fictional, but this sort of comfort and care was common among the brotherhood of mariners. Finding a spot in a welcoming mess was essential to social survival at sea. In Hannah Snell's authorized 1750 biography The Female Soldier, the ghost writer states that 'as she was very tractable, sprightly, and wiling, she soon was caressed by her messmates, for whom she would very readily either wash or mend their linen, or stand cook, as occasion required.'[5] By leveraging her skills learned ashore as a woman to relieve men of their more feminine tasks, Snell carved out a place in the mess and assured herself a niche in the Wooden World.

Messmates were central to sailors' lives. So much so that perhaps the strange practice of frying watches was an extension of the mess ashore. The ceremonial practice of frying watches was a communal activity in which a small group of sailors would participate, and that small group was most likely a mess.
The social benefits of the mess system also encouraged the socially toxic aspects of cliques. When Jacob Nagle's vessel took aboard soldiers, the redcoats were put on a parallel mess system. The japes of the mariners combined with the natural difficulties of eating afloat to make the voyage a miserable one for the poor soldiers:


When the pudings ware nearly done, before dinner, in the coppers, they would send a line from the fore top, and one hook on a large pudding, and up it would fly in an instant, and in less than five minutes it would be devoured. When they piped to dinner, purhaps six in a mess come to look for there pudding, had nothing to eat, though if detected they would be punished. In the meantime the poor soldiers ware 6 men upon 4 mens allowance. When going for their peas at dinner, with a large bowl full, and the ship rolling, away they went into the see scuppers, and the peas gone for the whole mess. There was no pity, but all hands laughing at each other. The seamen would go to the steward and get a bowlful of oatmeal and make a cake of it and bake it in the hot ashes till it was done and sell it to the poor fellows for six mens allowance of wine, which was three pints.[6]

These cliques sometimes manipulated the mess system to their advantage. This may sometimes have been mostly above board appeals to those in charge of preparing meals, which may have been the case with sailmaker William Bicknell of the frigate Richmond, who named the ship's cook in his 1764 will.[7] Sailors could also more directly game the system draw more rations than they should have been allowed. When rising through the ranks of the Connecticut Navy ship Oliver Cromwell, Christopher Prince earned the captain's trust by revealing to the ship's clerk how his shipmates were cheating the ship:


I then pointed to him from his own book the names of several heads of messes which I knew was not complete in their numbers, and he had granted to every mess six rations. We then went to one which he had granted six rations, and he had but one beside himself. There was four rations per day lost in one mess. He then asked him to name all in his mess as he had done to him before. 'There is Tom and myself is two, and there is John, 3, Josephes, 4, John Josephes Joe, 5, and Portuguese Joe, 5.' His name was John Josephes Joe, a Portuguese. He added four names to himself when there was but two in the mess...A similar deception was found in several of the other messes but not to that extent.[8]

Generally, a mess would send a single member to collect the food for the entire mess, which may have been shared out of a single bowl or plate. Sailors appear to have individually owned their utensils, as several excavations have turned up pewter spoons carved with the initials of common sailors.[9] Given the size of staved tankards from the period, these may also have been shared among the mess.
The communal and representational nature of the mess enabled manipulation, and officers had to find new ways to combat them. Prince was soon promoted to purser and steward, and instituted a system to verify the identity of the sailors who came to receive their rations for the day: 'I would not allow no man anything to eat or drink without a numbered ticket, with every man's name in the mess signed by the clerk.'[10]

Officers also had to prevent theft between the messes. The cliques created by the mess system encouraged rivalries between them, which might contribute to shipboard conflict. The Massachusetts privateer Defence, sunk in 1779, appears to have instituted a system to combat this. Shelley Owen Smith included an illustration of mess tags in the 1986 doctorate dissertation The Defence: Life at Sea as Reflected in an Archaeological Assemblage from an Eighteenth Century Privateer.[11] 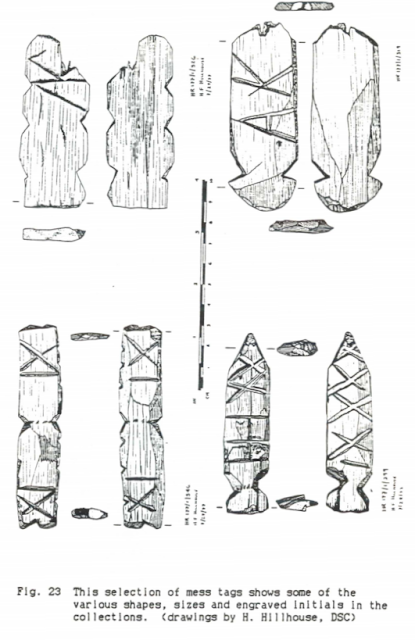 David Switzer described the find in his article "The Excavation of the Privateer Defence" in the journal Northeast Historical Archaeology:


Small wooden tags found in the galley area also carry initials and markings. Thought at first to be gaming pieces,the tags - some carved to resemble projectile points - are now known to have been used to designate a particular mess section of six or seven seamen. With string a tag was tied to a chunk of meat to be boiled down in the galley stove cauldron with the tag hanging over the side. At mess call, the "captain" of a mess section went to the galley with a kid and by means of the tag identified his portion which was carried back to be shared with his mess mates.[12]

In exploring the mess system, we see the contradictory nature of sailors' social lives. They were intensely personal and nearly familial in their care for one another, but could just as easily victimize anyone outside their overlapping circles of social connection. The mess system allowed sailors to cross incredible gulfs of cultural difference, while at the same time enabling them to take advantage of their shipmates. As with most of the sailors' world, the mess system reveals a contradictory society of conflict and acceptance.

Email ThisBlogThis!Share to TwitterShare to FacebookShare to Pinterest
Labels: mess