Today's guest post comes from Christopher P. Magra, Professor of Early American History at the University of Tennessee and an expert on naval impressment. His new book Poseidon's Curse: British Naval Impressment and Atlantic Origins of the American Revolution is available for sale now, and British Tars: 1740-1790 readers can get 20% by following this link.

Cambridge University Press published my new book, Poseidon’s Curse, which explains the longue durée, semi-global dimensions of the American Revolution. I spent ten years doing archival research for this book. I hope you will give it a read. In the meantime, enjoy the abstract below. 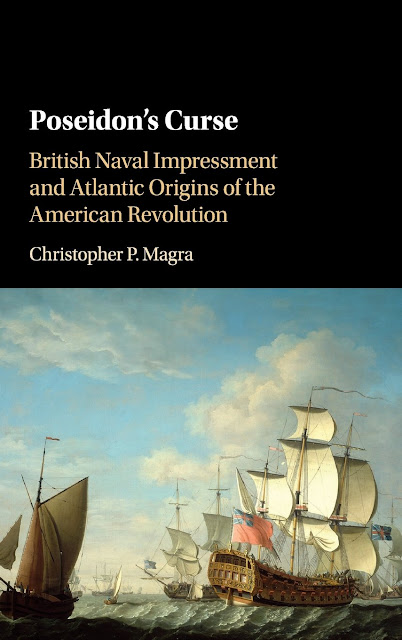 Parliament made it legal for the British navy to press mariners and ships into military service in North America in 1775. A 1708 law banned naval impressment in this part of Britain’s seaborne empire. But, this ban had become 'prejudicial' to the British navy, as it 'proved an Encouragement to Mariners belonging thereto to desert in Time of War, or at the Appearance of a War, to the British Plantations on the said Continent of America.'[1] The British navy was short on volunteers throughout the early modern era. Desertion remained an additional manning problem. And the navy needed commercial ships for troop transport, message delivery, and special assignment, as well.

News of the 1775 legislation spread very quickly across the Atlantic Ocean.  American newspapers printed detailed descriptions.[2] Colonial readers learned that the Crown and Parliament had expressed their willingness to do everything in their power to force Americans to comply with the new law.

William Tudor, a Harvard graduate who practiced law in John Adams’ office in Boston, described the sensation the impressment legislation caused in Massachusetts. In Tudor’s words, the new law 'had almost as great an Effect on the People in this Town as the Arrival of the Port Bill produced.' The Boston Port Bill, one of the Intolerable Acts, or Coercive Acts, closed the large American seaport to all commercial traffic in 1774 in response to the Boston Tea Party. The new law, Tudor believed, generated a great deal of anxiety in the maritime community. 'The Women are terrify'd,' Tudor wrote, about the fate of their mariner husbands, sons, and brothers. Local merchants were 'dispirited' about the fate of their commercial shipping and perishable cargo. Tudor expected 'The Gloom which at present prevails will go off in a Day or two,' as it had in the wake of the Port Act. He believed Americans would stir from their shock and take action to forcibly resist the new impressment law. 'Americans may now show whether they deserve Freedom,' Tudor wrote, 'by discovering Resolution' and resisting 'Slavery.'[3]

Tudor’s law partner, John Adams, was serving as a representative from Massachusetts in the Continental Congress in Philadelphia, Pennsylvania. Adams referred to the 1775 legislation as the 'Piratical Act; or Plundering Act,' as it robbed Americans of maritime employment and profits from overseas trade. Adams also saw it as the straw that broke the camel’s back. He believed it was responsible for 'sundering' America from the British Empire 'I think, forever.'[4]

Adams served on the 'Committee of Five' that drafted the American Declaration of Independence in 1776. The committee thought fit to include naval impressment as a grievance in this momentous document. Congress approved the grievance. It stated that the British government 'constrained our fellow Citizens.' These citizens had been 'taken Captive on the high Seas.' They were forced to serve in the British navy at the start of the Revolutionary War, and they were made 'to bear Arms against their Country, to become the executioners of their friends and Brethren, or to fall themselves by their Hands.'[5]

There was an immediate context for this grievance. By 30 June 1775, there were twenty-nine British warships stationed off the North America coast between Florida and Nova Scotia. These warships carried a total of 584 guns and 3,915 men.[6] By 9 October 1775, another six warships patrolled North America’s coastline in an effort to suppress rebellion along the waterfront.[7] The commanding officer, Vice Admiral Samuel Graves, resorted to impressment to accomplish this mission. At Boston on 20 February 1775, he explained to the Admiralty, 'Necessity obliges me, contrary to my inclination, to use this method to man the King’s Ships.' He reported that 'The Ships with me at Boston are beginning to be sickly, they have lately lost several men by deaths, and as desertions happen, notwithstanding the utmost care is taken to prevent it,' he had ordered press gangs to do their work along the eastern seaboard.[8] Americans that read and heard the Declaration would have understood that Graves’ gangs had taken men and made them fight their neighbors.

There also existed a longer and geographically expansive context for this grievance. The British navy had been pressing mariners and commercial vessels around the Atlantic Ocean for over one hundred years by 1776. It had 'constrained' a lot of people, not just Americans, and not only maritime laborers. The Atlantic approach to studying the past that I use in Poseidon’s Curse helps me bring this deeper context to the surface.[9]
There were Britons living and working along the coast of Africa, in the British Isles, in the Caribbean, and on the eastern seaboard of North America who resented the ways in which press gangs constrained their economic freedoms. Maritime entrepreneurs, including merchants and ship owners who charged freight rates to transport goods, believed the state appropriation of ships and maritime laborers posed a threat to profit margins. There was a great deal of profit to be made in shipping lucrative commodities such as dried, salted cod, slaves, sugar, and tobacco long-distance to overseas markets. Impressment elevated labor costs, which shrunk profit margins. It also delayed, disrupted, and destroyed maritime commerce. The requisitioning of privately owned commercial vessels led to property damage and temporary and permanent forms of property loss. Members of the British Atlantic business community closely linked the preservation of their private property rights and their ability to maximize profits with their political liberty.

By the eighteenth century, employment options and earnings had become vital to maritime laborers and their families. They viewed them as necessary survival mechanisms in a capitalist system. They may not have loved them, any more than they had love for competitive labor markets, but they found them necessary. Moreover, they associated these economic freedoms with their political liberty. Impressment curtailed these freedoms without providing workers with a viable alternative. The American Revolution was moored in this deep and wide sea of shared resentment.

Having said this, Americans felt especially constrained. Though press gangs were most active in Great Britain, they were the most highly regulated there. The British government established the Impress Service for coastal communities in the British Isles during the eighteenth century to ameliorate the harsh effects of naval impressment. The Admiralty stationed regulating captains in coastal communities and set up rendezvous points to carefully process pressed men. This was explicitly done to limit the threat to Britons’ liberties. Between 1746 and 1775, Parliament permanently banned impressment on and around Newfoundland and Caribbean island colonies to encourage commerce and safeguard economic and political freedoms in these areas. Americans were jealous about the encouragement the British government bestowed upon other colonists in the Atlantic World. They were also particularly anxious about the implications of this imperial favor. They feared that it meant Americans would support the expansion and maintenance of Britain’s seaborne empire at their own expense. There were Americans who believed they were being unduly constrained, while others were allowed to prosper. The Revolution was moored in these particular concerns that were unique to North America.

The American Revolution was not solely the result of frontier land disputes or even just events in North America. There was demand for naval protection along the four corners of the Atlantic Ocean and across shipping lanes. The British navy pressed mariners and commercial vessels into military service to provide this protection. The British government deemed military force necessary for the elaboration and maintenance of overseas colonies and trade. The state appropriation of free labor and private property generated widespread resentment among business owners and workers. Britons on both sides of the Atlantic Ocean wanted the benefits of a seaborne empire without too many costs. They sent anti-impressment signals to Parliament. The British government decided to favor certain Atlantic interests over others. These decisions incentivized the behavior of stakeholders who defended the imperial system. They motivated colonists who were not beneficiaries to want to leave that system. Events on and around the Atlantic World shaped the contours of the imperial crisis.

The state appropriation of free labor and private property played an important role in the decline of Britain’s seaborne empire. These constraints helped convince colonists that there were imperial chains that needed to be cast off. Colonial American merchants and mariners resented the ways in which press gangs negatively impacted their living standards and their economic freedoms. A mid-eighteenth-century shift in Britain’s blue water policy and impressment legislation in 1708, 1746, and 1775 converted this resentment into rebellion.

Alexis de Tocqueville captured Americans’ sense of being constrained within Britain’s seaborne empire. He wrote, 'The Declaration of Independence broke the commercial restrictions which united them to England, and gave a fresh and powerful stimulus to their maritime genius.'[10] Of course, Americans still had work to do to free themselves from British naval impressment. It took the War of 1812 to finally lift that constraint.

---
[1] 15 George III, c. 31.
[2] See, for example, Boston Evening Post, 3 April 1775 and 10 April 1775.
[3] William Tudor to John Adams, 4 April 1775. Papers of John Adams, Digital Edition, Massachusetts Historical Society,  http://www.masshist.org/publications/apde2/view?id=ADMS-06-02-02-0086.
[4] American Archives, documents of the American Revolution, 1774-76, http://amarch.lib.niu.edu/redirect, Series 4, Vol. 5, 472.
[5] The Declaration of Independence, http://www.loc.gov/rr/program/bib/ourdocs/DeclarInd.html.
[6] “Vice Admiral Samuel Graves to General Thomas Gage,” Boston, June 30, 1775, William Bell Clark, et al., eds.  Naval Documents of the American Revolution (Washington, D.C.: U.S. Government Printing Office, 1964-), (hereafter NDAR) Vol. 1, 785.
[7] The National Archives, Kew, England, Records of the Colonial Office, 5/122/35.
[8] NDAR I:98.  Vice Admiral Samuel Graves to Admiralty Secretary Philip Stephens, 20 February 1775.  For evidence that Graves continued to order the captains under his command to press Americans, see NDAR I:177.  On 24 June 1775 the Admiralty acknowledged “that many of your Ships are considerably short of their Compliment of Men.  And that there is no likelihood of making up the deficiency by Volunteers.”  They sent Graves press warrants “empowering the Officers of the Ships of your Squadron to Impress such a Number of Seamen & Seafaring Men as may be necessary to complete their respective Compliments.  The Clause of the Act of the 6th of Queen Anne which forbid the impressing of Seamen in America being repealed by an Act passed in the last Session of Parliament as you will see by the enclosed Copy which I send you.”  NDAR I:492.  Stephens to Graves, 24 June 1775.
[9] Other Atlantic approaches to the study of the American Revolution include Janet Polasky, Revolutions Without Borders: The Call to Liberty in the Atlantic World (Yale University Press, 2015); David Armitage, “The First Atlantic Crisis: The American Revolution,” in Philip D. Morgan and Molly A. Warsh, eds., Early North America in Global Perspective (New York: Routledge, 2014): 309-336; David Armitage, “The American Revolution in Atlantic Perspective,” in Nicholas Canny and Philip Morgan, eds., The Oxford Handbook of the Atlantic World, 1450-1850 (Oxford University Press, 2011): 516-532; Thomas Bender, Laurent Dubois, and Richard Rabinowitz, eds., Revolution!: The Atlantic World Reborn (New York: Giles, 2011); and Wim Klooster, Revolutions In the Atlantic World (New York University Press, 2009). None of this scholarship on the origins of the Revolution focuses on naval matters.
[10] Alexis de Tocqueville, Democracy In America, edited by Bruce Frohnen (New York: Gateway Editions, 2003), 333.
Posted by Kyle Dalton at 11:15 AM