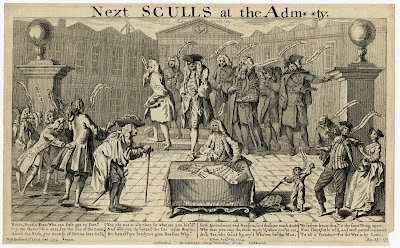 "Next Sculls at the Adm**ty," George Bickham the Younger, 1744, British Museum.

In this political cartoon, Bickham pokes fun at the new appointees to the Admiralty. Bickham is highly critical of the Admiralty, blaming them in this piece for both the loss of the Victory (launched 1737) and the Battle of Toulon. As a sidenote, the Victory was discovered in 2008 and is a fascinating find. She dragged well above 1,000 crewmen down with her. 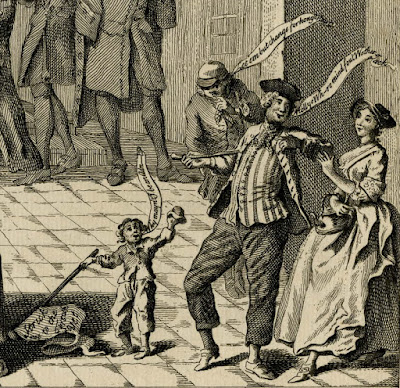 Gentlemen of various vices dot the scene, but our interest is held at the far right. Two grown sailors and a young boy are gathered by a woman who is addressed as "Moll ye Wh[or]e." 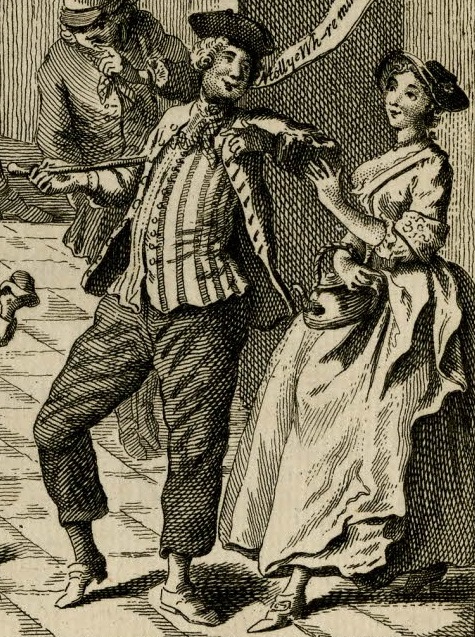 The central figure in this group is a sailor with a small untrimmed cocked hat with the point forward. His hair is in a short bob style, and a check neckcloth hangs from his neck. Our mariner's single breasted jacket ends below the waist and over a single breasted waistcoat with vertical stripes. Buttoned mariner's cuffs are just visible on his sleeves. Notably, his trousers are darker than the jacket. Pointed toe shoes with rectangular buckles are fitted to his feet. Tucked under his right arm is a sailor's walking stick. 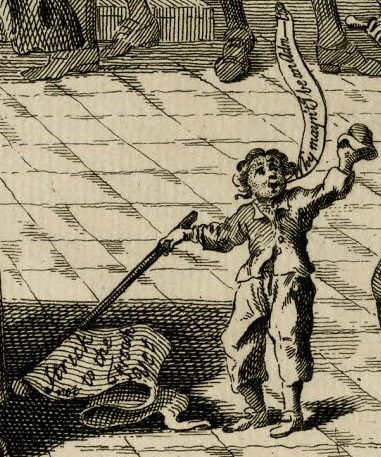 To the left of the sailor is a young boy, possibly a ship's boy, given his dress. In one hand he hold a cap of some sort, and he holds a sailor's stick in the other. His single breasted jacket ends at the waist, and hangs over his trousers. The trousers end at about the top of the calf, and are considerably lighter than that of the adult tar beside him. 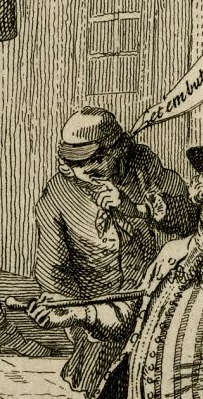 Behind them stands a sailor with a concerned look on his face. He wears a jockey style cap with a button at its peak and a brim that is a considerably different shade than that of the crown. His hair is also cut in a bob style, and like his mate he wears a checked or plaid neckcloth. His jacket is without collar or cuffs (that we can see) and is double breasted. Beneath is a waistcoat that appears to be (but is not certainly) single breasted.
Posted by Kyle Dalton at 8:27 AM