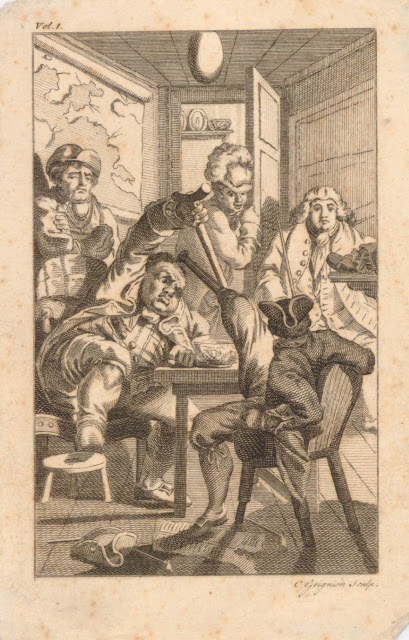 The Adventures of Peregrine Pickle by Tobias Smollet was a popular comedic novel first published in 1751. Peregrine Pickle, the titular character, is something of a prodigal son. Smollet follows Pickle from his youthful dalliances and failings to ultimate redemption and maturity. Early in the story, Pickle is neglected by his family and taken in by Commodore Trunnion. Smollet describes the Commodore as a man who


has a power of money, and spends it like a prince—that is, in his own way—for to be sure he is a little humorsome, as the saying is, and swears woundily; though I'll be sworn he means no more harm than a sucking babe. Lord help us! it will do your honour's heart good to hear him tell a story, as how he lay alongside of the French, yard-arm and yard-arm, board and board, and of heaving grapplings, and stink-pots, and grapes, and round and double-headed partridges, crows and carters. Lord have mercy upon us! he has been a great warrior in his time, and lost an eye and a heel in the service. Then he does not live like any other Christian land-man; but keeps garrison in his house, as if he were in the midst of his enemies, and makes his servants turn out in the night, watch and watch as he calls it, all the year round.

By examining the above image, a frontispiece to the 1769 edition, I'll be departing a bit from the usual focus of this blog. Commodore Trunnion and Lieutenant Hatchway are old sailors, but former officers in the Royal Navy. With a fortune and servants, Trunnion and his cohorts are not common sailors. Even so, they show the rough edges that all men who follow the sea share. By examining their dress and posture, we can say something about how mariners in general were viewed.

As a note, I will not be tagging the clothing of any of the figures in this image except the character who is explicitly described as a common sailor: Tom Pipes. 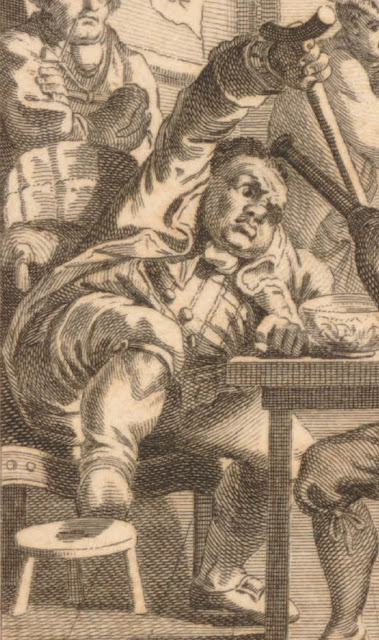 Trunnion is a globular fellow. His coat is trimmed with turn back cuffs. At his neck we can make out a cravat over the striped shirt or waistcoat beneath. His breeches are bound with buckles beneath the knees, As a nod to the character's description, Trunnion is depicted with a darkened eye, but not a patch as I might expect. Using his crutch, he parries the attack of Lieutenant Hatchway. 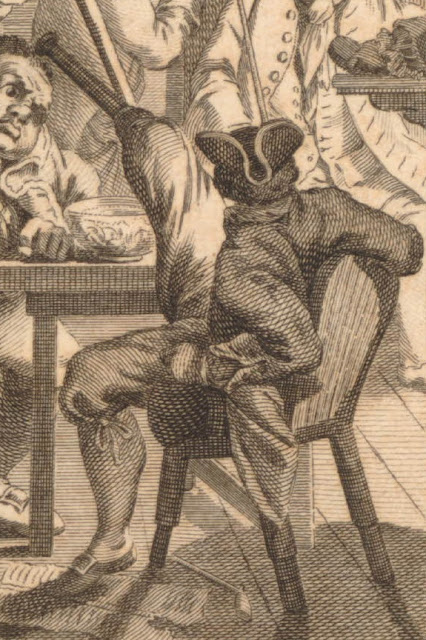 Mr. Hatchway strikes at Commodore Trunnion with his wooden leg, but does so with enough of a swing to avoid the punch bowl. He wears a cocked hat bound along the brim, and a neckcloth bunched up about his neck. His coat has open mariner's cuffs, revealing a checked shirt beneath. Hatchway's breeches are tied below the knee, not unlike many mariner's breeches we've seen before. All of this, combined with Hatchway's bob style hair, give us a set of clothes more akin to that of a common sailor than a gentleman. 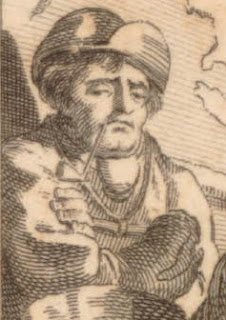 Tom Pipes is an old boatswain's mate who followed Commodore Trunnion from the sea. Given employment in Trunnion's manor, Pipes finds himself rounding up and herding the servants for their "watch and watch."


Tom is a man of few words, but an excellent hand at a song concerning the boatswain's whistle, hustle-cap, and chuck-farthing—there is not such another pipe in the county—so that the commodore lives very happy in his own manner.

Boatswain's Mate Tom Pipes wears a barge cap with an upturned front. A similar cap is seen in the collection of the National Maritime Museum belonging to a member of Admiral Lord Hood's barge crew. The Hood barge cap is wooden, and laid over with velvet. Given the way Pipe's cap appears stiff and unyielding, we might assume that his cap is likewise covered wood.

Around Pipes' neck hangs a string bound around a cylindrical object. This might be a bosun's whistle, but looks nothing like the originals I have seen thus far. It could well be that the artist is unfamiliar with bosun's pipes. If that is the case, it strikes me as odd that the artist is familiar with barge caps, but not bosun's pipes. Regardless, Pipes wears a jacket without collar and slit cuffs. Hanging from the corner of his mouth is a clay tobacco pipe.
Posted by Kyle Dalton at 7:00 AM