A Scene on board His Majesty's Ship Deal Castle, 1775 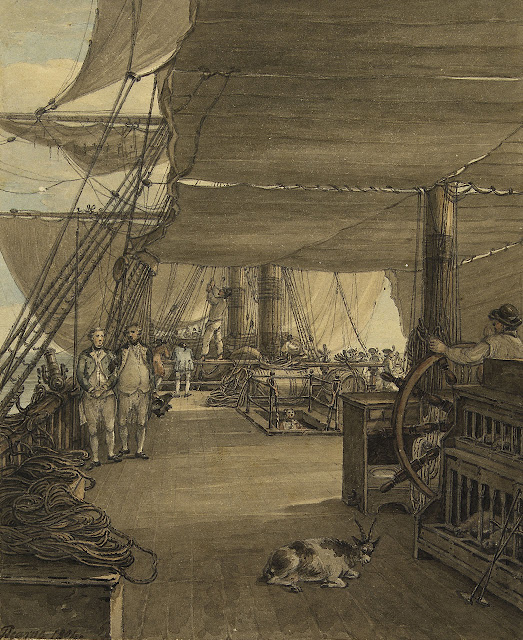 Before I go into my usual examination of this piece, it is necessary to address my methods for deciding which pieces I include. There were many reasons that I started this project, but one of them was to address the common use of French Revolutionary or Napoleonic images in illustrating the earlier decades of the eighteenth century. With the plethora of primary source images of common sailors and officers that can be used for education and interpretation, it was my hope that collecting and sourcing these in one place would make it easier for everyone to tap into the past.

To that end, I have only used images that were made from 1740 to 1790, and depict events that happened in those years. Necessarily, this must exclude many images made immediately after the years of my examination, but about events in the half century of this blog.

I'm making something of an exception for this piece. It is a wonderful representation of the day to day life on deck, and does not appear to have been too affected by the passage of time. According to the curators at the National Maritime Museum Hearne was probably basing this image off of studies made at the time. These studies do not appear to have survived. This places today's illustration in the strange position of being drawn by the original artist, based on his original illustrations, but not actually completed until forty years after the event.

Thomas Hearne created this illustration from his memory of a return voyage to England after a stint as a topographer in the Caribbean. The Deal Castle was a 20 gun ship that could provide a relatively quick transatlantic trek for the artist. 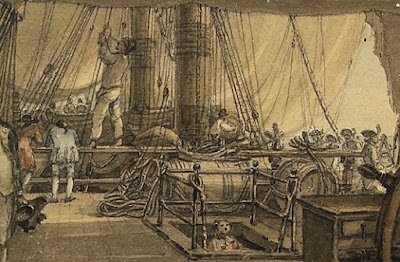 Two officers standing along the larboard rail (not visible in the above detail) which is also the likely direction of the wind, judging by the position of the sails. This would suggest that one of the officers is the Captain, who traditionally stands on the windward side of the quarterdeck. Off to starboard, a gaggle of officers in cocked hats peer through octants, and may well be the midshipmen of the Deal Castle. Coming up out of the quarterdeck gangway is a marine.

Standing on the rail over the gundeck, a tar adjusts a block. He wears a black cap of indeterminate style, a light colored jacket that ends at the waist, and a pair of white trousers.

There are two things that instantly catch my attention with this figure. First, it appears that he is wearing something at the waist, which might be a rigging belt. This is an item that must certainly have been used, but I have never seen it depicted in a primary source. Second, he is barefoot. A common assumption among historians and reenactors is that sailors went barefoot while aboard. This makes a lot of sense (just try walking a holystoned wooden deck with smooth leather soles), but this is the only image I'm aware of that actually shows it.

There are a few other figures working further forward, but too indistinct to draw any conclusions. 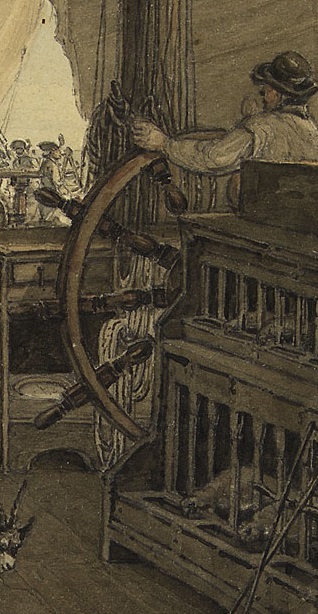 Beside the helm is a stack of coops for fowl, and a friendly goat. The helmsman stands in shirtsleeves with a black neckcloth. His black round hat with a wobbly brim sits atop his head, and is tilted slight back.
Posted by Kyle Dalton at 8:00 AM