The Flight from Dover/The Arrival at Calais, 1768 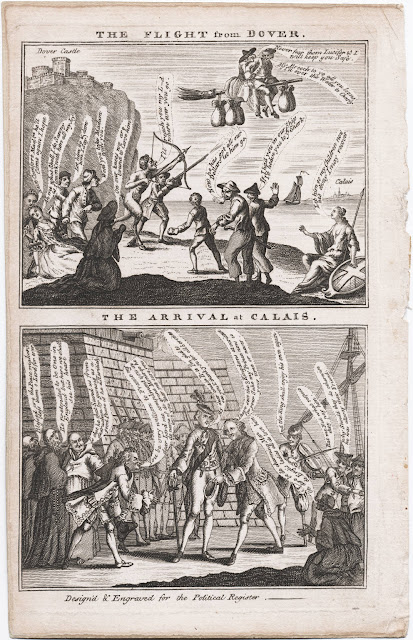 The Walpole Library does not have a catalog entry for this piece on their website. John Carter Brown Library's Early American Images database does have a catalog entry, but the wrong image in its place. By combining these resources, we can examine the primary source and have some context.


Lord Bute is depicted fleeing to France in the face of political turmoil. In the first images, he rides the stick of a witches' broom. Their ride is weighed with the gold of the people, which stands in substitute of his wife who is left in England. 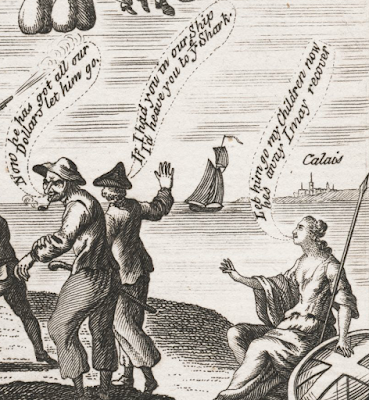 A disreputable looking chap dismisses Bute with the words "Now he has got all our Dollars let him go." Perhaps in response to this, a sailor calls out to the flying politician "If I had you in our Ship, I'd heave you to ye Shark."

Jack wears a cocked hat with the point forward. His hair is short and in a bob style. A dark (perhaps black) neckcloth hangs over the back of his jacket. The jacket itself has turned back cuffs and a single vent at the back. His trousers are wide legged, but long, ending about mid-calf. The stockings are plain, but due to the shading, we can't say what color they might be. As you might expect, he carries a stick.

Despite what "The Flight from Dover" suggests, witchcraft was not a major form of cross-channel transportation in the eighteenth century. The topsail sloop seen in the detail above is probably a Calais packet. These vessels were the best way to get from England to France (from Dover to Calais) throughout the era. I have only touched on this method in the past. 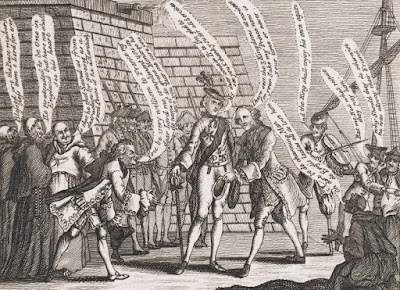 In Calais, Bute is feted by vile looking Catholic clergy, French soldiers and foppish gentry, and the Pretender himself: Bonny Prince Charlie. Two shocked looking sailors, presumably mariners of his packet, look on in disgust. "Rat me Ned," says the first, "what respect they pay him."
"Why should they do otherwise," replies Ned, "he was allway their Friend."

The tar on the left wears a single breasted jacket with dark buttons and slit cuffs. His cocked hat is worn backward over bob styled hair. A plain neckcloth is tied about his neck, and trousers matching those of the sailor above hang down to the calf. Dressed much the same, Ned is somewhat portlier than his mate. His hat is also worn backward over bob style hair. It appears (but is not certain) that he wears a single breasted waistcoat under a darker jacket. Otherwise, he wears a plain neckcloth and slops/petticoat trousers or trousers.
Posted by Kyle Dalton at 7:00 AM