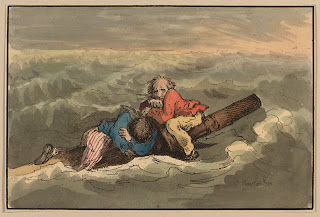 Rowlandson is largely remembered for his raucous satirical pieces, and occasional pornography. Still, the caricaturist was a serious artist as well. Using the medium of mass printing, Rowlandson could churn out pieces that would make his audience laugh, or make them contemplate life. "Misery" is one of his little known pieces, and certainly reflects the latter.

A pair of sailors, perhaps the only survivors of some catastrophe, cling to wreckage. Adrift on an open and choppy sea, we can see to the far horizon, where there isn't a speck of hope for the unfortunate tars. Given the expression on the face of the red jacketed sailor, it is probably fair to say that nothing but sea stretches behind us as well. The use of a long horizon in the distance, and the staring eyes of a sailor looking beyond and behind us, places us in the same desperate mind as them. 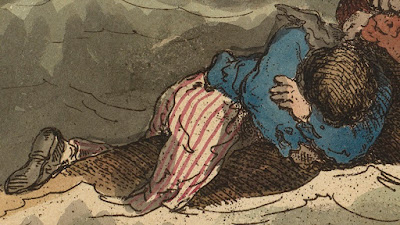 The sailor on the left might be dead, or sleeping off his exhaustion, or too despairing to do more than cry into his sleeve. He wears a blue jacket with slightly scalloped mariner's cuffs. A black neckcloth hangs over the back of his jacket. White trousers with narrow red stripes running vertically hang over white stockings and black shoes. 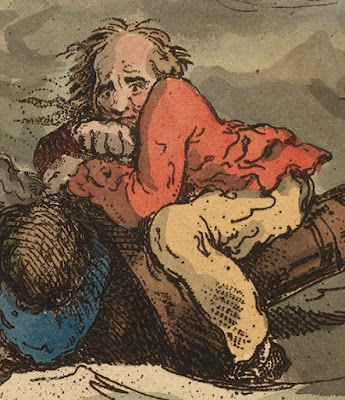 Possessed with a look of hopelessness, this sailor wears a red jacket with mariner's cuffs, and perhaps with flap pockets at the waist. His trousers are more of a beige, perhaps being a bit weathered. Rowlandson illustrates his black neckcloth with dots alone, giving the illusion of movement on the windy sea.
Posted by Kyle Dalton at 7:00 AM