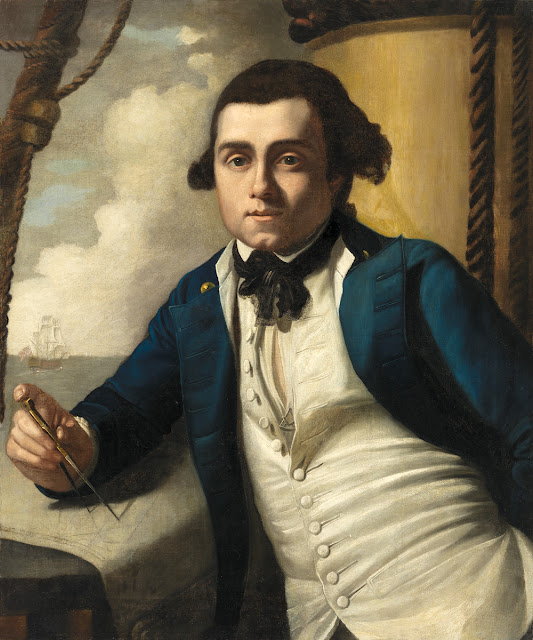 As with some previous posts, this one does not focus on a common sailor, and so will not be tagged.

The Master of a Royal Navy vessel occupied an interesting space in the naval hierarchy. Highly skilled, the Master served as navigator for his vessel in the odd position of a senior warrant officer. Masters were not considered common sailors, but neither were they commissioned officers. According to Eberhard Karls Universität PhD candidate Lena Mosser, who is writing her dissertation on Masters, the Royal Navy did not even designate a uniform for them until 1787, and that was the same uniform worn by all warrant officers. Masters did not receive their own distinctive uniforms until 1807.

Interestingly, at the time this portrait was done, the Continental Navy did specify uniforms for Masters. Perhaps this can be attributed to the more democratic ideals of the American rebels, or as a reflection of their hope for merit to be properly rewarded and recognized.

It was as a Master in the Royal Navy that William Bligh found his initial fame. Bligh served as Master of the Resolution under Captain James Cook for the wildly successful exploring expedition around the world. Cook praised Bligh's competence in navigation, and it was this esteem that earned him the Bounty. Unfortunately for everyone involved, Bligh's dedication and success with navigation did not translate to naval leadership.

Bligh's suit is not properly a uniform, nor is it a common sailor's slop clothes. He wears a bob wig with what appears to be a short queue at the back. A black silk cravat is bound in a large and fanciful bow beneath the white collars of his shirt. The slit of his shirt is pinned with a silver masonic square and compass. His blue wool coat is double breasted and lined in white, with simple turned back cuffs and domed brass buttons. His waistcoat is a single breasted white affair with cloth covered buttons and slit pockets at the waist. Bligh's breeches (or possibly, though unlikely, trousers) are white.
Posted by Kyle Dalton at 8:54 AM