Located on the Northern coast of South America between Guyana and French Guyana, Suriname is now an independent nation. At the time this painting was done, Suriname (spelled Surinam during the colonial period) was a slave economy that exported a number of goods, the most important of which was coffee.

Prominent Rhode Island sea captains who had arrived in the Dutch colony in the 1750's met the Bostonian portraitist John Greenwood there, and commissioned him to paint the above scene. Gathered around the table are two future governors of Rhode Island, and the future commodore of the Continental Navy Esek Hopkins. In the doorway, holding up a light for a man who couldn't quite hold his liquor, is John Greenwood himself. These identifications are attributed by the National Humanities Center, and you can read a very brief treatment of the painting here.

I have a copy of this painting hanging on my wall. The jovial nature of the white men, juxtaposed against the suffering and naked slaves on the far left, is striking. It is fascinating the see the relatively rich and powerful so vulnerable: puking catching on fire, being spilled on; broken bottles, pipes, and chairs scattered about. Add in to that the tiny details of material culture and the maritime aspect of the piece, and Greenwood has won me over with a painting I could stare at all day.

It is somewhat surprising then, that I hadn't really paid a mind to the dancing sailor on the far right. 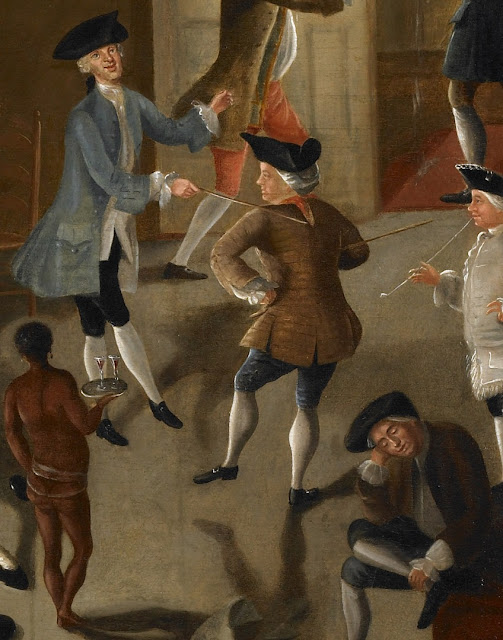 It may be that this is no common sailor. Despite my efforts, I could not find an identification for anybody in this detail, save for John Greenwood in the back. After all, sea captains of the 1750's could and did dress in clothing that was at least inspired by the common tar.

Whoever this mariner is, he has been painted into a tradition of mid-eighteenth century dancing sailors.

The dancing figure, unlike his counterparts, is not wearing a full frock coat, but a triple vented brown jacket with what appear to be narrow horizontal stripes of a darker hue. He wears an untrimmed cocked hat with the point forward over a white bob wig. His neckcloth is red and dotted with white. Blue breeches run down to white stockings beneath round toed shoes with rectangular white metal buckles. As with the better dressed man dancing across from him, our sailor carries a long thin walking stick.

Another sign of the maritime nature of this piece is in the man falling asleep in the detail above. His cocked hat, fitted with a single button, is worn reversed.
Posted by Kyle Dalton at 9:48 AM