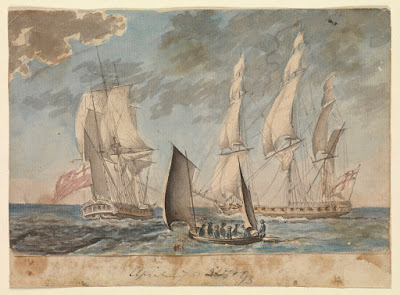 Gabriel Bray was a Royal Navy officer who kept a wonderfully candid book of illustrations during his service aboard the frigate Pallas on a voyage to Africa in 1775. I have featured many of his depictions in the past. Bray may offer us the most accurate depiction of sailors at sea from the period.

The focus of this piece, unlike most of his works, is on the vessels rather than on the people. Marine artists like Dominic Serres and (to a lesser extent) Samuel Scott, are largely known for their depictions of the vessels at sea. Cartoonists like Thomas Rowlandson and the various prints carried by Bowles are more likely to portray common sailors, but as caricatures rather than as true-to-life people. Bray occupies a space between the two, where he strives to accurately portray the people surrounding him, rather than a caricature or an object. While he is perhaps not the only one to do so, he is the most prolific artist of the type whose work survives.

"Two Small Royal Navy Frigates" is among the minority of his images that feature ships. Interestingly, even those images put people front and center. In this piece, a lugger cuts straight into view, ruining our perfect view of the frigate with her larboard broadside turned to us. It is as though Bray is interjecting the common man to remind us that ships are useless without men. The frigates are relegated to the background, and the men in their tiny lugger are in focus. 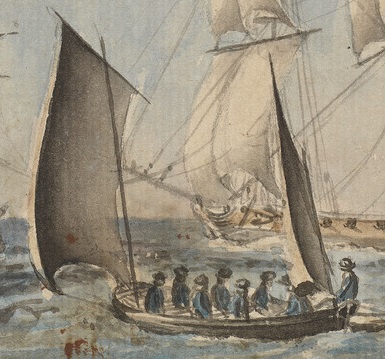 Despite that focus, the details are scant. Our eight man crew include six bargemen facing aft, a coxswain (who sits up on the starboard side at the stern) and a man who might be an officer. He sits facing forward and appears to have a bit more of a point to his hat, unlike the round hats worn universally by the blue jacketed crew. The details are too vague to be certain.
Posted by Kyle Dalton at 7:00 AM