The Jenny and Rose: A Sea of Conflict

"Blood streamed plentifully out of the privateer's scuppers."[1]

Danger defined the 1760 voyage of the slave ship Jenny.

Based in Liverpool, the full rigged ten gun Jenny was captained by Captain John Wilkinson. He and his crew of twenty or thirty five were casting off from England and into an ocean divided between warring powers.[2] It was the fourth year of the Seven Years War, and the sixth of the French and Indian War. Britain and her German allies wrestled with the French and Spanish on the European continent, while the French and British colonists fought in North America among a tangled web of alliances between native peoples.

This was perhaps the first truly global conflict. Battles raged on land in Europe, India, North and South America, and with naval engagements from the Pacific to the Mediterranean. Many merchant vessels had been taken by both sides. Roving privateers and letters of marque joined the commissioned naval vessels of major European powers to snatch up whatever prizes they could take.

Through these dangerous waters Wilkinson guided his vessel to Africa. The Portuguese had long had a foothold in Angola and Congo, and sold off enslaved people from major ports like Cabinda. It was from here that the Jenny departed with nearly 400 enslaved people in her hold.[3] 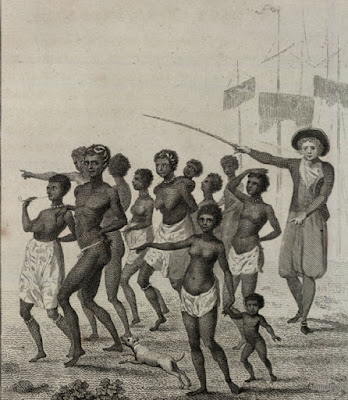 Detail from "Newly Arrived Enslaved Africans, Surinam, 1770s," Image Reference NW0265
as shown on www.slaveryimages.org, compiled by Jerome Handler and Michael Tuite, and
sponsored by the Virginia Foundation for the Humanities and the University of Virginia Library

After departing on March 4, 1760, Wilkinson led the Jenny across the Atlantic for an uneventful eight weeks. Wilkinson and his crew well knew that each passing day brought them closer to the prowling grounds of privateers. Confronting one of these vessels was to be their fate.

On April 29th, at approximately 12.58° North Latitude and 46.1° West Longitude, the Jenny was attacked by a fourteen gun French privateer sloop.[4]

The determined Frenchman, "full of men," attacked the Jenny and "was received so warmly that she was twice beat off."[5] Finding her a tough nut to crack, the French captain got creative. His crew affixed "Stink-pots at her Jib-boom End."[6]

John Hamilton Moore, in his The Practical Navigator, and Seaman's New Daily Assistant, describes the stink pot as thus:


The Boarder is generally furnished with an earthen Shell, called a Stink-pot, which, on that occasion, is suspended from his Yard-arms or Bowsprit end. The Machine is also charged with Powder mixed with other inflammable and suffocating Materials, with a lighted Fuse at the Aperture. Thus prepared for the Action, and having grappled his Adversary, the Boarder displays his Signal to begin the Assault ; the Fuses of the Stink-pot and Powder-flasks being lighted, they are immediately thrown upon the Deck of the Enemy, where they burst and catch Fire, producing an intolerable Stench and Smoke, and filling the Deck with Tumult and Distraction ; amdist the Confusion occasioned by this infernal Apparatus, the Detachment provided rush aboard Sword in Hand, under Cover of this Smoke, on their Antagonist, who is in the same Predicament with a Citadel stormed by the Besiegers, and generally overpowered, unless he is furnished with extraordinary Means of Defence, or equipped with Close-quarters, to which he can retreat with some probability of Safety.[7]

Stink-pots were certainly unpleasant, and could also be lethal. On September 7, 1759, the ship Britannia was attacked off Cape Maize by a French sloop. Captain George Massum later wrote that "a stink-pot at her jib-boom being run over our stern, dropped on the quarter deck, and killed the first mate."[8]

Wilkinson's options were limited. He was outgunned and outmanned. Moore gives two options: "Close-quarters, to which he can retreat with some probability of Safety," or an "extraordinary Means of Defence."

As a slave ship, the Jenny probably did have a barricado that could serve as a safe barrier between her crew and the boarders. It was, after all, designed to prevent a ship from being taken by her cargo. As the Marlborough revolt proved, a barricado is only useful if your enemy is on the proper side of it. Given subsequent reports, it appears that the privateer sloop may have been coming up on Jenny's stern. This would be the most logical place to drop a stink pot, as it would disable the helmsman and captain. From this angle, a barricado was useless as "Close-quarters."

This reduced Wilkinson to the second option, an "extraordinary Means of Defence." Widely reported after the fact, Wilkinson took the dangerous step of arming fifty of the enslaved men he had taken as cargo. The French sloop tried to sheer away from her final attack, but "her Topping-lift got foul of the Jenny's sprit-Sail Yard ; and had it not been for a Mistake of his Helm's-man, [Wilkinson] believes he should have taken the privateer." After six and a half hours of combat, the sloop bore away, while "Blood streamed plentifully out of the privateer's scuppers."[9]

Next time: A generation after the Jenny, the Rose repeats history.

Email ThisBlogThis!Share to TwitterShare to FacebookShare to Pinterest
Labels: Race Revolt and Piracy, The Jenny and Rose