Bostonians Paying the Excise-Man, or Tarring and Feathering, 1774 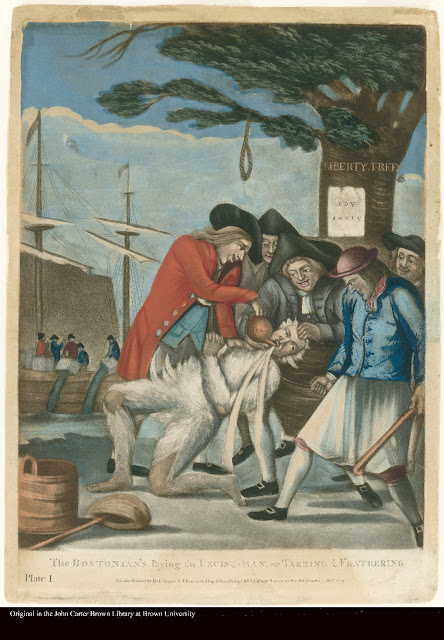 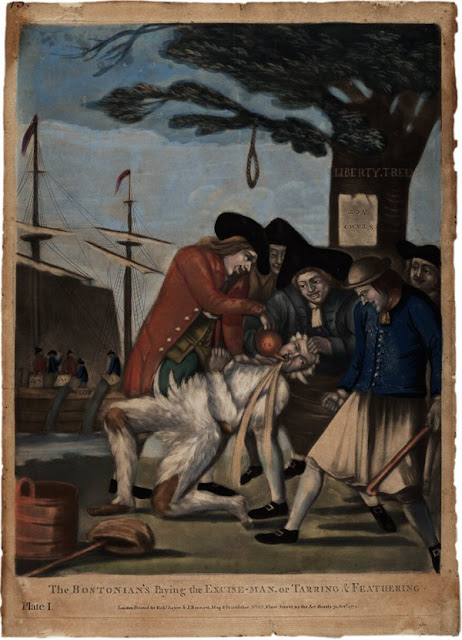 The Bostonian's Paying the Excise-Man, or Tarring & Feathering, attributed to Philip Dawe, published by Sayer and Bennett, 1774, Gilder Lehrman Institute of American History. 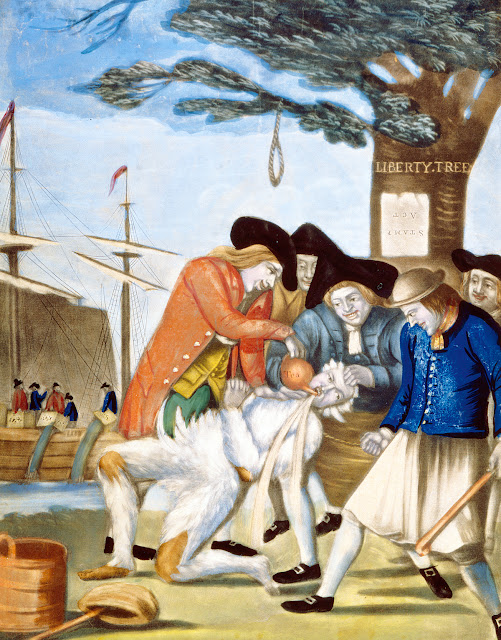 The Bostonian's Paying the Excise-Man, or Tarring & Feathering, attributed to Philip Dawe, published by Sayer and Bennett, 1774, Library of Congress via Lapham's Quarterly.

Philip Dawe's image, as printed by Sayer and Bennett, is a popular one. Original copies exist in many museum and private collections. The image of an American mob attacking a government official with a noose around his neck, a club by his side, tarred and feathered, with tea poured into his mouth is a shocking one.

While this image has endured, it is only half of the story. Sayer and Bennett published it as 'Plate I.' An accompanying piece, The Bostonians in Distress, was meant to accompany it. Plate I depicts Americans behaving badly, Plate II shows the consequences of their actions.

In March of 1774, the Boston Port Act was passed in Parliament. Created as a punitive measure in response to the Boston Tea Party, Parliament decalred with the Port Act that Britain would 'discontinue, in such manner, and for such time as are therein mentioned, the landing and discharging, shipping of goods, wares, and merchandise, at the town, and within the harbour, of Boston.'

Dawe was answering critics of the Port Act by demonstrating that the mobs of America had this coming. For his central subject he chose to portray John Malcolm. A known informant, he was targeted in 1773 by a large mob of sailors for a tar and feathering.


Undeterred, Malcolm became a customs commissioner. After an altercation with a shoemaker, Malcolm was tarred and feathered again in January of 1774, mere weeks after the Boston Tea Party. Obstinate, he refused to give into the mob's wish that he renounce his position, even after they strapped a noose around his neck (as Dawe depicts).

Malcolm's posture, pleading while being restrained with a kettle of tea poured into his throat, is a direct answer to the unidentified English artist of The Able Doctor, or America Swallowing the Bitter Draught. Published in October, Dawe's Bostonians Paying the Excise-Man came fully six months after The Able Doctor.


Given that sailors gave Malcolm his first drubbing, and that (in the words of John Adams) 'outlandish jack tarrs' formed the center of America's 'motley rabble,' it was natural for Dawe to put a sailor in the foreground. The inclusion of a sailor, standing prominently on the right edge of the frame and wielding a weapon, also appears to be an answer to The Able Doctor. 'Sure,' he says 'our sailors shut down the port, but your sailors made us do it.'

The colorists for these prints are fairly consistent. All portray him as wearing a blue jacket (white metal buttons, except the John Carter Brown copy with cloth covered buttons), white petticoat trousers, and white stockings. His cap is a shade of brown, except for the John Carter Brown copy where it is a sort of purple, matching the breeches that peak from beneath his petticoat trousers. The sailor in the Library of Congress copy wears white breeches that match the shade of his petticoat trousers, which might be the same as the Gilder Lehrman copy. The neckcloth is different between all three versions, vacillating between striped and patterned, spotted or perhaps floral, orange and yellow or blue and red.
Posted by Kyle Dalton at 9:52 AM