Scenes from the American Revolution, Plate 12, 1784 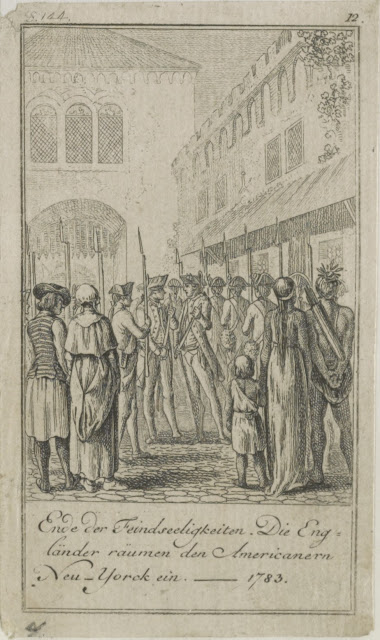 The final in a series of prints by Daniel Chodowiecki depicting scenes from the course of the American Revolution, this print depicts the evacuation of New York by the British army. Chodowiecki depicts a family of Native Americans looking on, or at least Native Americans as he imagines them. He clothes the woman and child in diaphanous robes as though they were in ancient Greece, and the man wears a waist cloth and a quiver of arrows over his shoulder.

To the left of the frame are another pair of onlookers: a woman in European dress, and a sailor.

The sailor wears a round hat with brim slightly upturned. His hair is well kept, and hands above the collar of his horizontally striped waistcoat, which is triple vented. Clean petticoat trousers end just about the knee, where dark stockings (or stockings that are just in shadow) run down to shoes that might be mules or slips.

It is worth noting that the artist is clearly drawing inspiration from Central Europe, rather than from America or Britain. His depictions of others in this print and the other eleven plates, along with the architecture shown there, are all derived from European inspiration. Chodowiecki's depiction of this sailor may be more accurate for a German Matrose than an American or English sailor.
Posted by Kyle Dalton at 8:00 AM