Gregory Theberge, at his 18th Century Material Culture Resource Center, put together an excellent slideshow of naval foodways in material culture. Through his research, with some backing from the American Revolution: Portraying the Sailor group on Facebook, Gregory found a surprising constant in British naval messes of the eighteenth century: staved tankards. 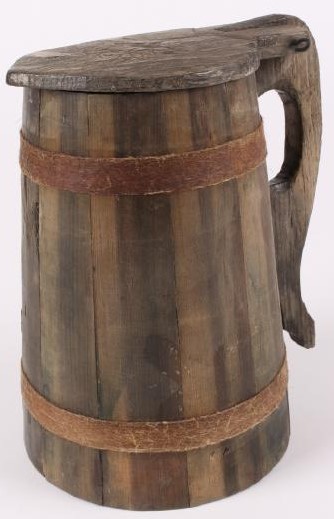 The example above was excavated from the 74 gun man of war Invincible, wrecked in 1758 in the English Channel.[1] Another was found on the other side of the Atlantic, from the wreck of the 14 gun sloop Swift which sank off Patagonia in 1770.[2] Archaeologists also turned up a staved tankard from the 1779 wreck of the American privateer brigantine Defense off the coast of Maine.[3]


Staved tankards in a maritime context pre-date my era of study by centuries. From wrecks as early as the 1545 Mary Rose archaeologists have recovered staved tankards. They continued to be used after my period of study, as you can see in Thomas Rowlandson's study for the 1799 print A Ship's Cook, in the collection of the National Maritime Museum.

Curious as to why the staved tankard was so present in the maritime world, I turned to Marshall Scheetz, owner and operator of ﻿Jamestown Cooperage, LLC. As a sort of modern John Nicol, Marshall Scheetz makes staved tankards by hand in the same fashion as eighteenth century coopers at sea:


While a shipwright creates the vessel in which men sail, the cooper creates the vessels that hold the provisions that men need to survive at sea for extended periods of time. To me, the supply lines of the 18th and 19th century British Navy were wonders of the contemporary world. The Victualling yards of Portsmouth, Plymouth, Deptford, and Harwich were marvels of food processing in the early years of the Industrial Revolution.  Most of these provisions, victuals, etc were stored and shipped in casks made by armies of coopers. The coopers were often specialized in making standardized casks for specific types of products; salt beef or pork, butter, beer, liquor, peas, bread, flour, etc. And, there were always coopers aboard official Naval vessels, in promoted positions, to maintain stores and to see that casks were stowed properly.

So why staved tankards?


Wooden drinking vessel make sense for sailors.  A wooden vessel won't shatter when knocked over during high seas and the flared shape offers a lower center of gravity making it difficult to tip over. Many metals will corrode when exposed to salt water, but wood thrives in the environment. Many tankards were bound with wooden hoops, sapling or split. The importance of coopers to ocean going vessels can not be overstated. This puts coopers in every port and on most vessels.  Because of coopers proximity to sailors and the enormous government contracts and elevated status given them it's natural that coopered bowls and drinking vessels would be ubiquitous at sea along side "scuttle butts," water tuns, butter firkins, and wine hogsheads.