The Midday Meal in the Cabin on the Ship Providence after the Cabin Table had been Broken by the Storm on the Night of April 15 to 16, 1776 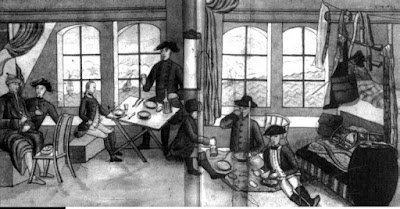 The Midday Meal in the Cabin on the Ship Providence after the Cabin Table had been Broken by the Storm on the Night of April 15 to 16, 1776, artist unknown, April 19, 1776, in The American Revolution, Garrison Life in French Canada and New York, Helga Doblin, trans., Mary C. Lynn, ed., Westport, Ct.: Greenwood Press, 1993, via John U. Rees, 'A wave struck the ship, the soup flew out of my bowl …': Food and Accommodations for Soldiers at Sea during the War for Independence, Courtesy of Eric Schnitzer.

Special thanks to John U. Rees for bringing this to my attention.

Julius Friedrich von Hille, an ensign in the Braunschweig Prinz Friedrich Regiment, was shipped to America to fight in the American Revolutionary War along with thousands of his German and British comrades. The vessel carrying von Hille was the Providence. On the night of April 15, she sailed into, as von Hille put it, an 'unusually agitated' sea. The heavy storm battered the vessel, and destroyed the table in the cabin where the officers shared their meals.

Depicting the tranquility of the sea mere days later, von Hille drew the German officers at mealtime making do without the table. Joining them is at least one mariner in the dress of a common sailor.

Resting his bowl on the seat of a Queen Anne style chair, this sailor wears what might be a linen cap, a loosely fit single breasted jacket with turned back cuffs (maybe a watch coat?), and petticoat trousers hanging down below the knees.
Posted by Kyle Dalton at 7:00 AM