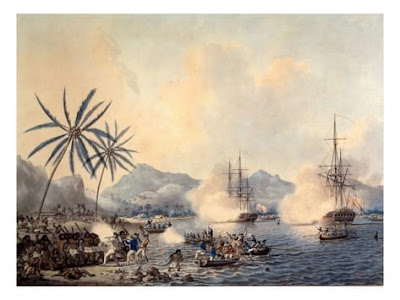 The Death of Cook, John Cleveley the Younger, 1784, collection unknown. 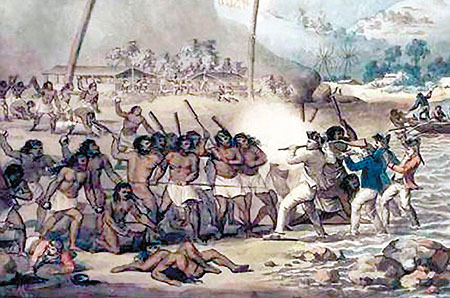 Detail from The Death of Cook, John Cleveley the Younger, 1784, Wikimedia Commons. 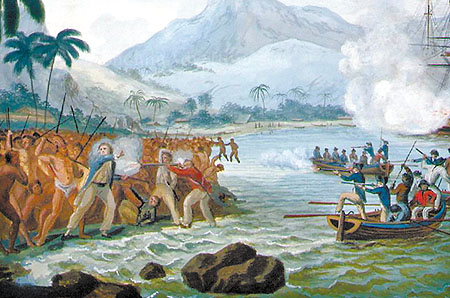 Detail from The Death of Cook, John Cleveley the Younger, c.1784, Honolulu Academy of Arts via Wikimedia Commons. 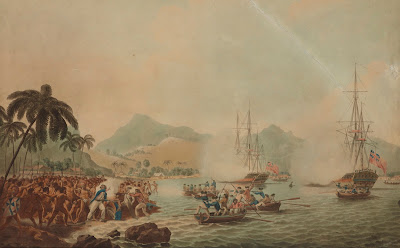 View of Owhyhee, one of the Sandwich Islands (Known as The Death of Cook), John Cleveley the Younger, published posthumously by Frances Jukes, 1788, Museum of New Zealand Te Papa Tongarewa.

James was lucky enough to join Captain Cook's fateful third voyage aboard the Resolution. It is quite possible that he personally witnessed the death of Captain Cook, and so could inform his brother John's work on the subject.

For centuries, copies of Cleveley the Younger's depiction of Captain Cook's death could be found in collections around the world, including some of those shown above. In 2004, the original painting turned up for auction at Christies, where it caught more than three times the expected price. Much of this was due to the difference between the original and the copies.

As reported at the time, Cleveley showed Cook clubbing his musket and fighting with the natives of Hawaii, rather than fleeing as in the subsequent, sanitized versions. 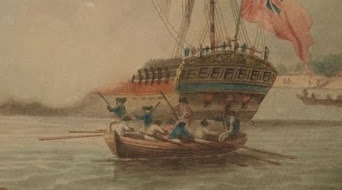 The sailors themselves are clad in red, brown, and blue jackets, with white trousers, and one or two trousers with narrow vertical red or blue stripes. One oarsman even appears to be wearing a striped jacket. Round hats make up the headwear of the common sailors in Cleveley's piece.