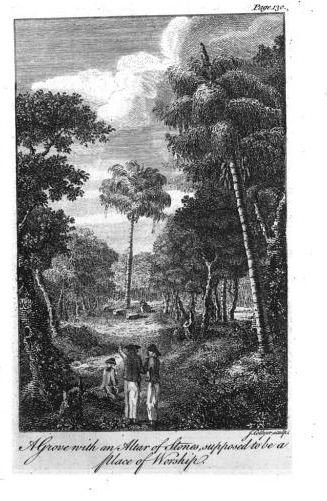 A Grove with an Altar of Stones, supposed to be a Place of Worship, J. Collyer, 1767, Google Books.

Yet another image drawn from the book A Voyage round the World in His Majesty's Ship the Dolphin, this print is far less fanciful than the last, which featured gigantic native people accepting a Jack Tar's biscuit. Though less exciting, it does give us a good look at a pair of sailors in the middle foreground. 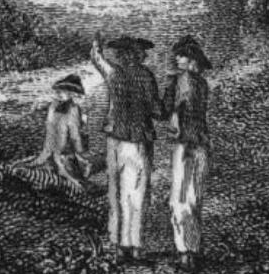 An officer with a bagged queue sits on the left, but we're focusing on the sailors in the center. Both of them wear cocked hats, though it is difficult to tell how the fellow on the left is wearing his. The seafarer on the right appears to be wearing it backward, though it could be cocked very far to his left. Each of them wears a short jacket with three vents along the back, and waist pockets. They also both wear a pair of white trousers.
Posted by Kyle Dalton at 11:00 AM