Things have been a bit crazy around my quarters lately! I haven't the time (yet) to devote to the promised post in which I will examine my use of the term "slops" and whether or not that's actually an appropriate use of the term, nor to continue my series on headgear.

I would love to continue examining specific images (that tends to be a lot easier and quicker), but I have nearly exhausted the collections you'll find on the right. Please, if you have any other sources, pass them my way!

But don't let it be said I've forgotten you, kind reader. In the stead of more in depth examinations, let's have a look at this fun little bit I found at the Library of Congress while working on a separate project!

Not long ago, a pseudo-historian argued that in the entire "founding era" of the United States, only two gun accidents had ever occurred. This was intended as a buffer for some modern political argument, but it is frankly bad history. In the remarkably readable blog Boston 1775. the historian J.L. Bell did a thorough take-down of the clearly false argument, rendering this anecdote little more than a fun diversion, rather than a serious attempt to discredit a clearly false assertion.

In the November 17, 1740 edition of the South Carolina Gazette, the domestic intelligence reported thus: 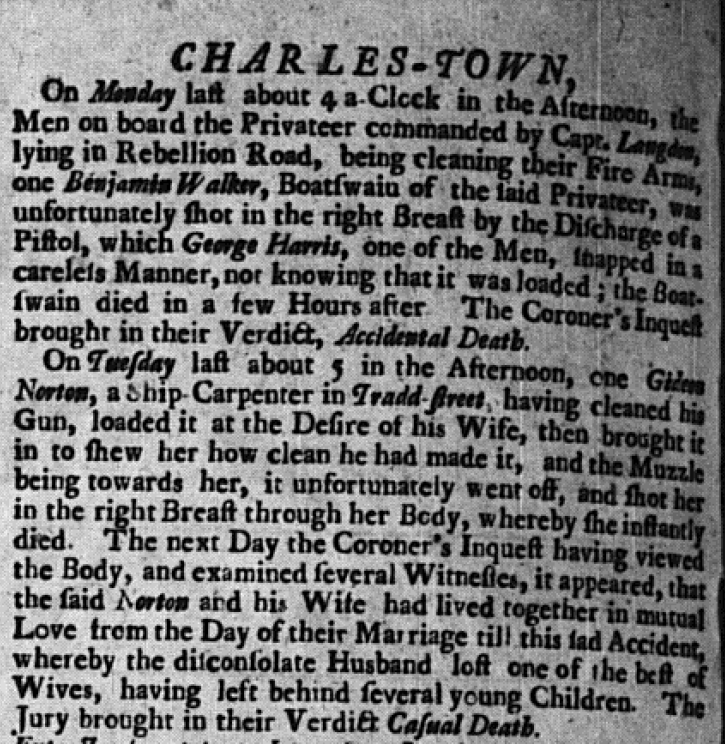 For the sake of making this easier to search, I have taken the liberty to transcribe it.

On Monday last about 4 a-Clock in the Afternoon, the Men on board the Privateer commanded by Capt. Landgon lying in Rebellion Road, being cleaning their Fire Arms, one Benjamin Walker, Boatswain of the said Privateer, was unforunately shot in the right Breast by the Discharge of a Pistol, which George Harris, one of the Men, snapped in a careless Manner, not knowing that it was loaded ; the Boatswain died in a few Hours after. The Coroner's Inquest brought in their Verdict, Accidental Death.

On Tuesday last about 5 in the Afternoon, on Gordon Norton, a Ship-Carpenter in Tradd-street, having cleaned his Gun, loaded it at the Desire of his Wife, then brought it in to shew her how clean he had made it, and the Muzzle being towards her, it unfortunately went off, and shot her in the right Breast through her Body, whereby she instantly died. The next Day the Coroner's Inquest having viewed teh Body, and examined several Witnesses, it appeared that the said Norton and his Wife had lived together in mutual Love from the Day of their Marriage till this sad Accident, whereby the disconsolate Husband lost one of the best of Wives, having left  behind several young Children. The Jury brought in their Verdict Causal Death.

I know a lot of reenactors and collectors follow my blog. Take note: guns, even two century old flintlocks, are deadly. Be safe out there!