Recreating The Motley Crew of the Scorpion

On August 23, 1776, the Virginia Gazette published by Purdie, ran this advertisement for runaway sailors. 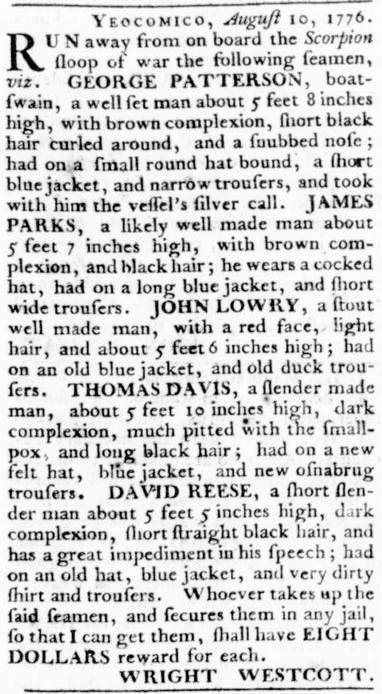 These five men abandoned the Virginia Navy's sloop of war Scorpion, Wright Westcott master. The Scorpion and her crew were later captured by the British in 1781, but saw quite a bit of running between the West Indies and the Chesapeake in that time.

For the sake of making it easier to search for this particular ad, I'm going to transcribe it here:

Much of this is fairly unremarkable. The clothing is exceedingly common. What is interesting is the numbers that fled, as runaway sailors are most often advertised for in ones and twos, and the fact that the Boatswain deserted! Patterson even took the bosun's whistle: the abovementioned "vessel's silver call."

As something of an experiment, I will attempt to match the sailors to a contemporary image that matches their description, to give us a ballpark visual estimate of what this crew may have looked like.

James Parks - "a cocked hat, had on a long blue jacket, and short wide trousers"

Obviously, we don't know precisely how they looked. We don't know the material of most clothing they wore, and waistcoats go entirely unmentioned. Still, this collection of contemporary images, matched to the descriptions provided to us, might give us a ballpark visual estimate of what a crew may have looked like.
Posted by Kyle Dalton at 11:00 AM