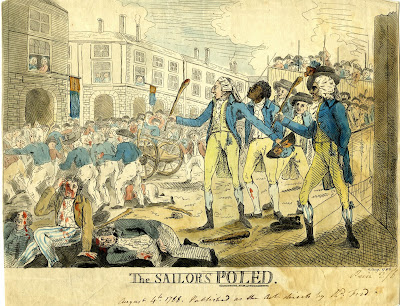 This is not the first time I've featured an election themed print on this blog. Just like Hogarth and Gilray, though clearly not as skilled as either of those two esteemed caricature artists, this anonymous illustrator includes sailors in the violence surrounding English elections. George Hanger, the fascinating veteran officer of the British Legion, commands these tars as they disperse a group of opposition supporters. At least, I think he is. I'm still a bit fuzzy on his exact placement in politics during the late 1780's, so please feel free to comment and correct me!

For our purposes, we're going to focus on the sailors under Hanger's command, as well as those sailors who are his victims. 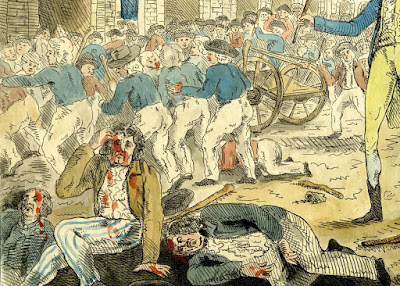 In the foreground on the left, there are three sailors nursing bloody wounds. All three wear short jackets, with two of them in blue and one in brown. None of them wear waistcoats, though all wear trousers, with the tar in the middle wearing striped trousers.

Behind them charge a line of seafarers, driving away their prey. Those that wear hats are clad in common black round hats. All of them have white trousers that fit fairly tight to their legs, rather than wide legged.
Posted by Kyle Dalton at 11:00 AM