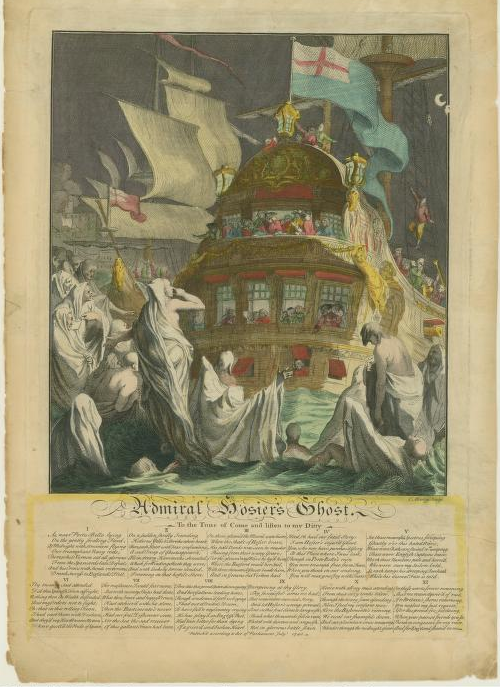 In 1726, Admiral Francis Hosier led a British squadron to Porto Bello, with the intention of blockading the port and taking the Spanish treasure ships. Sadly, government orders prevented him from actually attacking the town, and his ships stagnated off the coast, withering away into disease. Hosier died along with as many as 4,000 of his sailors and fellow officers. The blockade disintegrated with nothing gained by the British.

In 1740, the poet Richard Glover exonerated Hosier through the victory of Admiral Vernon. Vernon's 1739 capture of Porto Bello was a legendary feat that secured him a place in the pantheon of British national heroes, arguably only surpassed by Lord Nelson half a century later. Glover's poem was set to the tune of "Come and Listen to my Ditty" and illustrated above by Charles Mosley. It depicts the ghosts of Hosier and his men rising from the sea out of their hammocks and congratulating Vernon, while also cautioning him to remember Hosier's fate:


'Unrepining at thy glory,
'Thy successful arms we hail,
'But remember our sad story,
'When to Britain back you sail!
'All your country's foes subduing,
'When your patriot friends you see,
'Think on vengeance for my ruin,
'And for England sham'd in me.

The image is thick with sailors all about Vernon's 70 gun flagship HMS Burford. Don't forget that you can click on any image to enlarge it for greater detail! 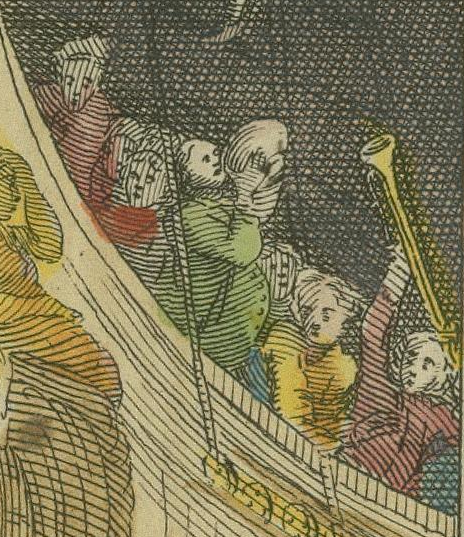 A bundle of tars are busily celebrating on deck, with only some of them realizing that a herd of ghouls are rising at their stern. One lifts a bowl of punch to his lips, another wields a trumpet, but most eyes are transfixed on the ghosts. All of them wear single breasted jackets, and most are bare headed. The chap on the far left appears to be wearing a short of work cap. Their jackets are mixed in color from green, to yellow, to red. 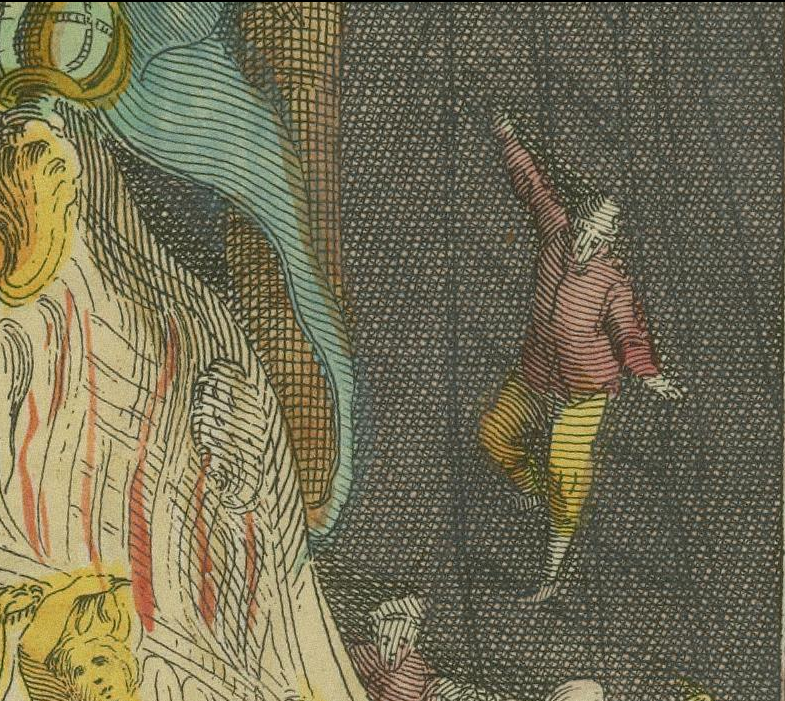 Clinging to the ratlines is a visibly shocked tar. He wears what appear to be slops/petticoat trousers that are yellow in color, and certainly wears a single breasted red jacket that ends about his waist. Atop his head is a cap, probably a knit cap, though there isn't enough detail to be sure.

Admiral Vernon (leaning on the rail at center) is flanked by his officers and other gentlemen. At the far left is a sailor looking rather distressed by the scene. Jack wears a green single breasted jacket not unlike his mates on deck. Unlike them, he wears a cocked hat reversed.

Beneath Vernon's perch are a number of tars caught between revelry and horror. The sailors on deck down are also caught in the midst of their celebration, with punch bowls and pipes galore. Some appear to be wearing bob wigs, but one can certainly be said to be wearing a hat: the tarpaulin in the far right window with a red jacket. His is a cocked hat with its point turned forward.

You would think that the site of 4,000 ghosts rising out of the foaming deep would be more impressive to a common sailor, but this fellow only seems mildly bemused. He wears a workman's cap and a red jacket.