Some time ago, I featured a mysterious piece on my blog that I couldn't positively identify. I have finally tracked down the original piece. Originally published in 1773, and continually published well into the nineteenth century, the Newgate Calendar was a sensational collection of stories detailing the trials of famous criminals who spent their time in the infamous prison. The illustration here was drawn from an edition of that widely printed and popular collection, and depicts Captain James Lowry murdering common sailor Kenith Hossack. 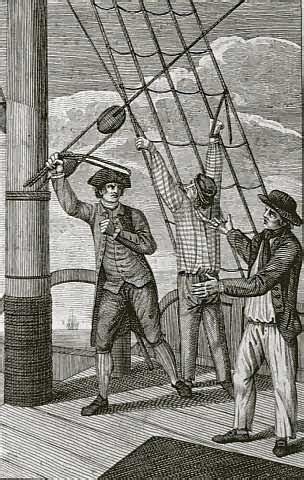 In 1750, Captain James Lowry commanded the Molly merchantman on a voyage from London to Jamaica and back again. His crew quickly grew to despise their master as he berated and beat them. On the return voyage from Jamaica, a formerly sick tar Kenith Hossack tripped on the quarterdeck, drawing the ire of the fickle and violent captain. Lowry ordered him to be tied up, and beat him repeatedly over the course of at least half an hour, particularly about the head and neck. Several sailors later testified that they had never witnessed so brutal a beating, and it led to the death of Hossack.

The crew deposed their captain, placing him under a sort of cabin-arrest. Lowry managed to get a message ashore in Lisbon that he had been the victim of mutiny, and had the crew transported back to England on a man of war. It appears that the British consul in Lisbon and the officers of the warship were not terribly confident in Lowry's righteousness, as the crew was not kept under lock and key.

As soon as they returned to England, the crew, officers and all, sought legal recourse for the murder of their shipmate. Lowry evaded the officers of the law, but eventually was taken by a thief-taker. Brought to trial at the Old Bailey, and examined under Admiralty Law, he was found guilty of murder and hanged.

Thanks to the Old Bailey Online, you can view the complete and unfiltered trial transcript of the infamous tyrant! You can read the rarely recorded words of common sailors on a merchant voyage, and glean some little reported facts of their lives. I found it particularly interesting that (counter to popular culture depictions) eighteenth century sea captains were not as quick to apply corporal punishment as their naval counterparts.

John Hunt, a veteran sailor, testified in the 1752 trial: “I never saw a man flogged on board a merchantman in my life.” Another sailor, William Waum, echoed this experience: “I have used the seas as 12 years, and I never saw a man tied up on board a merchantman before in my life, and whipped.” Both men admitted seeing a good deal of flogging on naval vessels, but the expectation for merchantmen was apparently quite different.

I was also intrigued to read some of the terms that so easily escape our notice. "Shamming Abraham" is a term that appears to be common among sailors of the time, and describes faking illness to escape work or gain special treatment. It was used often enough to merit a place in Francis Grose's famous 1785 Dictionary of the Vulgar Tongue.
Posted by Kyle Dalton at 8:00 AM