The Rival Candidates and their Old Supporters, 1784 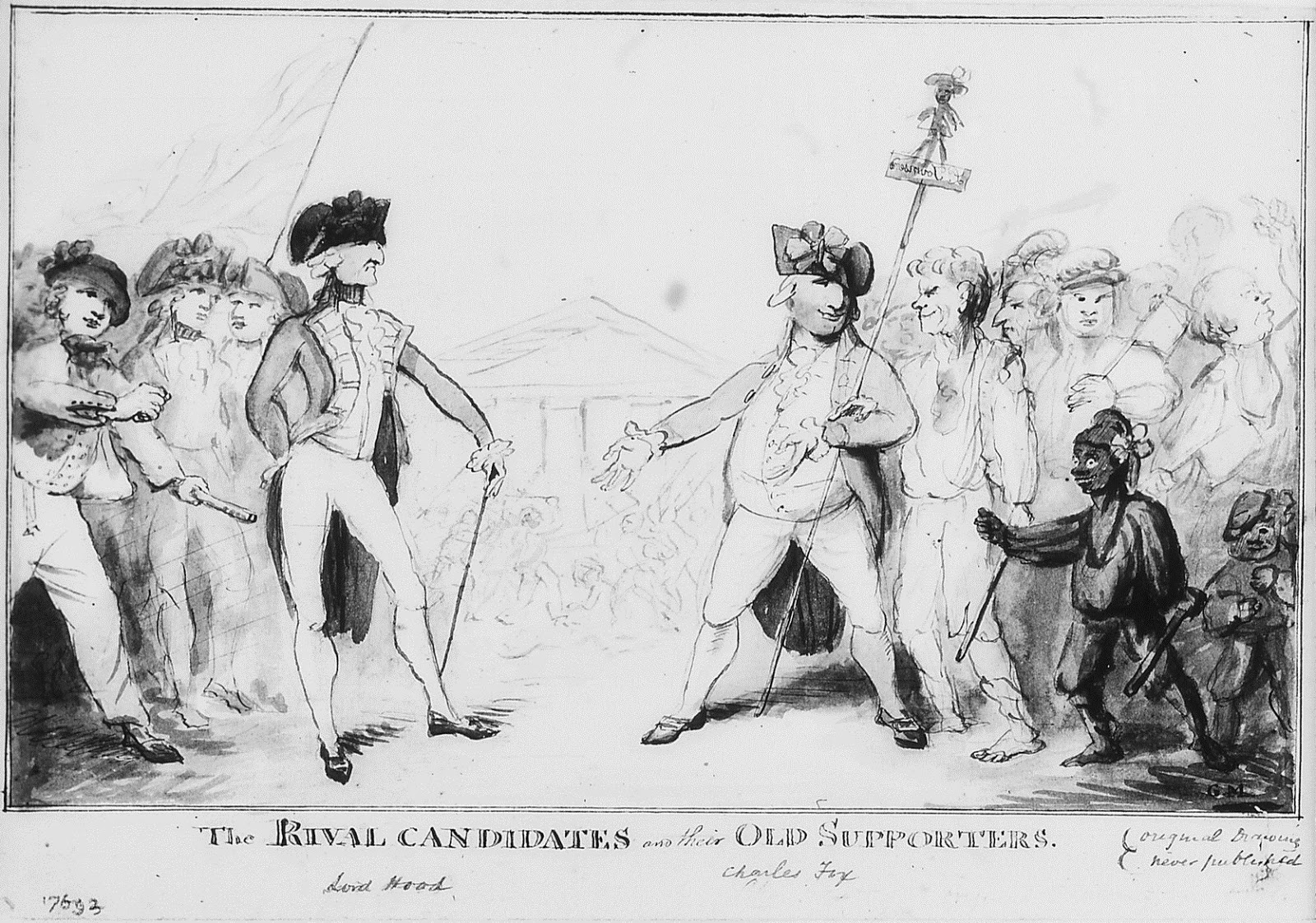 In the wake of the British loss in the American Revolutionary War, King George III dismissed the ministry and new elections were called. The followers of Pitt the Younger came up against the Whigs of Charles Fox (pictured on the right here). Facing off with Fox is Admiral Lord Hood, who served throughout the final years of the Revolutionary War, participating in the Battle of the Capes and the Battle of the Saintes.

The bent of G.M. is clear in this caricature: Fox's supporters are blackened chimney sweeps and low class brutes with clubs. Hood's followers are gentlemen in cocked hats and a clean Jack Tar.

The happy sailor wears a narrow brimmed round hat with a bow on his right side, not unlike those portrayed in numerous Bowles prints. At his neck is a black neckcloth all bound up in a mess. His waistcoat is either tucked into his white trousers, or ends immediately at the waist. I'm leaning toward the latter, as his jacket is very short and ends right at the waistband as well. The waistcoat is set with three rows of buttons down the front. Or perhaps the flap of the jacket is hanging down so as to give the appearance of it, when really the waistcoat is double breasted and the jacket single. Either way, his five button mariner's cuffs are open, giving us just a peek at his shirt cuff, but not enough detail to really say anything about it.

In his left hand he clutches something, but I cannot say with any confidence what it is. A walking stick or rattan would seem most likely, but if so we should see the back half of the shaft between his arm and his jacket. It might be a roll of paper, but that would be an odd way to hold it. I don't believe it is a cudgel, as the artist is trying to differentiate the supporters of Hood and Fox.

Another notable accessory to our tarpaulin's slop clothes is the watch ribbon and fob hanging from his right. I don't rightly recall seeing any other sailor of the era wearing such a piece. This addition may be a further effort by G.M. to place Hood's supporters on a higher level.
Posted by Kyle Dalton at 8:00 AM