A View of the Church of Notre Dame de la Victoire, 1761 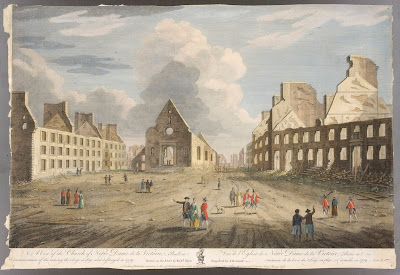 A View of the Church of Notre Dame de la Victoire, built in Commemoration of the raising the Siege in 1695 and destroyed in 1759, Richard Short, engraved by A. Bennoist, 1761, University of Michigan Celements Library.

Thanks to longtime reading Adam Hodges-LeClaire for pointing out this print to me!

The city of Quebec was long the target of British ambitions. Numerous battles and sieges centered around Quebec, going back to the seventeenth century. In 1690, the French broke one of these sieges and in celebration rechristened the church l'Enfant Jésus as Notre-Dame-des-Victoires. Construction on this church began in 1687, but wasn't completed until 1723.

Though the next few decades the town weathered British attacks, but finally fell after the famous Battle on the Plains of Abraham in 1759. During the long siege leading up to the Plains of Abraham, the British reduced much of the town. Short, in the print above, depicts British military tourists taking in the sight of the lower town.

Short's centerpiece for this destruction is the Notre-Dame-des-Victoires. His choice of the church demonstrates British redemption, the power of British artillery, and the well known anti-Catholicism of Georgian Britain.

Among the grenadiers, soldiers, and civilians touring the ruins of the Quebec's lower town are a number of tarpawlins. 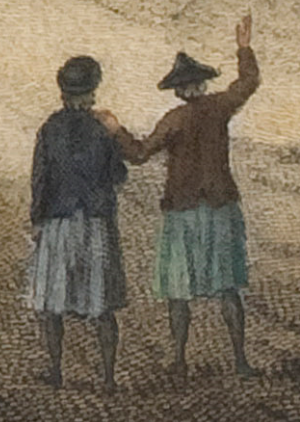 At the lower right corner of the frame are a pair of sailors observing the wreckage. The chap on the left wears a narrow brimmed round hat with round crown over his short hair. His blue jacket has a single vent at the back, and rests over his blueish-white petticoat trousers/slops. Beneath them are a pair of black stockings (or white stockings shaded by the engraver or colorist).

His mate on the right wears a cocked hat with the point forward over bob-style hair. His brown jacket also has a single vent at the back, This seaman's petticoat trousers/slops are the same length as his mate's: just about the knee, but they are a sort of greenish-blue. 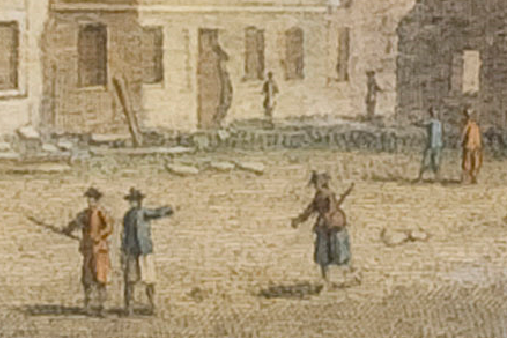 Unfortunately, the detail on the figures close to the church are sparse. Their hats are almost impossible to make out, and the most we can say beyond color (blues, browns, and white) is that they wear jackets that end above the top of the thigh, and petticoat trousers/slops that end about the knee. We can also say that they carry walking sticks.
Posted by Kyle Dalton at 7:00 AM