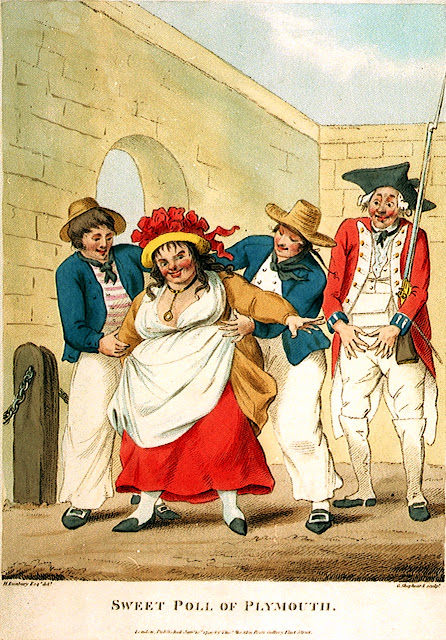 Sweet Poll is a wicked looking prostitute drawing the attention of two tarpawlins and a creepy looking marine. The colorist of this print has done a fairly good job with the shading and careful application of color, except on the marine whose cartridge box blends into his small clothes, and cuffs fail to match the lapels.

This print is at the very tail end of our period of examination, and so the sailors look markedly different from those of earlier decades. Notably, both wear straw hats. I know of only one other depiction of sailors from our period of study that clearly and definitely shows a straw hat, and even that source I had to question. This is the first positive and definitive depiction of straw hats being worn by sailors in my period of study, and it comes at the very last year of that period.

Our first jack wears a wide brimmed straw hat, and has his hair bound in a queue (another change from previous decades in which short, bob-style hair was the most common). A blue jacket ending just below the waist and with folded back cuffs rests over a double breasted white jacket with cloth covered buttons. His trousers are white and end at the ankle, showing off pointed toe shoes with rectangular buckles.

His mate wears a straw hat with a shorter brim, and short hair. It appears his hair is without a queue, but not definitely so. A short lack neckcloth hangs over his waistcoat with its horizontal red stripes and cloth covered buttons. The blue jacket is single breasted with cloth covered buttons and an odd folded back cuff that also appears to be a double buttoned mariner's cuff. His trousers are slightly longer than his mates, but still show the same shoes and buckles.

For posterity, here's Sweet Poll in all her glory: 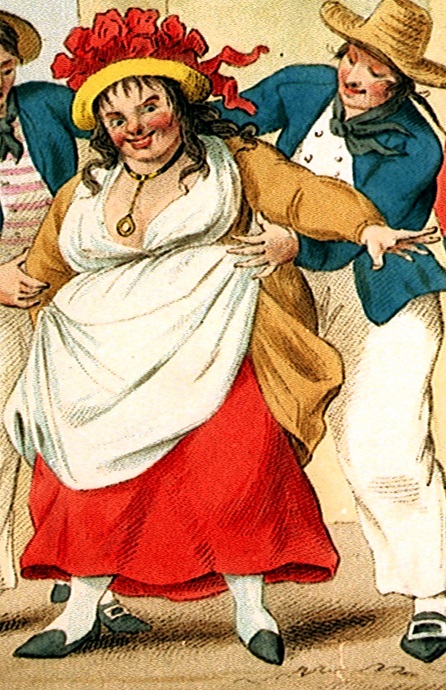